Facing a DUI charge makes the the old saying that “there’s good news, and bad news” as true as ever. In this short article I want to cover 2 things about a DUI: what will happen to your license and what goes on your record. An OWI charge always comes as bad news. We have to start with that, but there is some good news here, as well, because the consequences to your driver’s license and your record aren’t nearly as bad as you probably fear right now. 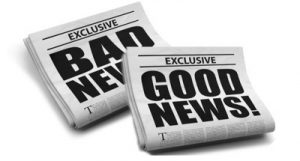 It’s normal for people to freak out over a DUI arrest. Unfortunately, most lawyer websites do little (or nothing) to alleviate such stress because the prevailing trend in legal marketing is fear-based. Whether intentional or not, the idea is to point out all the bad things that could ever possibly happen in order to motivate (scare) someone to call for help. I hate that tactic, and have always taken the opposite approach. For example, I like to point out that, almost without exception, jail is NOT on the menu in a 1st offense DUI case, at least here, in Oakland, Macomb or Wayne Counties.

That said, there are plenty of real-world consequences that will happen as a result of a DUI. The good news, however, is that what most people fear will never come to pass. Make no mistake, success in a DUI case is always measured by what does NOT happen to you. Proper legal handling of a drinking and driving case is the key to avoiding and/or minimizing all the potential consequences and penalties.

This leads us to the first point of this article: something WILL happen to your driver’s license in any DUI case that is not thrown out of court. License sanctions are unavoidable, but – and this is key – that doesn’t mean you’re going to lose the ability to drive. In fact, you won’t.

Before we talk about how your license can be “saved,” let’s look at what is and is not going to happen to it. This should calm some readers down a bit.

By law, if a person is convicted of an OWI offense, the Michigan Secretary of State must impose some license sanctions. The court plays no part in this, and hasn’t for more than 20 years now. All license penalties are set by law, and they cannot be changed or modified in any way. There is no “hardship” appeal or anyway to change what the law specifies.

The good news is that in a 1st offense case, a person’s driver’s license is never taken away. Instead, the only thing that can happen is that, depending on the final charge to which a person pleads guilty, it may or may not be suspended briefly, and will be restricted for either a longer or shorter period of time thereafter. Let’s see exactly what I mean:

OWI (Operating While Intoxicated): License suspended for 30 days, and then restricted for 5 months thereafter.

High BAC (OWI with BAC of .17 or Greater): License suspended for 45 days, and then restricted for 10 and 1/2 months thereafter, but the person must also drive using an ignition interlock unit for that period.

This means that in no case will a 1st offender “lose” his or her license.

Moreover, the majority of DUI charges can ultimately be negotiated “down” so that person who is charged with a more serious DUI offense can get a plea-bargain to a lesser charge and thereby avoid the license and other penalties he or she faced under the charge first made against him or her.

Even if that doesn’t happen, though, the very worst thing a person facing his or her first offense will have to do is make it past one of these short stints without driving. Sure, that sucks, but it doesn’t suck nearly as much as having your license taken away altogether, does it?

The way to minimize what happens to your license is to make sure you get the best outcome possible in your case. Plea bargains have to be negotiated; they don’t appear out of thin air. How to wrangle the “best” deal in any particular situation depends on a lot of factors, and that’s where a lawyer’s experience comes in to play.

If the evidence has been mishandled or is compromised in some way, that will be discovered by carefully examining it. In order to “beat” a DUI case, you have to understand both the law, and how the Judge in your court applies it. What works in one court won’t fly in another. Moreover, the “cost” of an unsuccessful challenge to the evidence can mean there will be no plea bargain.

These general observations play out in very different and specific ways within the various courtrooms of the Tri-County area.

I often receive emails from people asking “do I need a lawyer for this?”

The answer is simple: if you want it done right, yes. You can also build your own TV, but good luck with that, as well.

And before you chalk this up to shameless self-promotion, I’d ask the reader to note that I’m not jumping in here and screaming something like “that’s why you should hire me!” As good as I may be, or think I am, an important part of finding the “right” lawyer is finding one who is a good fit for you. No lawyer is the right lawyer for everyone, not even me.

Beyond that, my DUI practice (but NOT my driver’s license restoration practice) is geographically limited to the Metro-Detroit area (Oakland, Wayne and Macomb County), so although my advice here is universal, my practice is local: not only should you have a lawyer, you should always have one who is familiar with the court where your case is pending, and NOT from the other side of the state.

If you’re facing a High BAC charge, for example, then the goal, if your case can’t be dismissed outright, is that it be plea-bargained all the way down to OWVI (Impaired Driving), or at least to OWI (Operating While Intoxicated,) so that the consequences to your license are less severe.

Obviously, if you’re charged with OWI, then the goal is to reduce the final charge to Impaired Driving. Remember, in the DUI world, less is always more, and always better.

As I noted earlier, the license sanctions are imposed automatically by the Secretary of State, and as a direct and unchangeable consequence of the the final charge that goes on your record.

This, conveniently enough, brings us to the second point of this piece: something WILL go on your record. This topic will take far less time and space to clarify.

There are lots of legal reasons for this, some of which you need to be a criminal lawyer, really, to understand. Therefore, we’ll skip the long, technical explanation and get to the point: a DUI charge CANNOT be kept off of, or later removed from, your record.

Michigan law specifically prohibits any traffic offense, including alcohol-related traffic offenses (this includes any OWI or related offense), from ever being removed from a person’s criminal or driving record. It also precludes any kind of “under advisement” deal, where you pay the fine and do the probation, but nothing (or something different) goes on your record (either criminal or driving).

As if that’s not enough, all DUI cases are tracked from arrest through final disposition by the Michigan State Police as part of a legally required annual drunk driving audit. Thus, every part of DUI cases must be handled above-board and reported, because they are, quite literally, tracked.

What’s more important here, however, is that you understand how a DUI will almost never be a problem in the future, as long as you’re not hoping to be something like an ambulance or school-bus driver, or otherwise rely upon a CDL (commercial driver’s license) for a living.

Over the course of my 28-plus years as a DUI lawyer, I have heard countless people worry aloud about losing their job over a DUI, only to almost never see it happen.

Sure, there can be some complications to your work if you drive a company vehicle, but most people who fear severe employment consequences over a DUI manage to get through it. Even if you have a professional license through LARA, the consequences tend to not go beyond being embarrassed because you are obligated to report your DUI.

Beyond that, there isn’t a Judge out there who will “cost” you a job over a drunk driving case. Sure, some courts require you to jump through more hoops than others, and aren’t know to be overly helpful about how and when you do that, but never at the expense of your job. Short of being a taste-tester for a liquor distillery, the court system is far more interested in making sure you KEEP your job over anything else.

Otherwise, how would they get paid?

Thus, we have the bad news – that as a result of a DUI, something will happen to your license and something will go on your record – and then we have the good news – that you won’t lose your license altogether and that the fallout over a DUI on your record will almost certainly range from nothing to minimal. You will get through this, and almost certainly a lot more intact that you might think.

If you’re facing a DUI, do your homework as you look for a lawyer. Look for real information instead of scare tactics. Read around, and the check around. If your case is anywhere in Oakland, Macomb, or Wayne County, I can help. All of my consultations are confidential and done right over the phone, when you call in. We’re really friendly people who will be glad to explain things and answer your questions. You can reach my office Monday through Friday, from 8:30 a.m. until 5:00 p.m., at 586-465-1980.