This article about Michigan driver’s license restoration and clearance appeals will examine 2 things that will completely derail a case. Instead of focusing on what it takes to win a driver’s license restoration case, we’ll see at how these issues will cause it to lose. By flipping the usual “here’s what you need” analysis on its head, we’ll clarify what it really takes to succeed in a license appeal. In other words, we’ll get a better idea of what works, by looking at what doesn’t. 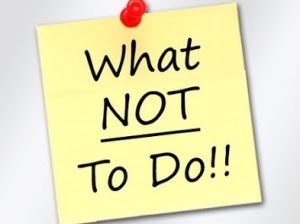 That’s a big deal, but it boils down to this simple proposition: the Michigan Secretary of State has decided that anyone who has had their license revoked for multiple DUI’s will not be allowed to drive again unless they have given up drinking for good. People who don’t drink are zero risk to drive drunk (again), and the line in the sand has been drawn there. The hard truth is that if you drink, or even think you can ever drink again, you’re not going to get your license back.

Underlying all of this is the concept of sobriety. Being “sober” means a person has quit drinking permanently after accepting that it has become a problem. What many people miss is that it is impossible to be “sober,” but still drink once in a while. A person can stop drinking for various lengths of time, but he or she isn’t really sober they admit that their relationship to alcohol has become problematic, accept that they can’t drink anymore, and then quit for good.

Let’s begin with the almost universal reality that everybody “needs” a license. Needing a license, however, is not at all relevant to winning it back, because driving is a privilege, not a right. Under Michigan law, a person who has been convicted of multiple DUI’s and had his or her license revoked forfeited that privilege. At that point, the state is worried about the safety of the public, not “needs” of the repeat offense drunk driver.

Loads of people contact our office and tell us how hard it’s been for them to get by without a license, and how important it is, or will be, for them to be able to drive again. We get that.

None of that matters a bit, though.

When a person who has been revoked for 2 or more DUI’s seeks the the restoration of his or her license, the Michigan Secretary of State is ONLY interested in whether he or she has been alcohol free for a “sufficient” period of time, and whether or not he or she has both the commitment and tools to remain alcohol-free for good.

There is no room in that for negotiation on either the alcohol-free for a sufficient period of time issue, nor the requirement that a person be capable of sticking to a commitment to never drink again. This is an all or nothing, black and white, alcohol-free proposition: a person cannot still drink, no matter how infrequently he or she claims, and still meet the state’s criteria for restoration of driving privileges.

The license appeal process itself is designed to carefully screen out candidates who don’t meet those criteria, and/or either still drink, or even think that they can ever drink again. This means that a lot of people who want their license back don’t really qualify to actually win it back.

Anyone who has consumed alcohol within the last year is NOT a candidate for a license restoration or clearance, and is automatically disqualified.

This goes way beyond just not having picked up a drink, though. The state’s goal is to make sure that it minimizes the risk of ever putting someone back on the road who could drive drunk again. Remember, Michigan’s DUI law categorizes anyone with 2 DUI’s in 7 years, or 3 DUI’s within 10 years as a “habitual alcohol offender” and considers such a person an unacceptable risk to let drive again unless and until they can show they’ve quit drinking for good.

As a consequence, beyond just ruling out a person who still drinks (however little), the Secretary of State will never even consider returning a license to anyone who so much as even thinks he or she can ever drink again. As I pointed out at the outset, people who don’t drink are exactly zero risk to ever drive drunk (again).

This means, then, that only committed non-drinkers will ever be allowed back on the road.

In the real world, there are always people who want to argue that they can be some kind of exception. They’ll want to explain that they don’t drink as much as they used to, or as often, or that they only drink once in a while, or only have the occasional glass of wine with dinner, or only drink while at home, or only when someone else is driving, or any of endless other explanations.

There are no exceptions to the non-drinking requirement.

Either a person has quit drinking and has the ability and commitment to remain completely and totally alcohol-free for the rest of his or her life, or not.

We’ll stop here for now, and resume our discussion in part 2.