Embezzlement charges are scary. Countless of our clients have related how they felt when first contacted by their former employers or the police about missing money, or inventory. They all describe feeling a “pit” in their stomachs, because they knew what was coming. Our firm handles a LOT of embezzlement cases. We know how they work, and how to best resolve them. In this article, we’ll go over some of the more important points of these cases. First, though, we’ll begin with what to do if anyone, including the police, contacts you, and it’s simple: Shut up. 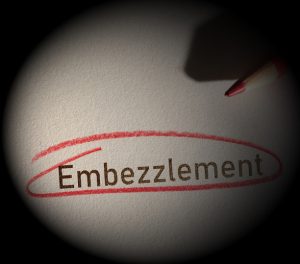 Seriously. No matter what did or did not happen, there is nothing a person can say that’s going to help his or her situation. Unfortunately, people sometimes feel riddled with guilt if they’ve helped themselves to company money, or goods. Then, in a misguided attempt to “set things right,” they make admissions. Even if the evidence in a case is overwhelming, and the facts beyond dispute, just don’t say anything. Even though it’s free, this is priceless legal advice. Moreover, you will never find any competent lawyer who will disagree with it. Ever.

Over the years, my team and I have been called upon by countless people who have been contacted about a potential embezzlement case. We have always advised them to exercise their absolute right to remain silent. As a direct consequence, some of these same people wound up NOT being charged precisely because they DID keep their mouths shut. That’s not to say that such a strategy will work in every case, but even if the evidence is rock-solid, admitting to anything just doesn’t help.

The idea of remaining silent is so critical that it was the subject of the previous article published on this blog. The reader should check it out, because it’s important. Important enough, in fact, to keep repeating. It has been our unfortunate experience that too many people wind up getting sucked into making admissions against themselves. While it may already be too late for many who are reading this, if it isn’t, then do yourself a favor and exercise your right to remain silent. In other words – shut up.

As noted, however, even if a person does remain silent, the evidence against him or her may be strong enough without any admissions on his or her part. Truth be told, that’s were most people charged with embezzlement find themselves. At that point, it becomes critical to have experienced and skilled legal representation. Before the reader thinks this is about to become some sales pitch for our firm (that actually comes at the end), let me continue…

There are two key factors in finding the right lawyer for an embezzlement case (or any kind of criminal case, for that matter):

First, you need a lawyer who is local. This doesn’t have to be some criminal lawyer who’s office is 2 blocks away from the courthouse. It does, however, mean a lawyer who isn’t on the other side of the state. What’s so important about being “local,” in the sense I’m using it here, is that a lawyer REGULARLY gets the court where the case is pending.

For example, our firm’s criminal practice is concentrated in the Greater-Detroit area. For us, that means we ONLY go to the courts in Wayne, Oakland, Macomb, and a few of the surrounding counties (like Lapeer, Livingston, St. Clair and Washtenaw).

Accordingly, if someone in Lansing or Grand Rapids or Traverse City, or in some other state is reading this, we can’t take your case. You, however, can and should take the advice to hire “local.”

Second, you need a lawyer who is directly experienced in your kind of case. Embezzlement charges are, of course, criminal matters. However, the corresponding term, “criminal lawyer” is very general. Our firm is made up of criminal lawyers, but we are as much defined by the kinds of cases we DON’T handle every bit as much as those we do. We do not, for example, handle rape or murder charges.

By contrast, we regularly – and by that, I mean that we very often – handle embezzlement cases. We have extensive experience with them. Anyone looking for representation, including those whose cases are outside of our geographic practice area needs a lawyer who can say the same thing.

Beyond finding a lawyer, there is yet another aspect to embezzlement cases that applies in every situation –

Third, and specifically, it’s about the money. Even if an embezzlement case involves an employee taking merchandise, the charge itself is dependent upon its total value. The employer is going to want to be repaid, whether it’s for $500 worth of merchandise, or $500,000 in diverted funds.

The mechanics of repayment and the time within which it must be done can get complex. However, the bottom line is that the more a person can pay back, and the sooner he or she can do it, the better. Of course, it’s highly unlikely that someone who has converted employer funds for their own use has them sitting in an investment account, earning interest, and can just hand it back.

In the real world, embezzlement cases often take on a life of their own. We’ve seen employees start out intending to “borrow” a few dollars, with the intent to repay it. Other times, a person may only intend to do a little skimming once, or twice, but then things just happen, and the whole thing spirals into something much bigger.

Whatever the backstory, one of the prosecutor’s biggest concerns is making the victim whole. They want the employer repaid, as much and as quickly as possible. In cases involving hundreds of thousands of dollars, any such plan will require more years than the criminal case itself will be active. In those cases, the unpaid amount of money owed (called “restitution”) is converted into a civil judgment, like someone gets when they win a lawsuit.

Restitution is ultimately determined by the court. And that brings us to another important aspect…

Over the years, we’ve seen plenty of cases involving a misbehaving employer who has, to put it nicely, “overreached” on the amount taken. It’s kind of normal, actually, for this to happen. Some employers will, to put it bluntly, inflate their losses. After all, it’s not like they have any sympathy for their former employee. A lawyer with experience in this area knows to go over any and all claimed losses with a fine-tooth comb.

In many cases, my team and I have managed to get restitution requests “trimmed down.” That, however, can only happen when the lawyer and the client put in the time to carefully examine everything. It is simply NEVER acceptable to just take the amount claimed as a loss at face value. Some employers will, quite literally, throw in the “kitchen sink” when it comes to listing what they believe was taken.

Over the span of 30-plus years, we have never had an embezzlement client sent to jail. Despite what the reader may think (or fear), keeping a client out of jail is actually easy, at least for us. Once we have that wrapped up, however, our focus turns to protecting the client’s record and keeping it as clean as possible.

We also want to keep any term of probation as short and as easy as possible. The idea, of course, is to avoid as many of the legal penalties and negative consequences as we can. At least where my team and I practice, nobody can do that better than us.

If you’re facing an embezzlement charge and looking for a lawyer, be a wise consumer. This applies no matter where you live. Read around and see how different lawyers explain these cases, and how they explain their various approaches to them. This blog is a great place to start. It is fully searchable, and updated with 2 new articles every week.

Once you’ve done enough reading, start checking around. You can learn a lot by speaking with a live person.

Now, here’s the sales pitch part: If your case is pending anywhere in the Greater-Detroit area (meaning Wayne, Oakland, Macomb or the surrounding counties), give our office a ring, as well. All of our consultations are free, confidential, and done over the phone, right when you call.