This will be the first installment in a mini-series of 3 relatively short articles intended to protect anyone recently arrested for a DUI from making a mistake that will only make their situation worse. Each article will address one, single topic. In this installment, we’ll examine why you should never act (meaning react to your DUI situation) out of fear. Your decisions about what to do should be intelligent and thoughful. It’s important to begin by pointing out that, most of the time (and almost all of the time in a 1st offense case), a DUI charge isn’t nearly as bad as it might seem, so the first order of the day is to calm down a bit and not simply react. Unfortunately, people become vulnerable when they’re afraid, and fear is a very natural reaction to a DUI charge. What matters is to not let that overwhelm you. 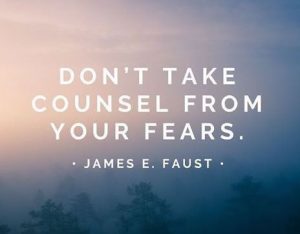 If a person can simply chill out for just a moment and consider a few things before reacting, he or she can make good and thoughtful choices, rather than, as my parents used to say, “jump from the frying pan into the fire.” One of the biggest mistakes people make right after an OWI arrest is to act out of fear. What’s worse is that there is almost an entire segment of the legal industry set up to take advantage of that fear. Moreover, and as I just noted, most, if not all of that fear is misplaced

Let me be clear about this, because it is 100% true in every single criminal and DUI case: you should take your time and exercise good consumer skills before you ever decide on a lawyer. You should look around, read around, and look at those lawyers who actually make the effort answer the questions you have and provide useful information.

Part and parcel of this is that you should run like hell in the other direction from any lawyer or website that uses the trick of asking staged questions to show how much you don’t know. If a site asks something like “Do you know why you should never take the field sobriety tests?” and then doesn’t provide a clear answer, it’s time to move on.

Genuine, competent and confident professionals want to help potential customers by providing real information and then letting them do some comparison shopping. We’re selling important legal services, not disposable ponchos for a rainstorm at the ballgame. Thus, a better DUI lawyer would put out information like “The top 3 reasons why you should not take the field sobriety tests.”

It is natural to be afraid after going through an arrest for an OWI. Normal reactions to a DUI range from disappointment in one’s self to completely freaking out, and everything in-between. Do not let fear guide you into any decision. You want your choices to be well thought out and rational

A good lawyer should be there to help calm your fears, not exploit them.

Fear-based marketing tactics are used by slicksters and swindlers on people who are vulnerable.

If you’re facing a 1st offense DUI, for example, it’s almost certain that you’re not going to jail. This has nothing to do with which lawyer you hire, because there is only one local Judge here in the Metro-Detroit, Tri-County area who even considers jail in a typical 1st offense case.

Therefore, if you run and hire some attorney whose big appeal is that he or she can keep you out of jail, you’ve not only wasted your money, but you’ve given it to the wrong kind of lawyer, because you were never going in the first place.

What you need to do, instead, is slow down and become a good consumer. Read what you can, but then pick up the phone and call.

A lawyer who seems absolutely wonderful online might turn out to be a real stinker when you call. You can learn a lot just by who answers the phone. The person taking your call should be friendly and able to answer your questions. If not, you won’t feel too good about calling into the office when you want to ask something. Not only will you feel like a “bother,” but you’ll always wind up leaving messages and waiting for a callback.

A DUI sucks, but it is not the end of the world. You can and will get through it.

As you look around at lawyers, you’ll see all kinds of marketing strategies aimed to get your business. For example, you’ll now find testimonials just about everywhere. They’re great, but to be perfectly honest about them, we’re now in an age where they have almost become mandatory, so every reasonably up-to-date website has them. Accordingly, they hardly help distinguish one lawyer or firm apart from another, except when compared to those who lack them altogether.

Similarly you’ll find that some websites allow reviews to be posted anonymously, opening the door to a flood of phony positives, and also allowing anyone, including the “competition,” to post unfounded negative reviews, as well. Yet for as suspicious as I might sound about them, even I turn to reviews when I’m shopping, but I always look for markers of authenticity within them.

No matter how you cut it, even the best company is going to piss someone off every now and then, just like the best restaurant is going to get the occasional write up about things like cold soup, small portions, or cranky service. If every independent rating for a business is perfect, then I have to wonder if someone isn’t pulling levers somewhere behind the scenes.

By the same token, however, while I’ll allow for, and even expect, a few negative reviews of anything I’m considering, if too many of them are bad, or have the same criticism, I will usually look elsewhere.

There is plenty to consider as you look for a lawyer, but the larger point is that you need to calm down and take the time and look around enough to actually consider your options. Compare and contrast lawyers. You have to get past all the “doom and gloom” stuff, because almost NONE of it will every happen, anyway.

Did you get that? Almost NONE of the bad things you fear are likely to happen.

Consider this: DUI cases are the bread and butter of the court system’s revenue stream. Do you really think that there is any Judge who wants someone to lose his or her job (and then not be able to collect fines and costs)?

It is a standard condition of all probation orders in Michigan that you either maintain full time employment (or full time student status), or, if you’re not employed, that you active seek full time work.

DUI cases usually never threaten a person’s employment, but if there is something to a case and that becomes an issue, things are almost always worked out so that a person can keep his or her job.

Moreover, when you sit on the Judge’s side of the bench, you can’t help but notice that it’s people with too much time on their hands that tend to get in trouble the most. People who are busy (or, to put it another way, have too many hands on their time) can’t afford to mess around and make the same mistake again.

My intention is not to address each thing you probably fear, because I have already done that in plenty of my other DUI articles. Instead, what I want to make clear here is that if you just take a deep breath and go about this intelligently, taking the time to properly gather information, you’ll learn that you have a lot less to fear in the first place.

That’s not to say a drunk driving case is any kind of picnic, but a good DUI lawyer can spare you all the consequences you really face, so you don’t waste your time worrying about the jail sentence you’re not going to get, or the job you won’t lose…

If you’re facing a DUI charge anywhere in Oakland, Wayne or Macomb County, and are looking to hire a lawyer, do your homework. When you’re ready to ask questions, we’re really friendly people who are ready with answers. All of my consultations are done over the phone, right when you call. We’re open Monday through Friday, from 8:30 a.m. until 5:00 p.m., and can be reached at 586-465-1980. We’re here to help.