This is the third and final installment in our mini-series about the 3 things you should never do after a DUI arrest. To review quickly, in part 1, I cautioned against letting fear guide you. The takeaway in that piece was simply to relax and understand that a DUI case is almost never as bad as it seems. This tied into part 2, where we saw how the goal of most legal marketing is to scare you enough to make you run to the office of the first lawyer you talk to. 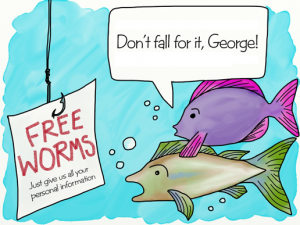 Every lawyer, of course, wants to get that first call, so they use gimmicks like “phones answered 24 hours” to stop people from looking around any further. That, as we noted, is exactly the OPPOSITE of what you should do. Instead, you should always be a good consumer, take your time, look around at all your options, and then make an informed decision. Just as part 1 tied into part 2, part 2 ties in to this third part, because as you do that, you should always play it safe and question everything you hear or read.

Here, in part 3, we’ll see why you should always maintain a healthy skepticism as you look for a lawyer, and reinforce the universal truth that when you come across something that sounds too good to be true, it probably is. When I’m the consumer, I want to do business with those people who provide real information, instead of making everything sound peachy. I want the person who will give me the good, the bad, and the ugly. In the spirit of “treat others as you would wish to be treated,” this is how I do thing.

As a Michigan DUI lawyer who is open for business, it is, of course, in my financial self-interest to bring people in. My approach here is clearly swimming against the current of how other lawyers market themselves, but at the end of the day, I want to be selected by someone who has chosen me from the field of DUI lawyers because of my candor, and because I have distinguished myself from everyone else. What I don’t want to is be hired merely because I was the fastest to call someone back, or the lawyer who painted the rosiest (as opposed to the most honest) picture.

In the spirit of honesty, I go to great lengths to point out that no matter how freaked out you may be over an OWI charge, things will be okay. I am the only lawyer I know who writes about the fact that jail is NOT on the menu in just about every 1st offense case here in the Metro-Detroit area. What I don’t do is make it sound like the only thing that stands between you and having your whole case dismissed is hiring me.

That kind of salesmanship is total BS, but plenty of lawyers make a killing using it.

Lawyer marketing can be, and, unfortunately, is often misleading.

Here is a statistical fact that will make my point like a sledgehammer:

In 2017, there were 36,844 people arrested for DUI offenses (this figure does NOT include Zero Tolerance or MIP charges) in Michigan. Out of all those cases, only 35 people went to trial and won. This means that only .09% (yes, that’s POINT zero nine – less than 1/10th of 1 percent) were found not guilty.

Those are Powerball odds…

Hold on, because it gets worse: Out of all those 36,844 DUI arrests, only 446 cases were thrown out of court by a Judge. These are listed as “merit dismissals,” meaning that a Judge reviewed the evidence and decided to dismiss the case. That amounts to 1.2% of all DUI arrests..

Here’s the thing that gets overlooked in the marketing hype: Judges only dismiss cases when they have to because of problems with the evidence and such. There is no Judge who wants a drunk driver to get off on a technicality.

The police, for their part, don’t regularly screw up DUI arrests, either. If you’ve been charged with a drinking and driving offense, the only way you’re going to get off is if you can prove you were NOT over the legal limit, or, if the evidence against you has been mishandled in some catastrophic way, or is otherwise demonstrably unreliable.

That’s why, when you look for real information about acquittals and dismissals, you find numbers like .09 % and 1.2%, and almost certainly why none of those ”slickster” DUI websites mention them.

As you peruse some lawyers’ websites, though, they try to make it seem like all they ever do is go to court and get DUI cases thrown out.

Because, in truth that doesn’t happen. Nor, for that matter, do fat people get a lean and toned beach body by using the newest fitness gizmo on TV for only 17 minutes a day, 3 times per week. As much as I think these marketing messages are misleading, however, I also believe that people have a personal responsibility to use some common sense.

No matter what, a good DUI lawyer will always carefully review the evidence in each case he or she handles. I do, and so does my team. We know that DUI cases don’t dismiss themselves. We work to produce that kind of outcome. Still, as hard as we work, and as good as we (or anyone else) may be, you can’t find problems with the evidence that aren’t there. No matter how much someone may not “want” a DUI, or how much they “can’t have one,” that has nothing to do with whether the case is solid or not.

The appeal of making the whole thing go away is so strong that people will gladly buy into it, and ignore some rather obvious red flags

It is, understandably, human nature to be drawn to what we want to hear, but it is, likewise, a fools game to overlook the cold truth staring you in the face in favor of what just sounds better.

Fortunes are made on this: Get rich quick, flip houses with no money down; use some fancy cream and get rid of your wrinkles; buy a 6-week diet plan and lose all kinds of weight; or hire this injury lawyer to win more money than anyone else could.

The list goes on and on, but it’s the same ploy used on many DUI sites; take the 1% of exceptional results and make it seem like all the potential customer has to do to is hand over some money to join that club.

If you look carefully, on all those TV ads, there is a quick disclaimer flashed (this is legally required) that says something like “results not typical…”

Honest lawyers work hard to bring about the best results in DUI cases. The statistics I listed above came from the Michigan State Police Annual Drunk Driving Audit.

By law, every DUI arrest must be tracked from the moment of arrest to its conclusion, whatever that is, by the State Police, so it is accurate to every last case. Judges, for their part, have to answer for any and every case that’s dismissed. This means that the entire legal process in DUI cases takes place above-board.

Thus, my team and I look hard at each and every case that come through our office in order to find those several cases that we do get knocked out each year. We produce the very best outcome possible in every case we take, but we don’t try and sell anything other than the truth, and the truth is that most DUI charges aren’t going to be tossed out of court.

It goes without saying that everyone want their case to be the one that gets knocked out, but all that you can do is make sure your lawyer leaves no stone unturned in the quest to determine whether that can or cannot happen.

We do that, in every case we take. We will never do less, but – and this is key – no one can possibly do more, either.

In that way, it becomes a question of integrity. While you look around for a lawyer (and take the time to do it right), look for real information, not the lure of what you want to hear. A DUI is never good news, but it is far from the end of the world. Don’t look to be “saved,” look instead for honest and real help. If you do your homework and become an informed consumer, you’ll do fine.

If you are facing a DUI anywhere in Oakland, Macomb or Wayne County and looking to hire a lawyer, look around, and then check around. All of my consultations are confidential and done over the phone, right when you call. We can be reached Monday through Friday, from 8:30 a.m. until 5:00 p.m., at 586-465-1980. We’re really friendly people who are here to help, and who will be glad to answer your questions and explain things whenever you give us a ring.