This is the 2nd in our mini-series of short, independent articles about the 3 things you should never do after a DUI arrest. In this installment, I’ll explain why you should take your time and never rush to find a lawyer. This is clearly not some self-promotional, “hire me!” piece, because the point I’m making here is that you need to slow down, look around, and examine all of your options in order to find the lawyer who is right to handle your OWI case. 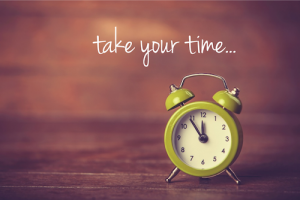 In truth, there is absolutely NO good reason why you shouldn’t be a smart consumer and do your homework before you hire an attorney. You’d do that if you were buying a new car, refrigerator, or TV, so you shouldn’t do any less when it comes to deciding who will represent you. You certainly don’t have to spend a ton of time on this quest, but neither should you run to the first lawyer with whom you speak, either.

A large portion of the DUI legal industry is basically pre-programmed to get potential clients into the office as soon as possible. That’s why you see absolutely idiotic gimmicks like “phones answered 24 hours.” Really? No lawyer out there has his or her phone by the bedside waiting to answer that 3 a.m. call. Instead, it goes to an answering service. Whatever else, the better class of attorneys don’t play the “hook ‘em and book ‘em” game, in large part because they don’t have to.

The operations which use the “phones answered 24 hours” gimmick can seem like a lifesaver to someone desperate and freaking out over a DUI at the moment, but their real mission is to cut short your search for real information and bring you into their office as soon as possible to get you signed up, before you learn why you shouldn’t.

If you’ve been arrested for an OWI, there is no reason to rush to get a lawyer. Evidence will not be lost. In fact, the most time sensitive of all the evidence in a DUI case is the police’s dash-cam video, and that’s always kept for a minimum of 30 days, meaning a lawyer has that long to request that it be preserved.

Over the course of my career, I have been retained the day before a client has had to show up in court countless times. The absolute worst thing that can happen in such a last minute situation is that we have to go to court and get an adjournment so we can take the time to look things over properly.

This happens all the time.

Here, at least, the law is sympathetic, and mandates that your rights be protected. You can’t be convicted of a crime, or wind up worse off, just because you didn’t hire a lawyer right away. In fact, most people who have to use a public defender never even meet him or her until that first court date, and the public defender hasn’t seen any part of the case until that day, either.

In the real world it is commonplace in the court system for people facing some kind of charge to show up with a lawyer they hired the day before, and for that lawyer to need some time to get up to speed. This isn’t rare – it plays out every single day, in every courtroom, everywhere!

Let me make this crystal clear: even if someone was to show up in the courtroom of the least patient Judge in the Metro-Detroit area with a lawyer who didn’t know the first thing about the case because he or she was hired just that morning, the Judge would (and, legally speaking, would have to) grant an adjournment in order for the defense to gather and review the evidence.

Now, unless you’re looking for a lawyer for tomorrow’s court date, you are a million times better off than that, and even if you are, you should still take some time and keep looking anyway!

This bears repeating – there is absolutely NO GOOD REASON why you need to hurry up and find a lawyer for your DUI case right away, or otherwise not take the time to gather useful information so you can pick the person that seems best for you. Being the most available or fastest to call you back should NEVER be a primary consideration.

That said, if you wind up leaving a voicemail during regular business hours and aren’t called back promptly, keep looking around. As much as you should take your time to check out your options, there is no excuse for a lawyer or law firm to not respond promptly.

By taking your time, you can gather, review, and then think about the information you find.

As a Michigan DUI lawyer, it is always my goal to be chosen to represent someone, not “rope” him or her in before they have a chance to look around. And even if I could snatch potentials before they called the competition, I wouldn’t want to be picked as the lawyer for somebody simply because I called them back first.

Instead, I want to be selected because I came out as the best choice to help a person get through his or her DUI. At the end of the day, you want to wind up with the lawyer who proved to be the best for your case, not just the most available or the quickest to get back with you.

For example, if a person is going to have any improvements or repairs done to their home, the usual advice is to get at least 3 estimates. Depending on what you need, you’ll figure who’s best from there. If you’re getting estimates to weed the garden, then the cheapest will probably do just fine. However, if you’re getting a new kitchen or bathroom, then you want the best work, not the cheapest fix.

My advice is to talk to as many lawyers as you can. Of course, I believe in doing consultations over the phone rather than dragging someone in, so be mindful that if you do go to some lawyer’s office, his or her main goal is to get you signed up, and not send you out to do further comparison shopping. Nobody makes any money on free consultations. To profit, those meetings have to be “conversions” where the deal is closed. It’s far easier to do that in person, of course.

Look, my goal is also to ultimately convert phone consultations into retainers. However, because I hate being the target of any kind of hard-sell when I’m the consumer, I know how much I prefer to at least discuss things over the phone, where there is just less “pressure.” Because of that, when we do our consultations, we always tell the caller to check around and feel free to call back, whether with more questions, to compare notes with something another lawyer has said, or to make an appointment.

By now, you should have gotten the idea that you should steer clear of anyone who wants to or would try to limit your ability to shop around for a lawyer. As an old clothing store ad used to say, “an educated consumer is our best customer,” and I honestly believe that.

To summarize, then, in the first part of this 3-part article, we’ve seen that you should never act out of fear as you look for a lawyer and consider your options because things are almost never as bad as you think. In this installment, I’ve tried to make clear that you should slow down and not be in a hurry to find or hire a lawyer. Obviously, these 2 things are pretty well tied together. In the next and final piece, we’ll see how you should always look at all legal marketing with a healthy dose of skepticism, because when it comes to DUI cases, if it sounds too good to be true, it certainly is.

If you have been arrested for a DUI anywhere in Oakland, Macomb or Wayne County, slow down, take your time, and do your homework. Read around, and then check around. All of my consultations are confidential and done over the phone, right when you call. We’re really friendly people who will be glad to answer your questions and explain things. We can be reached Monday through Friday, from 8:30 a.m. until 5:00 p.m., at 586-465-1980. We’re here to help.