In my capacity as a Michigan driver’s license restoration lawyer, I can and do win license appeal cases for people living anywhere in the world. In other words, I handle license restoration cases no matter where in the state a person may reside, and I handle clearance appeals for anyone who no longer resides in Michigan. This can sometimes create a bit of confusion, and is very different from handling DUI and other criminal cases, where I believe it is very important to find a lawyer who is relatively “local” to the court where the charge is pending. In this article, I want to explain the difference and make clear that I file and win license appeals for anyone, no matter where in (or out) of Michigan they may live. The only limitation for me to take someone’s driver’s license restoration case is that they must travel to my location and see me for our first 3-hour face-to-face meeting. And to make matters really convenient, we schedule things so that the client leaves my office and goes directly to my evaluator to have his or her substance use evaluation completed, making it a “one and done” trip. 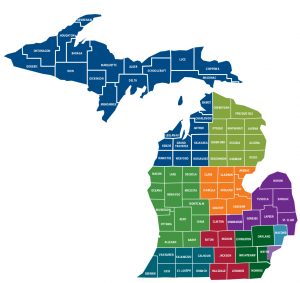 The reason I meet with the client first is to prepare him or her to undergo the evaluation. There is a lot to go over. Certain information must be included in the evaluation, while many other things that seem relevant are best omitted, not because we’re hiding anything from the Secretary of State, but rather because there is limited space on the state’s form. Because they don’t know better, some evaluators will write something like “see attached” when they run out of room. There is no need for that – ever. One of my clients had 13 prior DUI convictions (I won his case the first time, no less), and you can be sure that there was plenty of information in his case, but my evaluator managed to get everything on the state’s form without the need for any kind of addendum. When I meet with the client, I complete a detailed form of my own, called a “substance abuse evaluation checklist,” that lists all the information I know to be important, and which I send with him or her, along with various other documents, to give to the evaluator.

While it doesn’t matter where a person lives in order for me to take his or her case, it is absolutely essential that he or she has genuinely quit drinking. As much detail as I provide on my checklist, the underlying key to it all is the story of why and how a person decided to quit drinking. Nobody quits drinking because it’s working out so well. There is a real human story – your story – behind all the dates and facts. We need to “flesh” that out. Most people have never thought of the journey from drinker to non-drinker as a story. Most of my clients are not in AA, so they don’t have the regular experience of talking around the tables. Even those who do go to meetings often need a little help summarizing everything in a way that it can be translated by the evaluator directly onto the state’s form. That’s where I come in. It’s that story, and not where you live, that matters most.

All of my cases are scheduled for hearing in the Livonia office of the Secretary of State’s Administrative Hearing Section (AHS). The AHS hearing officers are, for all practical purposes, administrative law Judges, having all the same judicial authority as any ALJ. The state classifies them as “administrative law examiners,” probably so it can pay them less. Unlike state court Judges, however, who decide the entire spectrum of legal issues, the hearing officers deal only with driver’s license issues. Whereas state court Judges are all over the map in terms of how they do things, and even when they schedule things, the hearing officers are, and should be, rather uniform in legal approach. Of course, there are some differences between them, any many have their own particular idiosyncrasies or special areas of concern about various aspects of the license appeal process, but it’s still nothing like the court system, where one Judge may begin at 8:00 a.m. and require a defendant to fill out several forms and even write down what happened before taking a plea in a DUI case, while another Judge may start at 9:00 a.m. and not require any such forms.

I point this out because I really believe that, within the context of DUI and criminal cases being handled in court, a client is either paying for a lawyer’s experience to guide him or her in the best way possible, or is paying what amounts to tuition for the lawyer to learn how some Judge does things. In other words, I just don’t see it as anything less than a bad idea to drag some lawyer from far away into a distant court. In my DUI practice, for example, I won’t go beyond the Greater-Detroit area. Obviously, that includes Oakland, Macomb and Wayne Counties, but I will also take cases in Lapeer, Livingston and St. Clair Counties, as well, because they are still part of that larger metro area. Farther beyond, however, is too far for me, and not just to travel, but also to not seem too much like an outsider (who’s taking cases from the local attorneys). I know how things work where I regularly go, so I can sell my experience and can use it to actually help my client get the best outcome.

None of this, however, applies in the world of license appeals, and that’s a good thing. I have license restoration clients from all over Michigan. Still, I get emails from people who live rather far away from my office, have found this blog and like my various driver’s license restoration articles (and my guarantee), and then ask if I know someone near where they live because they don’t think I can help. They are surprised when I explain that I can (and will) take their case, as long as they’re sober. And then they come see me, and, soon enough, get back on the road.

Of course, it doesn’t help clear thing up that within my various DUI and criminal articles on this blog, and in the DUI sections and criminal area of my website, I am rather clear about the geographic limitation of my DUI and criminal practice. Thus, I want to reiterate here that no matter where you live – either in or out of Michigan, – as long as you’ve quit drinking, I can take your driver’s license restoration or clearance appeal case, and guarantee to win it.

If a person still lives in Michigan, then he or she has to start with a restricted license and an ignition interlock unit for at least a year. There is no way around this. Those who live outside of the state don’t win back any kind of Michigan license, but rather what’s called a “clearance” that gets rid of the Michigan hold on his ore her driving record and allows the new state to issue a full and unrestricted license.

It may help to think of winning a license back in the same way one would renew a license in that it doesn’t matter what Secretary of State branch office a person visits; once the business is done, the license is renewed.

If you’ve quit drinking, and no matter where you live, I can get you back on the road. Take the time to read through some of my blog articles; I examine every facet of the license appeal process in detail. Do your homework and read around, then, when you’re ready, check around. All of my consultations are confidential and done over the phone, right when you call. You can reach my office Monday through Friday, from 8:30 a.m. until 5:00 p.m., at 586-465-1980. We’re here to help.