This will be the 4th installment in a series of articles about how you should look for a Michigan DUI lawyer. After acknowledging that a DUI is serious, I was quick to point out that it’s not the end of the world, and no one is going to die because he or she has been charged with Operating While Intoxicated (OWI). Thus, I made clear that the best thing to do is to relax, take a deep breath, read articles like this, learn some basics about what you’re really facing (not the scary-sounding stuff you’ll find on some websites), rate the kinds of legal skills that will be important in the lawyer you want, and then take an honest account of what kind of lawyer you can afford. In this section, we’re going to look at a very important warning – the idea that you should guard against the temptation to pay money just because someone tells you what you want to hear. Instead, you should look for honesty and integrity, and that means listening to what you need to hear. 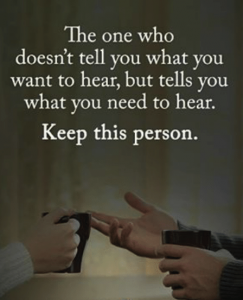 Resist buying into what you want to hear. Despite the value of real knowledge, some people (a lot of people, actually) will gladly fork over money to anyone who paints a rosy picture and tells them what they want to hear, rather than telling them what they need to hear: the truth. Don’t be that person. Of course you want your case dismissed (everybody does), and yes, there are all kinds of things that can impact the evidence against you, but those things that are significant enough to make a Judge throw an entire DUI case out of court always have been and always will be the exception, NOT the rule. You need a lawyer who will examine the evidence against you with a fine-toothed comb, and who will look carefully for anything that can be used to your advantage, but that’s not the same thing as some lawyer making it sound like just about any and every case can be knocked out if you hire him or her.

As much as it may feel good to have someone nod, sympathetically, when you tell them that you just can’t have a DUI on your record, that doesn’t change the fact that the evidence against you is either solid, or not. Does it count that you have made something of yourself and are otherwise a law-abiding, hard-working taxpayer? Absolutely. Will that get you completely out of a DUI, however? No. Your accomplishments and status can certainly help to make sure you get through the case with as few consequences as possible, but that, standing alone, won’t make the who thing go away. At the end of the day, DUI cases stand or fall based upon the evidence, period.

I have to admit, here is where I have to stop and wonder about people, and how some can be so trusting while others have no moral reservations about exploiting that trust. I have sometimes joked about the fact that being honest has probably cost me a lot of money over the course of my career as a Michigan DUI lawyer, but I am content with that. I truly believe there’s some kind of “karma” out there. Let’s turn now, to look at an example so I can illustrate what I mean about exploiting people and selling them what they want to hear, and how that contrasts with the more candid and honest approach of telling them what they need to hear:

Imagine you work for a company that will terminate you if you’re convicted of drunk driving (that almost NEVER happens, but for this example, pretend that’s the case). If you were in that situation, you’d want to be sure you hired the best lawyer you could, and that he or she would leave no stone unturned in the quest to see if there is anything that could be used to get your DUI case thrown out of court. Once you get to the better level of DUI lawyers, though, that degree of integrity and quality of work is just automatic. I look for any and every way to get my client out of a charge, as does every real DUI lawyer. Some operators, though, really play this angle and aim right to a person’s fears and desires in a way that’s downright misleading. Let’s take our example a bit further. Assume that you, the reader (R), are on the phone with Slick Sam (S), the lawyer, and the following exchange takes place:

R: My company checks records at least once a year, and if someone has a DUI they have to be let go. I can’t lose my job over this.

S: I understand. That’s why it’s important that we take the time to look over everything carefully. Do you know how many little things the police can do wrong, or forget, that can cause a DUI to be thrown out of court?

R: Really? Do you think there might be something in my case?

S: Look, there’s always something. No case is perfect [this is also true, but cases aren’t won or lost by being perfect, planes don’t have to take off and land perfectly, and surgery doesn’t need to be perfect, either. These things just need to be good enough], so I just need to look it over to find what’s wrong with it.

R: Do you think I have a good chance of beating this case?

S: Absolutely! I know this much – you don’t have any chance without trying, and whatever is there, I’ll find it and use it to get you out of this jam. What we need to do is get you in so we can talk about this…

[Here’s another hook; the “appointment trick.” I HATE that tactic, don’t use it, and do all of my consultations over the phone. A more truthful exchange with an honest lawyer (H) would go something like this]:

R: My company checks records at least once a year, and if someone has a DUI they have to be let go. I can’t lose my job over this.

H: I understand, and I promise that we’ll carefully go over every shred of the evidence to see if there’s any possible way to beat your case. However – and I’m just being honest here – there may not be. Sure, the police make mistakes in lots of cases, but those kinds of screw ups that cause a case to get completely thrown out of court aren’t the norm, so I don’t want you to have any false hope about this.

R: Can’t you explain my situation to the prosecutor, or the Judge, and tell them I’ve never been in any kind of trouble before, I have a good job, volunteer sometimes at my kid’s school? I mean, jeez, it’s like I step out of line one time and I’m going to lose everything.

H: I will explain those things, because they are important, but legally speaking, the idea that someone “can’t have” a DUI isn’t an excuse that will get him or her out of it. Who you are as a person matters, and we can certainly will use those factors so that the whole case is wrapped up as leniently as possible, but if the evidence against you is solid, the prosecutor isn’t going to dismiss a DUI just because it harms your record.

H: You will get a break. I’m going to make sure you get the best break humanly possible, but if the charge itself is solid, the system doesn’t have a way to make it go away just because it’s bad for a person’s job. Look, if you drive for a living with a CDL (commercial driver’s license) and you get any kind of DUI, your CDL will be suspended for year. There is nothing anyone can do about that, so the fact that some guy who drives a truck for a living will be out of a job isn’t part of the prosecutor’s or the Judge’s calculations. That’s just how it is. You can be a brain surgeon, and a DUI almost certainly will not cause you any trouble for you at work. That’s just the way the ball bounces. The best I can do, and the best any lawyer can ever do, is to make sure to do everything possible in your case, and I promise that I will do that for you.

R. Okay. I understand; thanks.

It’s actually easier to be the slickster, and harder to be the honest lawyer. The slickster’s words are met with a sense of hope and an open wallet. The honest lawyer, who is truthful, may be passed over until the potential client finds that person who tells them what they want to hear. It is, in any setting, much easier to give good news, or at least convey a strong sense of it, than to have to tell someone exactly what they don’t want to hear. Being honest is always better, but it’s not always easy.

This means as you look for a lawyer, you need to look for what you need to hear, not just what you want to hear. This is easier said than done, even for the lawyer. As I noted, it’s much easier to sound hopeful. Not only do people smile as you give them hope, but they can’t wait to give you money, either. It’s not the same if you’re perceived as the bearer of bad news. Yet as easy as it may be to tell people what they like, at least I never have anyone turn to me, disappointed, and say something like, “But you told me…!”

Anyone can take money with a smile and make all kinds of promises. You also want to avoid the opposite and not hire someone who will take your money and tell you how bad things are, either. It’s easy to not deliver if you’ve set someone up to believe there’s nothing to deliver. In other words, you hire a lawyer to make things better. You should always have a clear idea of what a lawyer can, can’t, may and will do for you, beyond giving meaningless reassurances. Amongst the many useless things said by lawyers, few make me roll my eyes more than things like “protect your rights,” “aggressive,” “experienced,” “tough,” “I will fight for you,” or, my all time favorite, “results matter.” Duh.

We’ll stop here, at the mention of useless language, and return, in the next installment, to pick up  right there as we look at 2 more “R’s” you should employ as you look for a lawyer – rejecting the meaningless slogans and remaining skeptical.