You do not need to be in AA to win a Michigan driver’s license restoration or clearance case. My goal in this article is to make clear that AA is NOT required to win a license appeal because we are regularly contacted by people who are clearly under this misconception. They’ll express interest in getting their license back, but then say, in a kind of “aw, shucks” way, that they really are sober, but they don’t go to AA, and wonder if we can still help. Most of them are shocked when we reply that as long as they’ve quit drinking, that’s good enough, and that being in AA (or not) couldn’t matter less. 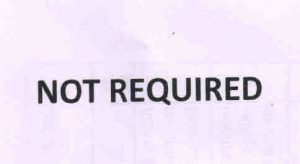 I certainly know what I’m talking about, and I put my money where my mouth is because I guarantee to win every license appeal case I take. The majority of my clients are not in AA. In fact, I’d estimate that around 4 out of 5 of my clients do not go to AA meetings. That said, most of my clients have gone to AA in the past, at least for a little while. Even having attended a few meetings can be very helpful in the context of a license appeal.

Often, when I write about AA, I feel like I’m either attacking it or promoting it. My intention is to do neither here, but instead, make clear that while AA is a great program it’s simply not for everyone. That said, I think it’s also true that many people can learn a lot from AA even if they only spend a short amount of time in it. Most of my clients who did some AA will agree that by the time they stopped going, they had learned some important things, and had picked up what they needed from the program. The reality is that while AA is and should be a long-term or lifetime commitment for some folks, most people manage to stay sober without the need to keep attending support group meetings.

You need to understand that the main issue in a Secretary of State license reinstatement case is that you have the commitment and the tools to remain sober. The state wants to confirm that you have been alcohol free for a certain, minimum period of time (in my office, I generally prefer about 18 months of sobriety) and that you are a safe bet to never drink again. In decades past, being “in” AA was seen as the best way for a person to prove that he or she was a low risk to ever drink again.

That was then; this is now.

Modern research has confirmed that there are many different ways to get sober, and what’s right for you may not work for me. One of the undeniable benefits of AA, however, is that it provides a lot of helpful and important lessons early on in a person’s recovery, when he or she needs them most. Some of AA’s time-tested sayings have really become axioms of recovery, and even people who have never gone to a single AA meeting will learn them, or at least the “gist” of them, through counseling or treatment.

Take, for example, the advice to “avoid wet faces and wet places.” Whether a person learns this saying through AA, or is told by a counselor to stay out of bars and places where drinking is going on, and not to hang out with drinkers and drinking friends, the advice is the same. And it is not only good advice, but a necessary starting point when a person decides to quit drinking. The fact of the matter is that nobody can get and stay sober by hanging out with their old drinking pals. Another old saying puts it this way; “If you hang around the barbershop long enough, you’re going to get a haircut.”

One of, if not THE greatest contribution to the sobriety universe is contained in AA’s first step: “We admitted we were powerless over alcohol and that our lives became unmanageable.” To those unfamiliar with the program, the wording is a bit confusing and strange, but once the meaning is clarified, the underlying idea makes perfect sense: you have reached a point where you cannot pick up a drink anymore without opening yourself up to the real possibility of trouble.

Often, however, the full impact of this idea doesn’t hit quickly enough. Thus, the AA program compliments it with the observation that “I didn’t get in trouble every time I drank, but every time I got in trouble, I had been drinking.” This helps drive the point home.

AA people may express it one way, while non-AA folks another, but the message is clear that there comes a point in your drinking that every time you pick up, it’s like spinning the wheel. You may not go to Hell in a hand-basket every time you drink, but every time you do, you open that door to the possibility of trouble. The only sure way to avoid this is to no longer drink. Once you have to start thinking about controlling, limiting, or in any way managing your drinking, you’re way past the point of having a problem. Normal drinkers never need to think this way.

Some people have to attend AA for a while under court order. Others attend AA voluntarily. Either way, they pick up on these lessons. The reality is that everybody is different, so while some people need to hear them repeated all the time, others will get their meanings in other ways. As a decidedly non-AA saying goes, “different strokes for different folks…”

Being in AA can be helpful to a license appeal, but really only to the extent that a person remembers and applies its lessons. One hearing officer will ask a person who claims to still attend AA to recite various steps (what’s the 4th step? What’s the 7th step?), another will ask what step or steps he or she has worked on recently, or finds important to his or her recovery. This is never a problem for my clients, but these questions quickly screen out anybody trying to BS their way through a hearing.

Although being in AA is not necessary to win your license back, there are some patterns that happen often enough to give rise to expectations about spending some time there. For example, when a person has racked up 4 or 5, or even more DUI’s, he or she will usually have gone to meetings, if only through court order. Thus, while it won’t be expected that such a person is still in AA, anyone with 4 or more DUI’s who has never been to AA may be at a disadvantage, and will have to show that he or she has nevertheless learned some of the key lessons of recovery (like “avoid wet faces and wet places”), if not through the program itself, then perhaps through counseling or treatment.

The key takeaway here is that when it comes to driver’s license restoration and clearance cases, if you have honestly quit drinking, then it doesn’t matter if you’re active in AA, or you went for a while and then stopped, or even if you’ve never been to a meeting in your life. Remember, the focus of the state’s inquiry is that you have stopped drinking and are a safe bet to never drink again. AA is just one way people can learn about and manage to do that.

If you really have quit drinking and need to win restoration of your Michigan driver’s license, or clear a Michigan hold on your driving record so you can get a license in another state, I can make that happen, guaranteed. When I take a license appeal case, you’ll only pay me once to get back on the road. If you’re looking to hire a lawyer, do your homework, read around, and then check around. All of my consultations are free, confidential, and done over the phone, right when you call. We can be reached Monday through Friday, from 8:30 a.m. until 5:00 p.m. (EST) at 586-465-1980. We’re really friendly people, and we’re here to help.