One of the most misleading marketing tactic used by some DUI lawyers is that it’s easy to get a drunk driving charge dismissed. In this article, I want to get to the truth about having a DUI charge thrown out of court. As a teaser, though, let me begin by noting that, in the technical and confusing way most of those DUI legal services are marketed, my office obtains dismissals in the vast majority of the cases we take, so they have nothing on us. In the interests of honesty, however, (something that gets steamrolled over in legal marketing, like fresh asphalt in a new parking lot), that does NOT mean that most DUI cases go away altogether. 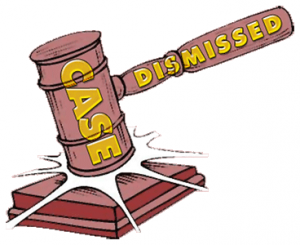 As we set off, I’d ask the reader to think for a moment about all the celebrities who make the headlines for something like a DUI or an assault and battery charge. This is a fairly regular part of the news stream. For the most part, the public is more interested in the fact that So-and-So was arrested for something, rather than following the case as it winds along. Unless someone really well-known goes to prison for years on end for some horrible crime, people tend to have lost interest, when, 4 or 5 months later, So-and-So gets a year probation and 100 hours of community service for a DUI, or punching some photographer.

One thing almost all celebrities have in common is money. None of them is going to wind up with a court-appointed lawyer. When a professional athlete or well-known entertainer gets in a jam, he or she will hire a top-shelf lawyer. People like this don’t go looking for the lawyer who markets him or herself based on having the most affordable fees or having a payment plan. The rich and famous hire the best.

Now, think back to how I mentioned that the public’s interest tends to wane after news of an arrest, because nobody really cares that someone famous is on probation, or has to do community service. What’s missing in that observation?

The notion that famous people hire high-end lawyers and then just “beat” the case. Especially with respect to things like DUI charges, a person can’t just “beat” the case because he or she had money. Sure, hiring a good DUI lawyer is a person’s best bet to get the best results, but no lawyer, no matter how skilled he or she may be, or what they charge, can change the facts; instead, he or she can only work with them.

When is the last time you heard about someone famous getting arrested for a DUI and then getting the whole charge thrown out of court?

The point I’m making here is that even amongst those who basically have no limit to what they can spend fighting a DUI charge, none, that I can ever recall hearing about, had their charges dismissed completely. You’d be hard-pressed to recall a single athlete or celebrity who’s made the news after being arrested for a DUI, only to later hear that he or she went to trial and won the case.

Instead, the follow-up to these stories is always about getting probation and something like community service. Whatever else, these outcomes don’t occur because Mr. or Ms. Rich-and-Famous cheaped-out and hired the wrong lawyer.

How, then, do we reconcile the notion that lawyers claim to get dismissals in the majority of their DUI cases with the reality that not even the rich and famous get out of them completely?

In order to understand why the idea of getting most DUI charges “dismissed” is true, and that it’s also true that most OWI cases don’t just go away completely, you need to understand plea bargains.

The majority of DUI cases are resolved through the negotiation and plea-bargaining process. In Michigan, for example, DUI is technically called OWI, which stands for Operating While Intoxicated. Almost every 1st offense DUI is written up as either OWI or OWI with a BAC of .17 or greater (High BAC). Most of those cases are solid, meaning there is no screw-up by the police that is so bad that it will cause the entire case to be thrown out of court.

The DUI lawyers job, in the cases where the evidence is not going to be tossed out of court, is to find a way to convince the prosecutor to lower the charge, so that a person facing an OWI can get out of that, and plead to a lesser offense – usually what’s called “Impaired Driving,” (OWVI).

In order for someone to take a plea deal to a lesser charge (and this holds true with any and every criminal charge, including a deal to drop a 1st degree murder charge to 2nd degree murder), the original charge has to be dismissed, and in exchange for the dismissal of that charge, the person accepts guilt for the lesser charge.

Thus, EVERY plea bargain requires a dismissal of the original charge. If you’re reading this and thinking something like, “well, that’s bull$hit,” then you’re getting the picture! Let me use a hypothetical:

Imagine you are an investor. You have $1000 to invest, so you put all of it into a fund on January 1.

What if the following 2 months, the fund grows to a new value of $1500. You’ve made money again. Based on the amount with which you began, you’ve now profited by $500 overall, right?

When DUI lawyers say that they get most OWI charges “dismissed,” it’s not much different than our hypothetical investor claiming that he or she earned $1400 in 1 year on a $1000 investment. There’s a sort of technical truth to that, but when you look at the reality of the situation, he or she really only earned $500.

Thus, anyone who gets the benefit of a plea bargain also gets the original charge made against him or her dismissed. But that dismissal hardly ever means that everything – meaning the whole case – just goes away.

When it comes to DUI charges, otherwise intelligent people seem to lose their common sense and hand over their money on the promise that some lawyer can get everything dismissed – the very lawyer that all the rich and famous people seemed to have missed, right?

Too bad the rich and famous didn’t hop on the computer and find that lawyer.

I have no grand takeaway here, other than repeating the age-old advice of “buyer beware.” If you need legal representation, be a smart consumer and learn to read between the lines. Look for real information as you read what lawyers put out. Perhaps more than anything, know that with everything, including lawyers, if it seems too good to be true, it probably is.

If you’re facing a DUI in Wayne, Oakland or Macomb County and are looking for a lawyer, do your homework. Check around, then call around. All of my consultations are confidential, and done over the phone, right when you call. We are really friendly people who will be glad to answer your questions and explain things. You can reach us Monday through Friday, from 8:30 a.m. until 5:00 p.m., at 586-465-1980. We’re here to provide good, honest help.