If you have an ignition interlock in your vehicle, the coronavirus situation has really ramped up the possibility of getting a positive-for-alcohol violation from using hand sanitizer. My office has recently seen an explosion of positive tests because people have used some kind of alcohol-based hand wash too soon before blowing into their interlock unit. This article will focus on a very real and growing problem that’s doesn’t look like it’s going away anytime soon. 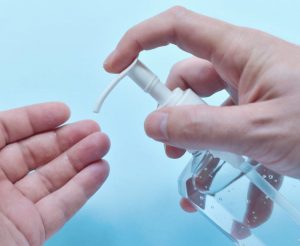 It’s very important to realize that this is a fluid and evolving situation, and things are changing by the day. The Secretary of States’ interlock instructions, written years ago, advise against using ANY kind of hand sanitizer before starting or while operating the vehicle. Now, with the coronavirus situation, people are finding that it’s very hard to go shopping, even with gloves, and then get into their cars without feeling contaminated, so just about everyone is doing some hand-sanitizing before going anywhere.

Unfortunately, some people on the interlock don’t go anywhere at all, because they have a startup failure (this happens when the test result is .25 of higher). A vehicle will start if the positive result is under .25, but it still registers. While I agree that it’s bull$hit if a person gets violated for or otherwise has to explain this later, given the current conditions, as the saying goes, “is what it is.”

My team and I are doing everything we can to help our clients head off a violation, if possible, for this kind of situation. We don’t know yet how this will all play out, because the Michigan Secretary of State (SOS) hasn’t taken action on any of these startup failures thus far. Right now, the state has laid off hundreds of people,, and many SOS employees are doing their best, but working at home.

As a starting point, and to calm some people down, it’s important to understand that a person must have 3 startup failures in a single monitoring period to be formally “violated.” We’ll explore this in more detail later, but the point here is that a single startup failure will NOT cause someone to have his or her license yanked, even though it will have to be explained to a hearing officer at some point, later on.

By contrast, even a single failed rolling retest WILL result in a formal ignition interlock violation. What makes this so bad is that a formal violation violation begins with the Secretary of State revoking the person’s license all over again.

This can be confusing, especially because the term “violation” is misused by everyone, including driver’s license restoration lawyers, like us.

Although we are as guilty as everyone else by slinging it all over the place, we know what we mean by using the term “violation” in different contexts. The same thing goes for the Secretary of State hearing officers who decide these cases.

Unfortunately, most people who don’t work in this field are not so well-versed in these fine distinctions, so let me clarify:

Technically speaking, a violation occurs either when a person fails to comply with the interlock rules, or the Secretary of State takes some action alleging the person has done so. Usually, if a person “violates,” he or she will receive a written notice of the violation from the SOS, and is informed that his or her license has taken away (revoked) again.

The notice also advises that if he or she wishes to contest the violation, they can request a hearing within 14 days.  If a hearing is NOT requested, or if the person requests and attend one, but loses, then his or her license will remain revoked.

One of the biggest sources of confusion is that it’s common to refer to the conduct that can give rise to a violation notice as the violation, but that’s not exactly accurate. If, for example, a person provides a positive breath sample while driving, he or she may not actually have “violated” anything, because there could very well be an innocent explanation for that result, including a malfunction of the machine.

When the Secretary of State is notified of something like a failed or missed test, or a “tamper/circumvent” incident, it processes the information and either issues a formal violation, or not.

If, for example, a person takes the battery our of his or her car, thereby causing a “tamper/circumvent” incident, but can provide the proper information to the Secretary of State in a timely manner (and, to be honest, has some luck), then a formal violation may NOT issue. Thus, the conduct of disconnecting the power is not, by itself, a violation.

The point I’m making is that it’s not necessarily the conduct or incident, but rather what the Secretary of State does about it, that really matters more when we say “violation.”

Once you get that, just know that everyone calls the incident a violation, and the formal violation that follows a “violation,” as well. Confused yet? Hold on…

It may help to think of how we use certain words: back in the day, you had to actually hang up a phone on the receiver to disconnect a call. You technically can’t “hang up” a cell phone; instead, you “end” a call.

Yet everyone says “hang up.”

Let’s add one more violation to the mix: almost everyone calls a formal hearing regarding an interlock violation a “violation,” as well. Thus, If I’m talking to one of my team about what’s on schedule the next day, I will almost certainly say something like, “I have a violation in front of [hearing officer so-and-so],” or “I have [John Doe’s] violation in the morning.”

To be technically correct about it, I should say that, “I have a hearing on an alleged interlock violation,” but because we know what I mean everyone understands

Let’s quickly summarize before we move on: the term violation is used almost interchangeably to mean any of these 3 things:

1. Conduct that does not comport with proper interlock use, or a situation that otherwise gives rise to a failed or missed test, or causes a “tamper/circumvent” incident.

2. An actual violation imposed by the Secretary of State for any of the things imposed in #1, above, that normally will, but does not necessarily result in the revocation of a person’s license, and requires a person to request and attend a formal hearing in order to reinstate or otherwise keep his or her license, and,

3. A formal hearing, requested after a formal notice of an alleged ignition interlock violation, held before a Michigan Secretary of State hearing officer to decide whether to reinstate a license that has been revoked for a “violation,” or otherwise decide if such a revocation should take place.

Here’s why those 3 distinctions matter: if a person goes to start his or her car after using hand sanitizer and has a startup failure, just about everyone will call that a “violation,” even though that conduct isn’t actually a violation. More important, that single incident will NOT, in and of itself, trigger a formal violation. That one incident, on its own, will not cause the person’s license to be revoked again, nor will it trigger any action by the Secretary of State.

Down the road, though, when a person does go in for his or her full license, that startup failure will have to be FULLY explained, and may even be referred to as a “violation.”

Whatever one chooses to call it, alcohol-based sanitizer is now causing problems by way of positive-for-alcohol interlock test result. If that happens at startup less than 3 times in any monitoring period, then it won’t result in the re-revocation of a person’s license.

As I noted, though, each and every positive blow will have to be explained to the hearing officer’s satisfaction when the person shows up, down the road, for a full license.

However – if a person does provide an alcohol-positive breath sample 3 or more times within a single monitoring period, or, if he or she provides a breath sample of .25 or higher while the vehicle is running (this is called a a “failed rolling retest,” even if the car isn’t moving), then a formal violation will follow.

This means that the person’s license will be revoked all over again (technically called a “reinstatement of original action”). The only way he or she can get it back is to request a hearing within 14 days, and then win it. If the person fails to submit a timely request, or, if the evidence presented at his or hearing doesn’t persuade the hearing officer, then the revocation stands.

Under the Secretary of State’s rules, a person must present “clear and convincing” evidence at his or her violation hearing in order to convince the hearing officer that the positive result was not a consequence of consuming beverage alcohol, and that he or she did not otherwise disregard the rules of proper interlock use.

We’ll see how all this goes while everyone is disinfecting with hand-sanitizer to avoid getting COVID-19 . Based only upon my “gut” feeling as a Michigan  driver’s license restoration attorney, I think the Secretary of State is going to become quite good at quickly distinguishing positive breath test results from the use of hand-sanitizer during this pandemic from those where a person had been drinking.

And this leads to the most important part of things:

Anyone who gets a positive result is almost certainly $hit outta luck for getting a PBT (breath) test (the police, understandably, aren’t doing them right now) but should be relentless in getting an EtG test ASAP. It’s best to have the EtG test done right away, but to be clear, a urine sample provided within 12 hours is still better than one done later. After 24 hours, however, you might as well not even bother.

Also, the single WORST thing a person can do after a startup failure is to NOT stay with the vehicle. If it won’t start, STAY IN THE VEHICLE SO THE CAMERA GETS YOUR PICTURE while you keep trying, even if there is a lockout, until it does start, because at least you can prove that the alcohol evaporated in a few minutes. That’s consistent with the use of a hand-sanitizer, but not the beverage consumption of alcohol.

Remember, the burden is on YOU to prove your case, even when you’re violated.

As I write this, we’re in the midst of a pandemic, and things are a bit crazy. It’s a given that most readers will be here because of a problem. Do everything you can to be able to show that the positive result dissipated quickly; this means staying with (or going back to) the vehicle and continuing to blow until your results are clean, and then getting an EtG test.

Make SURE you do get a timely EtG test. If everyplace is closed now, go first thing tomorrow. If you’re a client of ours, drop us a line (we typically monitor emails 7 days a week and usually until very late) and we’ll get right back with you.

Whatever else, if you’re facing an ignition interlock violation, do your homework as you look for a lawyer. Read around, and see how lawyers explain things, and how they explain themselves. When you’ve done enough of that, start checking around.