As Michigan DUI lawyers, my team and I consider ourselves to be rather good at what we do. I have no doubt that in every DUI case we handle, we manage to bring about the very best result possible. We have more than enough experience and skill to do just that, but there is also a 3rd element to being a good DUI attorney that often gets overlooked: a strong conscience. When we accept a retainer from someone, we feel a moral obligation to do everything possible to make sure we produce the best outcome for him or her. 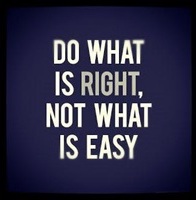 For everything I can and will say on this subject, it really comes back to the simple principle of treating others as you would wish to be treated. There are certain times in life when you have no choice but to put your trust and well-being into someone else’s hands, and when that happens, you can only hope that person will put his or her heart and soul into the job and look out for you like they’d look out for their own family. We always feel that responsibility when someone puts their trust in us, and we absolutely pour our hearts and souls into the work we do.

If there’s a point to be made here, it’s that all 3 of these ingredients – experience, integrity, and skill – must be present for a lawyer to really be “good.” Who wants a really smart, sharp lawyer that can’t be trusted? On the flip side, what good is the most honest attorney on the planet, if he or she isn’t sharp? In certain fields, like law and medicine, brighter is better, but raw intelligence always needs to be guided by a strong moral compass, as well. This goes a lot deeper than merely not being a crook, and extends to making sure to look out for interests that people don’t even know they have.

It’s a crude example, but it makes the point: imagine that a person is wheeled into the emergency room after a car accident with a huge gash on their forehead, and it’s bleeding profusely. That night, there are 2 physicians on duty: both are good, and skilled, but one is sort of a distracted, hurry-up person who can’t wait to get done with a case, while the other is very conscientious and meticulous, taking the time to close every wound with the skill and attention of a plastic surgeon.

Who would you rather have?

Let’s change that up a bit, and imagine that although the second doctor is very kind, and tries real hard, he just doesn’t have the talent to close wounds without leaving a big scar.

The point is that while skill and experience are necessary, so is a guiding conscience to use those abilities to their fullest.

Of course, if that patient has seen a gaping hole in his or her head, they’re probably freaked out and just want to be “saved.” They don’t want to die, so considerations of what the scar will look like 2 and 3 years down the road aren’t probably the first thing on their mind.

However, once the doctor knows he has the patient’s survival in hand, then thinking about how the wound will heal, and how it will look in a few years should be a top priority for him or her.

This is directly relevant to the way my team and I handle OWI cases, and it’s something that should be talked about up front, and not simply assumed. Let me explain:

We deal with DUI cases every day. It’s very common for people to call us and be all upset and worried. Without a doubt, the biggest fear most people have is going to jail, and one of the first questions they ask is something like “am I going to go to jail?”, or, “can you keep me out of jail?”

As I often point out, at least here in the Metro-Detroit area (meaning Wayne, Oakland, Macomb and the surrounding counties), a 1st offender is almost certainly NOT going to jail. Of course, a lot of people don’t read that far, so when we explain that to them, they quite literally let out a huge sigh of relief.

For some people, that’s enough; if they know they’re not going to jail, they’re content.

However, there are loads of other considerations beyond staying out of jail that will affect a person in the future. As DUI lawyers, we know that the charge that ultimately goes on a person’s record will affect what happens to his or her driver’s license, and has other important ramifications, as well.

Thus, we are always conscious of the fact that when we handle a case, everything we do (and don’t do) can and will have a direct and lasting impact on our client’s life, and can include things he or she doesn’t know or otherwise has even thought about.

For us, when some stressed-out person calls us up and makes clear that his or her primary fear is going to jail, and we tell him or her that we’ve got that covered, and they tell us how happy they are to hear that, we’d consider it downright immoral to not do our best to produce the best outcome possible, even as it relates to things the person may not (and may not ever) be aware of.

Does a person’s current lack of foresight about the long-term potential consequences of a DUI conviction make it okay for us to do nothing more than just keep him or her out of jail? It seems like the minimum ethical thing a lawyer can do is to protect all of the client’s interests, whether the client realizes them or not.

Remember, every one of us is have to going to put our well-being into someone else’s hands at some point or points in our lives. Here again, we come back to the golden rule: Treat others as you would wish to be treated.

What if there is something my team and I can do with a little extra effort that will save the client some money that he or she would not otherwise know about? Do we just forget about it, figuring that by keeping him or her out of jail, we’ve provided what they want, so why do the extra work, especially when there’s no real expectation that we’ll do more?

When a person puts their trust in a professional, like a CPA, doctor, or lawyer, to handle a situation, he or she should EXPECT that professional to look out for every interest the person has, or could have, and not just those that the client or patient knows about.

Let’s go back to our emergency room forehead gash hypothetical: if the patient (we’ll say “he” in this case) was brought in and, although bleeding profusely, was very alert, and told the attending physician that his main concern was being able to attend his daughter’s wedding in a week so he could walk her down the aisle.

If the doctor knew that wouldn’t be a problem, would it then be okay for her to just stitch up the patient’s head any old way, and not try to minimize his scarring to the best of her ability?

What if that doctor knew that she could do something that, although it would take twice as long, would make the scar almost invisible?

Years ago, my wife had a skin cancer surgery (MOHS) performed on her forehead by a very skilled surgeon. The procedure was done outpatient, and my wife was told that she could either have the doctor doing the MOHS surgery close the wound, or she could have an outside plastic surgeon do it.

When we asked the staff for their honest opinion, they told us that their doctor was exceptionally talented AND conscientious.

We elected to have him close the wound, and I got to be in the room when he did it.

This wonderful doctor was a true artist, but beyond the nearly undetectable scar that you can’t find with a magnifying glass, it was the time he took to accomplish that result that mattered. I am certain that if my wife handed a million dollars to the best plastic surgeon on the planet, she could NOT have gotten a better result.

My wife’s doctor didn’t charge extra for closing her up and leaving what amounts to NO scar, but he could have very easily just done a “good enough” job on her, rather than the excellent job he did, and we would have been none the wiser.

He did that excellent job because he was conscientious. In that way, he had, and used, the proper combination of experience, integrity and skill.

Unfortunately, there is no real way to really know if any professional you hire for any job will do this.

Of course, if you ask, they’ll say they will; who wouldn’t?

However, a person is either naturally predisposed to be this way or not. And to be clear, I’m not suggesting that there is any shortage of this “do the right thing” inclination among DUI lawyers, or any group, for that matter.

My point is simply that being a really good lawyer (or CPA or dentist or doctor or whatever) requires, in addition to experience and skill, a strong conscience, as well

It might make sense, though, to question whether someone who speaks in an unkind manner, or who is otherwise unhelpful has this requisite degree of conscience.

To be perfectly candid (and perhaps a little less than diplomatic) remember, your lawyer is your spokesperson, so anyone with the physical presentation of a slob who needs a haircut, a shave, or a makeover, or who otherwise mumbles, or talks like they have a mouth full of marbles, or who, uh can’t get through a sentence without, uh, saying, uh all the time is, uh, probably not a good choice…

At the end of the day, success in a DUI case is always best measure by what does NOT happen to you.

Look for experience and skill AND a strong conscience. The best way to do that is to read around, and see how lawyers explain things like the criminal and DUI legal process, and how they explain their approach to it. If you’re looking for a lawyer, be a good consumer and, one you’ve read around enough, then check around. You can learn a lot by just talking to a lawyer or with someone at a law firm.