In my role as a Michigan driver’s license restoration lawyer, I encounter a lot of misunderstandings about the license appeal process. Ann, my senior assistant, suggested this article after speaking with a caller, who, like many, had incorrectly heard that you have to lose your first appeal before you can win your license back. Many people will then wonder, “why bother?” Not only is this notion TOTALLY WRONG, but it also flies in the face of the reality that the law itself provides for a second chance. I know what I’m talking about, because I guarantee to win every license case I take. I earn my income by succeeding the first time around, not having to do everything all over again, for free. 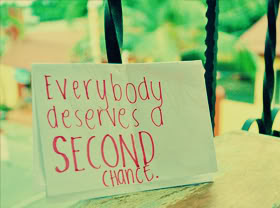 License appeals are hard, and they’re designed to be that way, but not just for punishment’s sake; the Michigan Secretary of State (SOS) wants to make sure that nobody can get back behind the wheel (at least legally) as long as he or she presents any risk to the public. The SOS has drawn the line in the sand, and will only reinstate a license for someone who can prove he or she has quit drinking for good and is a safe bet to never drink again. To the state, the very idea that someone might ever drink again makes him or her too much of a risk to drink and drive again, and therefore NOT a candidate for a license reinstatement. Of course, the people who have the lowest risk to drink and drive again are those who don’t drink at all, and they’re the ones who will get a second chance.

The idea of a second chance goes back to ancient and biblical times, and is wrapped up in larger, western idea of fairness. It has always been a part of American law. Sure, there are some people, like serial killers and such, who are so dangerous that we make no provision for them to walk amongst the rest of us. For everyone else, the legal system is set up so that a person receives his or her punishment and is then given another chance. This is equally true in the world of driver’s license restoration and clearance cases for people who’ve had their license revoked for multiple DUI’s, as long as they can prove themselves a safe bet to never drink again.

After a minimum period of revocation (1 year for 2 DUI’s within 7 years, and 5 years for 3 DUI’s within 10 years), a person becomes legally eligible to file for reinstatement of his or her license. The law is written that way because it is understood that everybody deserves a second chance. The Secretary of State, however, wants 2 things to happen before it will put somebody back on the road: first, it is hoped that the inconvenience of not having a license has hurt enough to make the point that driving drunk is not acceptable, and second, that the person realizes his or her relationship to alcohol has become a problem, and will quit drinking for good.

The key here, and the key to the whole process, really, is that the person has in fact, quit drinking for good. The minimum period of revocation will pass no matter what a person does, so even if he or she continues to drink, the 1 or 5 years will come and go soon enough. When you think about the concept of giving someone a second chance, it only makes sense that he or she has appropriate remorse for whatever has been done, and has also changed whatever needed to be changed to make sure it doesn’t happen again.

In the context of license appeals, the state will NEVER consider a case where a person so much as thinks he or she can ever consume alcohol again. In other words, an argument like “I only have a beer (or glass of wine, or whatever) once in a while,” or “I only drink at home” won’t fly. The state’s rules provide you with one simple choice: either you can drink, or you can drive. You cannot win your license back if you are even slightly open to the possibility of ever consuming alcohol again.

In the real world, once a person does become and has otherwise made the commitment to remain alcohol free, everything in his or her life changes, and that includes the ability to win a driver’s license restoration or clearance case the first time around. Whenever I talk or write about my guarantee, the focus is on me. Here, what I want to make clear is that my role is like the conductor of an orchestra, and is limited by what he or she has to work with. In that sense, being able to win your license back the first time you try means that the focus is really on you, and that’s certainly where the Secretary of State is going to look.

It matters how you think of a second chance, and what you do with it. Here, we can see the stark contrast between those who still drink and those who get sober. The people who still drink haven’t really changed their thinking at all, and thus, their lives aren’t much different, either. Sure, they may kid themselves that they’ll be better, or that they’ll somehow limit or manage how much or how often they drink, but that’s exactly what they told themselves after their 1st DUI, and, if they have more than 2, after each and every one that came before. Nothing changes until something changes…

When people say they’ve heard you can’t win the first time, who do you think they’re getting that information from? It’s obviously not from anyone who did win his or her case the first time around. The fact of the matter is that the person passing along that misinformation is wrong, and doesn’t know it. Such a person has either not tried a license appeal, and is therefore talking out of his or her a$$, or has tried one, done it all wrong, and then lost, to no great surprise.

And if that person is someone who still drinks, or even thinks he or she can still drink after racking up multiple DUI’s, then you know they haven’t changed their thinking. I don’t mean this to sound as harsh as it probably will, but why would you ever listen to a proven loser? You have to change your way of thinking to change your life, and this applies to everything.

Sober people come to know, if only in retrospect, that the moment you even have to THINK about managing your drinking, you’ve got a problem. Normal drinkers never have to think that way. On top of that, trying to control or limit your drinking never works, anyway. Once the idea of limiting your drinking becomes an issue, the only workable solution is to quit. Before I get too carried away on this, let’s circle back to the state’s position, because that’s where the decision to grant or deny a license appeal comes from.

If a person is still thinking the way he or she did when their license was revoked, then nothing has changed. However, when a person does genuinely become sober, just about every aspect of his or her life changes. This includes who they hang out with, what they do for fun, and even how they think. When this is proven to the Secretary of State (assuming a sufficient period of sobriety has been established), then a license appeal will be granted.

That’s were I come in. One of the curious realities here is that for as many people who don’t reach out to me early on because they’re afraid to be denied, we hear from plenty who feel they deserve a license just because they “need” one, and haven’t even thought about quitting drinking.

Everyone deserves a second chance, but they have to earn it in some way. For things like an offensive word spoken to another person, an apology that shows genuine remorse is usually enough. For serious crimes, there is a debt that has to be paid to society. In the world of DUI’s and license restorations, a person “earns” his or her second chance by realizing that his or her relationship to alcohol is too fraught with risk to continue drinking, making the decision to quit, and following that up with the kind of life changes that reinforce his or her commitment to lifelong sobriety. When this happens, you can win your license back, whether it’s your first time trying or not.

If you’re looking to hire a lawyer to win your Michigan driver’s license restoration or clearance case, do your homework. Read around, then check around and ask questions. If I take your case, I’ll win it, guaranteed. All of my consultations are done over the phone, right when you call. We’re really friendly people who will be glad to answer your questions and explain things. You can reach my office Monday through Friday, from 8:30 a.m. until 5:00 p.m. (EST), at 586-465-1980. We’re here to help.