As Michigan criminal and DUI lawyers, we spend a lot of time in court. Or at least we used to: that changed with the Coronavirus, and courts have been largely shut down since. As of this writing, Michigan courts are adapting their way to being able to handle regular criminal matters again. In the weeks following the state’s shutdown, only “emergency” matters, meaning things like arraignments, bond (bail) issues, and certain probation violation matters, were being heard. That’s about to change. 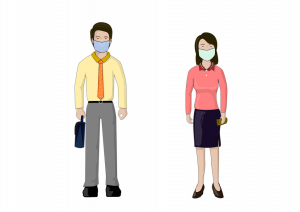 We really don’t know when things will fully get back to normal, or, for that matter, what that new “normal” will look like. We do know, however, that the way cases are handled is going to be different after this, both in the long and short-term. Even walking into court is going to give some people pause as soon as they approach a door handle and have to touch it, or, once inside, have to use a “public” pen to sign a document.

As lawyers who do a lot of our work in courtrooms, a regular part of our jobs involves turning and whispering instructions or otherwise explaining things to our clients, while standing before a Judge. How is that going to play out when cases are heard live again? Of course, the bigger question is, when will cases ever be heard live again? The immediate plan is to use as videoconferencing as possible, but may very well lead to some permanent changes, as well.

Social distancing will be necessary and will be used in the courts for some time after things start back up. The larger issue that looms, though, is when will the courts reopen to the public?

As I hinted above, it seems rather likely that the use of video, to some extent, will inevitably become part of the fabric of how things are done in criminal, driver’s license restoration and DUI cases from now on.

There will no doubt be some kind of trial and error period as everyone figures out how to best balance live court hearings, which are necessary in at least certain DUI and criminal cases, with the use of video. As with all things in real life, lessons will be learned by getting things wrong, and finding what’s better. This is a nice way of saying it might be something of a bumpy ride for a while.

This also holds true for office appointments. When someone charged with a criminal offense, like Indecent Exposure, or wants to move forward with a driver’s license restoration appeal, there will come a point when he or she will need or at least want to “meet” the lawyer they’ve hired. How much of that will be done by video.

Are in-person office appointments going to become a thing of the past? The post-coronavirus truth is that most people are going to be hesitant to walk into a law office and sit in a small lobby, or across a table, about 2 feet apart from some lawyer, and start talking about their case.

Likewise, most lawyers are going to be just as reticent to be on the other side of that table from anyone.

How are we going to do this? No matter what anyone thinks now, we are quickly approaching the time when we have to stop talking about it and actually start doing something. Criminal, OWI and driver’s license restoration cases can’t be put off forever. [UPDATE 5/11/2020: We have been informed by the Michigan Secretary of State that they will ONLY do video hearings from now on, and those will continue indefinitely].

For my part, I don’t know if we will ever entirely move away from “in-person” appointments. Video may be necessary now, and may be a convenient substitute for some kinds of meetings in the future, but can it ever fully replace face-to-face communications.?

Is it possible that we’ll grow so accustomed to doing “virtual” meetings that face-to-face will be become obsolete?

This is all a big deal for driver’s license restoration cases before the Michigan Secretary of State. Until now, my practice has prided itself on only conducting live, in-person hearings, but with those looking unlikely to resume any time in the foreseeable future, we’re going to have to adapt. Beyond our office, though, there are loads of people who have been waiting to get their license back, and they can’t be put off forever, either.

When this outbreak started, I saw an interview with the Lt. General Russell Honore, who led the military response to the Hurricane Katrina disaster in which he predicted that there would be a major shift in the way we do business in this country, and a whole new “normal.”

Specifically, he noted that while everyone was learning how to work remotely, and as people got better at it, lots of employers who rented large offices with dozens or even hundreds of cubicles would start to wonder why they’re paying to rent all that space, have all these people drive in, park their cars, and then sit next to each other to do the very same thing they are able to do just as well at home.

He said, and I think he’s right, that there is going to be a dramatic drop in the need for office space, and a corresponding increase in the amount of done remotely.

No matter what happens and when, there is going to be a permanent change in the way the world does business and the way we interact with each other. Nobody can predict how that will ultimately shake out, and things will no doubt evolve over time, but make no mistake, things will never be as they once were.

This will apply every bit as much to criminal and DUI cases as it will to getting a haircut or eating at a restaurant.

Dr. Anthony Fauci, a name known to everyone right now, has said that we should stop shaking hands altogether. I consider his pronouncement as much permission as advice, because as I sit here now, I can’t imagine ever wanting to shake hands again.

In that same way, I can only wonder when I’ll feel comfortable being physically close to strangers, as long as there is any risk of the Coronavirus still being transmitted. I know that many people feel the same way.

Right now, with bars closed and not concerts or sporting events taking place, DUI cases are way down. I can only imagine the dread a police officer would feel even thinking about administering a breath test.

Not surprisingly, other criminal offenses, like domestic violence and sex crimes have risen. Overall, though, arrests are down, and the court system is processing less criminal cases than usual.

That’s now, but what about when things begin to reopen?

Will the pent-up energy and frustration cause a spike in things like DUI and indecent exposure cases? It seems reasonable that lots of people who have been stuck at home will take advantage of being able to go out and do things again, and some of them may not let the fact that they have a suspended license, or a revoked license, hold them back.

Obviously, then, what matters most, particularly in the context of criminal and DUI cases, is what the courts are going to do, and, as I’ve made clear, they’ll have to do something.

There is a “commission” of sorts of Judges looking into this and trying to figure it out.

Hopefully, someone will have the sense to make things (meaning the court processes) uniform, but I won’t hold my breath. Historically, courts are rather independent (for example, some courts start at 8:00 a.m., some at 8:30 a.m., while others begin at 9:00 a.m.), and currently, each court has set its own rules for handling cases during the Coronavirus pandemic.

Of course, the problem is that, even if there is a general consensus about how to handle cases, there will probably be at least one court that won’t follow suit and will make things harder than they need to be. While the majority of courts will probably all be on the same page, there’s always an exception or two. That’s life, though…

Moreover, while it’s likely that some kind of video conferencing can and will be used in all courts, at least to some extent, from now on, it’s also likely that there will NOT be a single uniform platform or program used across the board by all of them. In other words, as lawyers, we’ll probably have to use several different video conferencing programs, rather than just one, or even two.

My team and I will manage just fine by doing what we’ve always done; figuring it out. For all of my 30 years as a lawyer, almost every court has had its own way of filing and scheduling ad conducting matters, so it became second nature to learn how to navigate my way through this.

This isn’t limited to just lawyers, though. Having a handle on and being able to efficiently manage these differences has long been one of the best attributes of an experienced legal assistant. We’re lucky to have a great staff, headed by a senior assistant/office manager who keeps things running as smoothly as possible. Her job just got complicated, though…

As much as I wish it would happen, there is no reason to think that any of this lack of consistency will change now. However, I do hope that those in charge can recognize this as a good opportunity to bring a little cohesiveness to the local, Metro-Detroit legal system.

Whatever else, the reader can be sure that the future of court proceedings will involve some kind of social distancing measures, including the use of video.

As lawyers, our first concern is, of course, to protect our client’s interests. While it’s a cliche that lawyers will always find a loophole in something, you can be sure that we’ll employ that same “craftiness” to make sure that, however the courts decide to do things, we’ll have the ability to be able to communicate with our clients and make sure we can produce the best results possible.

No matter what else is going on, at the end of the day, success in a criminal or DUI case is always best measured by what does NOT happen to you.

In driver’s license restoration cases, success equals winning, and our office will continue to guarantee to win every first time restoration and clearance case we take, even if we have to do our hearings by video.

There will be a period of flux as all of this plays out. How long it lasts depends upon a lot of factors, but there will come a time when everyone becomes comfortable with how things are done. Even then, things will continue to change as society, in general, and the court system, in particular, can safely move away from social distancing and back to way we’ve always interacted.

In the meantime, stay tuned…

If you are looking to hire a lawyer, do your homework. Read around. While this article is a bit off-topic for me, I have published well over 1000 detailed and informative articles to date that examine every aspect of criminal, driver’s license restoration and DUI cases. Read around, and see how lawyers explain things, and how they explain themselves. When you’ve done enough of that, then start checking around.

All of our consultations are free, confidential, and HAVE ALWAYS BEEN DONE OVER THE PHONE, RIGHT WHEN YOU CALL. That’s all the better now. My team and I are very friendly people who will be glad to answer your questions and explain things.