In part 1 of this article, I began addressing the question, “Do I need a lawyer for this?” The simple answer for anyone facing a misdemeanor or felony case is “yes.” We left off with a list of questions to make the point that a competent criminal attorney could answer every last one of them without a second thought. By contrast, a civil lawyer, even if he or she could answer some, would be handicapped in handling a criminal or DUI case. A layperson isn’t even in the ballpark. 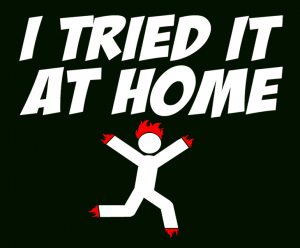 We’ll resume our discussion, here in part 2, right from that point – it is just plain dumb to try and handle your own case if it’s anything more than a simple traffic ticket (and even then, a sharp lawyer can usually work out a break that would otherwise be completely unavailable to an unrepresented person). Now, before anyone thinks, “Of course you’re going to say hire a lawyer, because that’s how you make your money!” let me make 2 very important points:

First – yes, you’re right! We’re a law firm for hire; we can’t keep the doors open doing “free legal.” We help out when and where we can, but our payroll isn’t met by NOT getting hired. We make our living handling criminal, driver’s license restoration cases for people. We’re in business to make money. Of course, we’ll help out as much as we can, but even a free legal aid clinic has employees to pay and obligation to cover.

Second – people who want to try the “do-it-yourself” approach generally do not understand the whole legal process, let alone all the potential consequences that can stem from a conviction.

It can also be a money issue, most people go the “do-it-yourself” route to save money, and that’s fine with some things. Personally, I hate valet parking; I can take care of my own car. However, there are some areas where the amount of money you might be able to save is far outweighed by other potential costs, and a criminal or DUI case is one of them. And to be clear, I understand that not everyone has the means to hire their own lawyer, but if you can’t afford a lawyer, then get a public defender.

If a person winds up with a more serious conviction on his or her criminal or driving record that affects his or her employment, or somehow winds up with what would have been an otherwise avoidable driver’s license suspension, they’ll wish they’d have had a lawyer.

Remember, there is tried and true wisdom behind the old saying that “A little knowledge is a dangerous thing.”

You will never see a celebrity or any person of means handle his or her own criminal or DUI case. When people need to have the best results possible, then they need the best lawyer they can afford. Anyone who seriously considers representing themselves clearly has a different set of priorities. I have, in the course of my career, represented numerous lawyers.

It’s one thing to try and put in a furnace and find out you screwed something up, and then call in the professional later to fix what you didn’t get right. It’s an entirely different thing, however, when, years after having represented yourself in a criminal or DUI case, you find that there is something on your record, or some limitation on your ability to drive, or some other thing that could have been avoided had your case been handled differently.

You can’t go back and undo those mistakes.

Of course, there are some people for whom the impact to their criminal and/or driving record won’t ever matter in their lives. A person on disability never has to worry about a potential employer doing a background check. If doing it yourself and saving a few bucks is your first priority, then you probably don’t have to worry about your record, suffering through “probation from Hell,” or losing very much.

Even then, however, I’d strongly advise someone who can’t afford their own lawyer to take court-appointed, because a lawyer can still help avoid lots of things a non-lawyer won’t even know about, at least until it’s too late.

It’s not uncommon for a defendant, standing before a Judge to be sentenced, to say something like he or she can’t go to jail because they have to support the family. Most Judges won’t react very strongly, if at all, to that kind of statement. However, I remember a now-retired circuit court Judge who would become very impatient if anything like that was said to her, and who would very strongly reply something like, “Don’t you try and put that on me! If taking care of your family was so important, then you should have thought of that before you [broke whatever law]!”

As a lawyer, I always made sure my clients never said anything like that to her. Whatever else, when it comes to legal services, you’ll never get what you don’t pay for.

For anyone considering a driver’s license restoration or clearance appeal, I have to circle back to another observation of our ever-wise senior assistant, Ann; she answers anyone who asks if they need a lawyer for this kind of case that, while they don’t, “if you do it yourself, there’s no guarantee that you’ll win. If we take your case, then you get a guarantee” Remember, my office guarantees to win every initial driver’s license restoration and clearance appeal case we accept.

It’s different, however, in a criminal case or DUI case; as I just noted, if you lose a license appeal, you can try again in a year. If you screw up a criminal or DUI case, you’re stuck with the results forever. For most people, avoiding as much of the fallout as possible from a criminal or DUI case will make a huge difference in their lives. This is especially true for anyone who may be subject to any kind of background check.

There is an irony to all of this, because the kinds of clients we typically represent in criminal and DUI cases are almost always those who don’t harbor any ill-advised idea to try and represent themselves. Instead, they’re people looking for the right lawyer to make sure they get the best results possible.

Just 2 days before this article was written, I was speaking with a CPA colleague of mine about hiring me to handle his brother-in-law’s case. As I drilled down into the brother-in-law’s long prior record, I was honest with my colleague. I told him that, given the particular circumstances in his brother- in-law’s case and where it was pending, combined with a terrible record, the potential outcome from hiring a lawyer like me, versus saving the money and just going with a court-appointed lawyer, was unlikely to be significantly different.

In other words, instead of grabbing my colleague’s money, that was right there for the taking (and he has plenty of it), I was honest, and treated him the same way I’d want to be treated if I found myself having to deal with a situation that would be best handled by a professional. Whatever else, though, it was never contemplated that the brother-in-law would NOT have a lawyer.

The point of the story is that, as honest lawyers, if someone calls our office, ready to pay money and hire us, we’re not going to take a case unless it’s the right thing to do. Beyond the standard of just treating someone the way I’d want to be treated, I always try to imagine my own child reaching out to some stranger for help, and if that happened, I’d certainly hope that whoever she called would have a strong conscience and advise her honestly and properly.

We always do just that in our office.

If you are facing a criminal or DUI charge, or need to win back your driver’s license and are looking to hire a lawyer, do your homework. Read around. See how lawyers explain the issues relevant to your situation, and then how they explain themselves. When you’ve narrowed the field, start checking around. All of my prices are listed on this blog and on my site. I’d advise caution when dealing with anyone who is secretive about price, and wants you to “come in first.”

All of our consultations are free, confidential, and done over the phone, right when you call. We are very friendly people who will be glad to answer your questions and explain things. You can reach us Monday through Friday, from 8: 30 a.m. until 5:00 p.m. (EST), at 586-465-1980.