If you have lost your Michigan driver’s license because of multiple DUI’s, it goes without saying that you wish you could have it back. It’s hard to get by without driving. As one of the Michigan Secretary of State’s Administrative Hearing Section (AHS) hearing officer often responds when people say they need their license, “everybody needs a license.” That, however, has nothing to do with the actually being able to win it back. 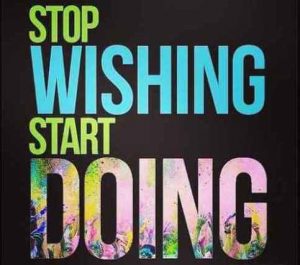 This article was suggested by my Ann, my senior assistant, after a long day of talking to people and answering questions about the Michigan driver’s license restoration process. My office handles about 200 license appeals each year. Because I guarantee to win every case I take, that requires us to screen out those callers who aren’t yet ready, and that, in turn, means talking to a lot of people. For all the questions you may have about winning your license back, let me ask this one about you: are you a wisher, a wanter, or a doer?

You learn a lot when you deal with the public in any capacity. In the context of being a Michigan driver’s license restoration practice, we see how people fit into certain patterns. Some people are just plain angry that they’ve lost their license, but have little to no interest about dealing with the drinking that created their predicament. These people wish for things to be different, just like we all wish we could win the lottery. Others go one step further, moving their wish into a want by actually making some effort to regain the ability to drive.

This can be as simple as just gathering information about the license appeal process (often winding up here, on this blog), but at least they do something more than just “wish” to have their license back. To extend my lottery analogy a bit further, these are like people who go out and buy a ticket. As much as you can’t win the jackpot unless you play, you can’t win your license back by doing nothing more than wishing.

The doers are those who actually make the effort to win. Here’s where the lottery analogy stops, because unlike winning the lottery, winning your license back does NOT involve any luck. Whether you win or not is ultimately up to you and the steps you have taken to make that happen, like having quit drinking.

Above and beyond everything else, sobriety is the first and main requirement to win a Michigan driver’s license restoration or clearance appeal.

It is a non-negotiable pre-condition to winning your license back. As long as you have sobriety, then I have what I need to make your case a winner, guaranteed. If you still drink, however, all the wishing and wanting in the world won’t get you anywhere.

It’s understandable that, early on, everyone whose license has been revoked wants to know if there is some kind of workaround or hardship appeal in order to get past their license revocation and get some kind of restricted license. The answer is a hard and fast NO. Hardship appeals for multiple DUI’s were eliminated, by law, way back in 1992. There is no circumstance, including a life and death situation, where there is or can be an exception.

This means that, before anything else, you have to wait for your period of revocation to pass before you can file a license appeal. Revocations are imposed for either 1 year or 5 years (1 year if you have 2 DUI’s within 7 years, and 5 years, if you rack up 3 DUI’s within 10 years). If you get caught driving at any time before you do win your license back, you’ll get what’s called a “mandatory additional like revocation,” meaning that you get revoked all over again, and wind up sidelined for either another 1 or 5 years.

It’s from these initial calls that we can usually tell, right off the bat, into which pattern someone fits. Some people get mad (even at us, and we’re only the messenger!) and ask things like, “Well, how do they expect me to keep my job and feed my family without a license?” What almost always underlies that kind of attitude is that a person hasn’t even started to think about, much less change, his or her relationship to alcohol. These are the wishers. Whatever else, sober people don’t usually act this way.

A person who has had a real wake up call about his or her drinking has a much different perspective. Instead of being angry at the system, the person is mad at him or herself for getting into this situation.

Although they may not be legally able to undertake a license appeal at the moment, these folks have moved beyond merely wishing for things to be different and have taken some action to eventually turn their desire to drive again into a reality. These are the wanters; people who want to be able to drive themselves to work again, want to regain the trust and respect of the people who matter to them, and want to do what’s necessary to make all that happen

Of course, it’s also normal to want to know if there is any way to get one’s license back sooner rather than later, but those people who have honestly quit drinking understand that everything is a process, whereas those who get pissed off at the law, the state, and anyone else who tries to explain how things work are almost always still drinking. This kind of “mad at the world” attitude means the person hasn’t had enough yet, or, as it’s often described in the recovery world, hasn’t hit bottom yet.

Things are very different for people who are genuinely sober, because they invariably quit drinking for themselves. They do it because drinking has been causing too many problems, and they realize that it is the common denominator to all the things that have gone wrong in their lives, not the least of which is not having a license. They want to end the drama.

In the real world, nobody quits drinking because it’s working out so well.

For all the reasons a person may finally decide to put the plug in the jug, so to speak, winning back your driver’s license is never first and foremost among them. In fact, standing alone, that will NEVER be enough of a reason for a person to get sober, much less maintain it.

There are people who do stop drinking for some external reason(s) at first, but the commitment to “stay quit” and remain alcohol-free will have become personal in order for them to keep it up. Ultimately, as everyone who is really sober learns, you have to do it for yourself.

The driver’s license comes later, as a benefit of having quit for all the right reasons.

It’s those who have had enough, decide to quit drinking, and then do what’s necessary to make sure they don’t pick up again who are the real “doers.” These are the people who get back on the road with a valid driver’s license.

The path always leads from wishing to wanting to doing.

The real contrast here is between the wishers and the doers. You can wish for your driver’s license back all you want, but until you want sobriety enough to take the steps necessary to quit drinking for good, nothing changes. Once you want sobriety bad enough, and you make the changes necessary – by doing what’s necessary – to support an alcohol-free lifestyle, you will have put yourself in a position to be able to drive again, legally.

No matter which one you are, we’re always happy to talk with anyone, even in the hopes that, if you’re still drinking, we can help you tip the scales in favor of you quitting so that eventually, you can get back on the road again. If you need either to win back your Michigan driver’s license or obtain the clearance of a Michigan hold on your driving record so that you can get a license in another state, do your homework and read around. Then check around.  If I take your case, I guarantee to win it, so you’ll only pay me once.