Every day, and probably due in large part to this blog, my office is contacted by lots of people who need to win back their driver’s license.  In this short article, I want to strip away all the complex rules and procedures involved in the license restoration and clearance process and look at the single, core issue that is central to every license appeal – drinking.  If I was asked to explain what driver’s license restoration and clearances were all about in one sentence, I’d say this: To make sure someone convicted of multiple DUI’s can prove that her or she has not had a drink for a few years and has the commitment and tools to never drink again.  That’s the real “meat and potatoes” of it all. 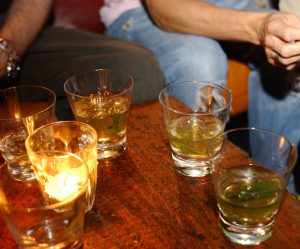 Everything about losing your license and then getting it back has to do with drinking.  To those who have not truly quit and believe they can safely indulge in adult beverages, the Secretary of State’s requirement that a person prove he or she has been completely abstinent and will remain alcohol-free seems like an obsession.  On the flip side, however, it also seems like an obsession that a person who has lost his or her license for multiple drunk driving convictions is still worried about being able to drink.  Believe me, I’ve heard every argument there is and I’m numb to them all because – and this is the big thing – the deal is that you will never qualify to get your license back until you’ve given up alcohol for good.  I understand how people feel about this, although, truth be told, I side with the state on this one.  The folks who are the best risk to never drink and drive again are those who don’t drink at all.  Opening the door even a little to believe someone who swears that his or her drinking is now under control can never be made to sound like a good idea, not even for a minute.

A long time ago, before I had hundreds and hundreds of driver’s license restoration articles published on my blog (the number stands at over 370 as of this writing), I was probably a bit harder to find on the internet.  A consequence of my consistent writing on this subject is that, to the person searching just about anything related to a Michigan license restoration or clearance issues, I come up pretty highly ranked, and, if you click on any of my stuff, it doesn’t take long to realize that I’ve written more than everyone else combined.  I’m actually proud of that, and believe that as much expertise as I have, the very act of researching and explaining everything logically has made me a better lawyer, as well.  The problem, though, is that many people will automatically find me and conclude that “he’s the guy,” call me, and think that just by offering to pay my fee, they can get back on the road.  It doesn’t work that way.  Sure, I guarantee to win every case I take, but, I ONLY TAKE CASES FOR PEOPLE WHO HAVE HONESTLY STOPPED DRINKING.  That’s not a bunch of hot air on my part, either, it’s the whole point of a license appeal, and it is the reason I won’t get involved in a case for anyone who is not genuinely committed to remaining sober.

The very idea that a person who cannot drive anymore because of drinking (and then driving) tries to argue that his or her relationship to alcohol is absolutely not any kind of problem sounds crazy when you think about it in the abstract, but plenty of people spend way more time thinking about their lack of driving privileges and arguing about the law than they do what got them taken away (drinking) in the first place.  Look, the bottom line is that if you have multiple DUI’s, at the very minimum, your relationship to alcohol is risky.  Plenty of people will to make the distinction that may it was risky in the past, but things are different now.  The catch is that the state is not going to bet anyone else’s life on that, which is essentially what someone who still drinks would be asking when they request a license.  It may be a crude analogy, but I always ask if someone would trust a twice-convicted pedophile to work closely with children?  And before you say, “but that’s different,” let me ask, how so?  What if the guy has been in counseling for years and years and swears he’s okay and doesn’t have those urges anymore?  Why would anyone ever take such a chance?  The bottom line is that it just doesn’t seem worth the risk.

The statistics, as far as drunk driving go, are overwhelmingly on the state’s side.  You won’t find any support for the idea that people convicted of multiple DUI offenses don’t have an alcohol problem.  The numbers stack up overwhelmingly in favor of the idea that anyone with 2 or more DUI’s has an alcohol problem, and the universally accepted “fix” for that kind of problem is simply to quit drinking.  When a person has had his or her driving privileges taken away for drunk driving, and despite all the difficulty that brings, his or her focus is on drinking again, it tends to show that drinking is too high a priority; certainly a higher priority than driving.

This means that the person who wants to complain how unfair it is that he or she can’t have a glass of wine with dinner, or – my favorite – that drinking is “legal” and it is therefore somehow illegal for the state to require him or her to prove they don’t do it anymore is, to put it bluntly, pissing against the wind.  As mad as such a person can be, and even if there are a few of these souls who were truly unlucky in racking up multiple DUI’s, and who really don’t have an underlying alcohol problem, the thing to bear in mind is that the state is NEVER EVER going to buy, or even entertain, for a moment, that kind of thinking.  The rule governing license appeals requires proving that you have been completely abstinent from alcohol for a time and that you are a safe bet to never drink again.  There is no room to prove that someone is any kind of “exception,” so all such arguments in that regard are a complete waste of time.

The takeaway here?  The license appeal process is about drinking, or rather, not drinking.  In that sense, it’s all about how your relationship with alcohol has ended, and when it ended, and how your life has changed since then.  This is pretty easy stuff to understand for those who have quit drinking and are enjoying sobriety.  I wanted this short article to make clear that the main focus of the license restoration and clearance process is to screen out anyone who is even a risk to drink again.  I also want the reader to take the time and think about this.  If alcohol has cost you the ability to drive and your continued relationship to it is preventing you from getting your license back, can you see a pattern here?  Is is not clear that it is the common denominator to all, or at least most of the things that have really gone wrong in your life?  How is it that drinking outranks, in importance, regaining your license?  Seriously, in all the ways not driving has ever held you back (everyone “needs” a license) and for all the opportunities that getting back on the road would present, drinking booze is still more important?

If you’ve lost your license for multiple DUI’s and need to get back on the road, I can help.  If I take your case, I guarantee to win it.  If you haven’t yet reached the point where you’ve grown sick and tired of being sick and tired and are ready to leave alcohol behind, call me anyway; maybe I can help tilt the scales in favor of you deciding to get sober.  You can reach my office Monday through Friday, from 8:30 a.m. until 5:00 p.m., at 586-465-1980.  We’re here to help.