As Michigan DUI lawyers, an important part of what team and I do everyday is address the concerns people have following a drunk driving arrest. Everyone with whom we speak is understandably worried about what will happen to them. Some people become extremely nervous, and it certainly doesn’t help that so many lawyer’s websites hype things up by using fear-based marketing to hawk their services. In this article, we’re going to flip that around, because some people are inclined to overthink their DUI and panic unnecessarily. 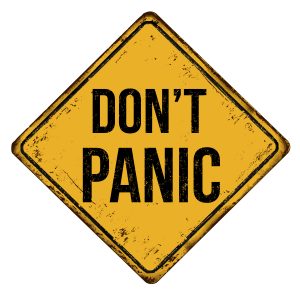 Let’s begin with a conclusion, and work from there: A DUI is nothing to laugh at, but it’s also NOT the end of your world, either. When handled properly, a 1st offense DUI charge can be made into more of an expense, and an inconvenience, rather than anything else. Of course, the court wants to make sure it’s a memorable inconvenience, but the real intention of the law is really to teach someone a lesson to not drive drunk again without ruining his or her life. As DUI lawyers, my team and I believe we have a moral obligation to make this clear and calm people’s fears, rather than play on them.

To be sure, it can be profitable for some attorneys when people get all freaked out about a DUI charge and rush to hire a lawyer, in the much the same way that it’s good for business when people have furnace problems in the middle of winter and need a heating and cooling (HVAC) professional. However, the kind professional you need should never capitalize upon or exploit your fear. That’s taking advantage of someone, and it’s morally wrong at every level. In the context of a Michigan DUI case, the good news is most of the fear a person has about what’s going to happen is misplaced, because things will work out.

You can take this as good news: Most of the things you worry about happening as a result of your DUI will not come to pass. This is particularly true in 1st offense DUI cases. Even in more serious cases, things can be managed, and the fallout limited.

On legal websites, it’s normal to find lists of all or most of the potential legal penalties a criminal or DUI charge carries. Here, instead of doing that, let’s look at 4 commonly feared consequences that either definitely, or at least probably won’t happen in a 1st offense Michigan Operating While Intoxicated (DUI) case:

1. It is highly unlikely that you will go to jail. This is generally true for everyone.

In fact, shortly before this writing, we handled 2 DUI cases on the same day in a very tough local court. The Judge gave the person called right before our cases some jail time (all the cases were very similar, with no significant differences), yet we managed to avoid jail for both of our clients. This was due, in large part, to the way we handle things, and the time and effort we put in to preparing our clients.

In most other courts, though, the simple truth is that jail simply doesn’t loom as a likely consequence in a 1st offense case, no matter who your lawyer is (or isn’t).

2. Unless you injured or killed someone, you will NOT lose the privilege to drive. This applies to everyone facing a 1st offense DUI that doesn’t involve and injury or death. Even a High BAC offense provides for a restricted driver’s license in short order.

The driver’s license penalties are set by law, and are fixed by the Secretary or State, meaning that a Judge cannot modify them in any way. In a 1st offense DUI case, the most lenient of those penalties simply requires 90 days of driving on a restricted license. There is no permanent loss of license for a 1st offense DUI of any kind, and a the law provides for a restricted license in all of them.

3. You are almost certain to NOT lose your job.

Unless you drive a school bus or an ambulance, or rely upon a CDL for your livelihood, then your employment is almost certainly safe. In the course of more than 30 years, and having handled thousands of cases, I have only known 1 client to ever lose a job after a DUI, and I genuinely believe that in that situation, the guy was already on his way out, anyway. By contrast, I have seen plenty of people who did drive for a living get re-assigned to a different position by their employers, rather than be terminated.

4. You will NOT lose any occupational or professional license that you have.

As far as professional or occupational licenses through the Michigan Department of Licensing and Regulatory Affairs (LARA) go, my team and I have represented people from every profession under the sun in DUI cases, and have NEVER had anyone have their occupational license revoked – or even suspended, for that matter – for a 1st offense DUI (or even a 2nd offense, DUI, for that matter).

Reporting a DUI conviction is required for certain professions, and in some cases, LARA may want more information to make sure a person does’t havor isn’t otherwise at risk to develop a drinking or substance abuse problem. This is particularly true for those in the health care profession, for obvious reasons. In those cases, we’ll make sure that, in addition to the legal information, we can also provide a reliable and thorough substance use evaluation to obviate any of the state’s concerns about our client.

These 4 things – going to jail, not being able to drive, losing one’s job, or suffering the loss of suspension of an occupational or professional license, are the biggest concerns for most people. Note that I am NOT saying anything like, “If you hire us, we can save you from these penalties,” but rather that you really aren’t at risk for any of them to begin with.

Accordingly, as you look around, I’d strongly suggest avoiding any lawyer who tries to sell the idea that he or she can “save” you from consequences that are not likely to happen.

To be sure, though, there is a lot that goes into getting better results in a DUI case.

In fact, there is a rather significant difference between just getting a “better” result as opposed to getting the very best possible outcome in any given case, but as a starting point, a person should be unburdened of the anxiety over penalties that simply aren’t on the menu, like going to jail, having driving privileges revoked, and losing one’s employment or professional license.

What we do, specifically, as Michigan DUI lawyers, is to make sure our clients avoid as many of the legal penalties and negative consequences as possible, and are able to put their DUI in the past and move forward unhindered by a mistake in judgment that just “happened.”

In that regard, here is the absolute gold standard in DUI cases, and it is the motto our firm lives by:

Success in a DUI case is best measured by what does not happen to you.

Of course, some things are going to happen, but if handled properly, a DUI can become, as mentioned at the outset of this piece, more a matter of expanse and inconvenience rather than anything else. This is why the best thing anyone facing a 1st offense Michigan DUI charge can do is NOT overthink this, because it will be okay…

While I am confident that our firm can and will produce the very best results possible in any DUI case we handle, the point I really want to make is that, at least here in the Greater-Detroit area of Wayne, Oakland, Macomb, Lapeer, Livingston, St. Clair and Washtenaw counties, a 1st offense DUI, while serious, is not going to ruin your life.

To make sure you get the best results in your DUI case, you should always put in a little time to compare lawyers and seek real information. This blog is a good place to start; it is the biggest resource anywhere. It’s fully searchable, and the DUI section, with over 550 articles to date, has more information that can be found anywhere else.

Avoid any lawyer or law firm that resorts to fear-based marketing, and that really was he goal of this article – to make clear that while a better lawyer can produce a better result, there is no reason to panic because a 1st offense DUI  is not the end of the world.

The simple fact is that, often enough, a DUI just happens (in Michigan, over 25,000 times each year, in fact), and if you find yourself facing a drunk driving charge, then instead of overthinking it, you need to relax a bit, quit worrying about what isn’t going to happen, and put the whole thing behind you.

If you’re facing a DUI, be a savvy consumer and read around. Pay attention to how different lawyers explain the DUI process, and how they explain their various approaches to it. When you’ve done enough of that, start checking around.

You can learn a lot by speaking with a live person.

All of our consultations are free, confidential, and done over the phone, right when you call. My team and I are very friendly people who will be glad to answer your questions, explain things, and even compare notes with anything some other lawyer has told you. We are always happy to have you call us back to clarify anything, or just speak further.