Recently, I published an article about how location matters in drunk driving (OWI) cases.  Because I generally limit my DUI practice to the Tri-County area, I am in front of the same Judges in Wayne, Oakland and Macomb Counties all the time.  In this short piece, I want to take a look at drinking and driving cases in the various Wayne County courts, and the 4 things you should know about them.  To be clear, a driving over the legal limit charge is a violation of state law, or a corresponding local ordinance (this means that it’s the same thing), so it’s not like a DUI in one place is any more or less of a crime than it is in another, but make no mistake, location is probably the most important single aspect of how a drinking and driving case will ultimately work out.  Still, as a DUI lawyer, the first question I ask anyone when the subject of a DUI comes up is, “Where?” 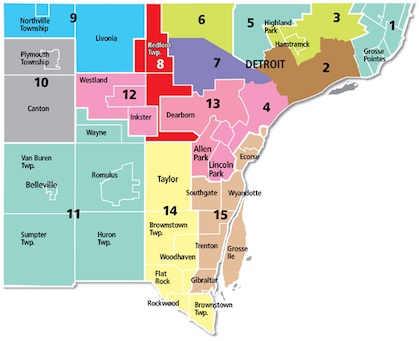 First, none of the district courts in Wayne County, from Harper Woods in the northeast to Plymouth/Canton in the Northwest, Woodhaven in the southeast to Romulus in the southwest, and points in-between, like Westland, Livonia, Wyandotte, Dearborn, are especially difficult places.  The Judges in all these courts are genuinely decent people, and that makes them welcoming to a DUI lawyer like me.  In the northern suburbs, you’ll often hear conspiratorial whispers about this or that Judge being especially “tough,” but fortunately, none of that is really true for any of the Wayne County district courts.  That’s not to say that these Judges are in any sense “easy” on DUI cases, but it does mean that there are no horror stories about the Judge from Hell to contend with here, either.

One of the best things about the Judges in the various Wayne County district courts is that they are generally “down to earth.”  I certainly always feel at home in these courts, although perhaps I just identify well with the prevailing mentality here, having myself been born and raised in Wayne County, on Detroit’s east side.  More important than how I feel, though, is how things work out for the client, and I can honestly say that I have seen some of the best “judging” take place within the various courts in Wayne County.  It’s a big county, and there are definitely different “vibes” depending on the location.  The Grosse Pointes (City, Farms, Park, Shores and Woods), for example, are very different than the Downriver area, and both are as different to places like Dearborn and Dearborn Heights as they all are to Western Wayne County.  Still, there is, fortunately, a cohesive “decentness” about all of these courts that means if you wind up facing a DUI anywhere within Wayne County, you’re doing pretty good, all things considered.

Second, and this is important – even if it doesn’t mean anything to the reader (in fact, the less you are familiar with this the better, because it means you’re not a veteran of the criminal justice system) – just about every court in Wayne County is more lenient that just about every court in Oakland County.  It goes without saying that any and everyone facing a DUI wants to be treated with as much leniency as possible, and that “decentness” mentioned above means that, almost without exception, the same drunk driving case in Wayne County will turn out better than it would in Oakland.  Accordingly, someone facing a 1st offense DUI is likely to have an easier and shorter term of probation ordered by a court in Wayne County than one in Oakland County, and even some places in Macomb County.

Third, a DUI will typically cost less in Wayne County than either Oakland or Macomb County.  This involves a lot more than just the expense of fines and costs, because the courts in Oakland County tend to impose the most frequent testing over the longest terms of probation, with Macomb County courts often following closely behind.  To be sure, for my clients, cost isn’t usually a major concern, but saving a $1000 to $2000 overall is still better than a kick in the pants.

Fourth, and finally, I have found some of the most understanding probation officers in the various Wayne County district courts.  In fact, many (but certainly not all) of the “nicer” probation officers in Macomb and Oakland Counties used to work in some Wayne County court or other, and then moved out to the suburbs.  This is not a hard and fast rule of any kind, but is more than just a casual observation on my part, and is backed up by almost-daily, regular appearances in the various courts of the Trial-County area.  The probation officer is the person who recommends your sentence in the first place, and then monitors your compliance with it thereafter.  This is a powerful position, and a difficult probation officer makes life itself unpleasant for anyone having to deal with him or her.

There is no grand lesson here beyond the fact that it is likely that someone facing a DUI charge somewhere in Wayne County will probably be treated more leniently than if it was in Oakland, and probably if it happened in Macomb County, as well.  There is no Court or Judge known for being over-the-top strict, or tough, in Wayne County.  Instead, there is a prevailing “down to earth” attitude amongst the Judges that makes the hardship of a DUI a little easier to stomach.  And let’s be honest, if you’re facing a DUI already, any break you can get is a good one.  I often call DUI cases “accidents of geography” because no one plans on getting one in the first place (they often just “happen”) , but if you wind up in this situation, better that it is somewhere that is more (as opposed to less) understanding, like in Wayne County.

If you are facing a DUI anywhere in the Metropolitan Detroit area (Wayne, Oakland or Macomb County) and are looking to hire a lawyer, do your homework.  Read articles.  Be a good consumer, and take the time to read between the lines, as well.  When you’re ready to pick up the phone and call around, you can reach my office Monday through Friday, from 8:30 a.m. until 5:00 p.m., at 586-465-1980.  We’re here to help, and consultations are done over the phone, right when you call, so you can get my take on your situation when it’s convenient for you.