What are the DUI driver’s license penalties for 2nd and 3rd offense cases? The explanation is rather straightforward, but almost always gives rise to more questions. Usually, people respond by asking things such as: “What about…” or “Is there a way to…?” The answers often result in a sense of frustration that’s expressed in responses like, “Well, how do they expect me to get to work?” In this article, we’re going to break down 2nd and 3rd offense DUI penalties in simple terms. 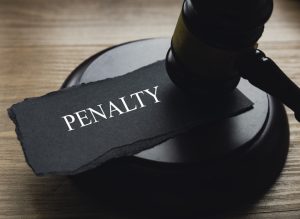 DUI driver’s license penalties are totally separate from the criminal penalties in OWI (Operating While Intoxicated) cases. The court has nothing to do with license sanctions, and cannot modify them in any way. DUI driver’s license penalties are imposed by the Michigan Secretary of State, according to law. Under that statutory scheme, the only thing that matters is the number of alcohol-related traffic offense convictions a person racks up within either 7 or 10 years.

In other words, if someone is charged with a 2nd offense DUI, but somehow gets a plea bargain to a 1st offense, the Michigan Secretary of State must count that as his or her 2nd DUI, and impose the DUI driver’s license penalties required for 2 alcohol-related traffic convictions within 7 years.

It’s the same thing if a person is convicted of a 3rd alcohol-related traffic offense within 10 years of his or her 1st. Even if a 3rd offense DUI charge gets reduced to a 2nd offense, as long as the person has had 2 priors and is convicted a 3d time within 10 years, the Secretary of State has to count it as number 3, and revoke the person’s license accordingly.

HOW THE TIME SPAN IS MEASURED FOR DUI LICENSE PENALTIES

That’s not how it works, however, as it relates to the criminal charge part of things. The law “stretches” the time periods as far as possible for purposes of charging someone with a 2nd or 3rd offense DUI. Indeed, some might argue that it stretches them beyond reason. Here’s how the time period is measured for criminal penalty purposes:

Now, assume that she was arrested again, on February 27, 2022 for her 2nd DUI. Assume further that this 2nd case also takes 10 months to resolve, meaning she’s not convicted until November 27, 2022 (7 years and 8 months after her conviction for her 1st offense).

For criminal penalty purposes, that counts as a 2nd offense because it’s the arrest date for that 2nd offense, and NOT the conviction date, that counts.

For DUI driver’s license penalty purposes, the only thing that matters is that her conviction for the 2nd offense did not occur within 7 years of the date of her 1st conviction. Thus, she will NOT be subject to a revocation for 2 DUI convictions within 7 years.

This means, of course, that managing time can be a critically important part of the defense strategy, at least at it relates to protecting a person’s drivers’ license, in a 2nd or 3rd offense DUI case. Of course, whether or not this is even relevant depends on the date of his or her s prior conviction(s).

Now, let’s see how this plays out in 3rd offense cases:

Remember that, in Michigan, any combination of 3 alcohol traffic offenses within a person’s lifetime can be charged as a felony. This is known as “Heidi’s law.” Although that’s important, it’s not what we’re focused on here. Instead, we’re looking at the driver’s license penalties for 3 DUI convictions within 10 years. As stated above, those are different from the criminal penalties.

Assume that Tipsy Tina was arrested for her 1st DUI on November 29, 2011. As in the previous example, her case took 10 months to wrap up, and she was convicted on July 29, 2012. Remember, it’s that conviction date that counts.

Thus, if Tina is convicted of a 3rd offense felony DUI on or after July 30, 2022, she will NOT be subject to the DUI driver’s license penalties for “3 within 10” because she was not convicted of 3 DUI’s within 10 years.

As we noted above, this could potentially be an important strategic consideration for her lawyer.

If a person’s license is revoked, the law sets very specific time frames for how long he or she must wait to file a driver’s license restoration appeal. If a person’s drivers license gets revoked for 2 DUI convictions within 7 years, he or she cannot file a license appeal for at least 1 year.

That, however, is very misleading, for a lot of reasons, all of which are beyond the scope of this article. In the real world, a person revoked for 2 DUI’s within 7 years has essentially no realistic chance to win his or her license back for at least 2 years.

Our firm, for example, won’t even consider moving forward with a license appeal case unless a person has been completely alcohol and drug free (this includes recreational marijuana) for a minimum of 18 months. He or she must also have been off probation for the better part of a year before filing, as well.

In practice, this means that someone going through a 2nd offense DUI won’t be able to get back on the road until after 2 years have elapsed.

There is, however, a big exception to this, and that occurs if he or she is admitted to and completes a sobriety court program. This is a HUGE deal. We’ll get to it later, because it also applies in 3rd offense cases, as well.

Aside from the possible exception for sobriety court admission, the realistic DUI driver’s license penalty for a 2nd offense conviction within 7 years will generally leave a person unable to drive for 2 years or more.

When someone is convicted a 3rd DUI within 10 years of the conviction date of his or her 1st offense, then, and as we saw earlier, his or her driver’s license will be revoked for life. The “3 within 10” rule mandates that he or she cannot file a license restoration appeal for at least 5 years.

This, of course, is different from – and much longer than – the mandatory 1-year (and, in practice, at least 2-year) waiting period for 2 DUI’s within 7 years.

An important difference is that very often, once that 5-year period has run, a person can generally file for the restoration of his or her license right away. Of course, he or she must meet the sobriety requirement established by law.

For what it’s worth, our firm will generally wants anyone with 3 DUI’s to have been completely alcohol and drug-free for at least 3 years before we’ll move forward with a license appeal case. The good news is that this isn’t an issue for many people, and they can be ready to proceed with a license restoration as soon as their 5-year revocation period has run.

To be clear, if a person is convicted of a 3rd offense DUI, but the conviction date for that 3rd offense falls outside the 10-year period from the date of conviction for his or her 1st offense, the 5-year revocation does not apply.

Here’s a hypothetical to help illustrate:

Then, in 2019, she was arrested for and ultimately convicted of a 3rd offense DUI.

In her case, for purposes of  DUI driver’s license penalties, she would treated as a 1st offender, because the 2019 arrest would trigger neither a “2 within 7” nor a “3 within 10” situation.

As mentioned above, there is one exception that can save a person’s driver’s license in a 2nd or 3rd offense DUI case. If admitted into a sobriety court program, the Judge can override the mandatory revocation of his or her license and grant restricted driving privileges.

It’s also a rather involved subject in its own right. Accordingly, I would direct the reader to check out the linked articles. They explore the whole subject of sobriety courts in far more detail than we can get into here.

Back in 2011, Michigan began a sobriety court pilot program. The idea was to provide extensive treatment to repeat offenders, either for free, or for pennies on the dollar. In exchange for their participation in such an intense rehabilitative program, they become eligible to regain driving privileges that, as we saw above, would be otherwise unavailable for years to come.

Sobriety court programs have proven to be a resounding success. My team and I always explore this subject with our 2nd or 3rd offense DUI clients.

It’s worth pointing out that, as Michigan DUI lawyers AND Michigan driver’s license restoration lawyers, this is actually NOT in our financial interest. We handle over 200 license appeal matters per year. From a purely business point of view, it would be best for us to have our clients avoid sobriety court and then hire us later on, to get their licenses back.

We’re honest people, though, so we don’t do that.

Instead, we encourage ALL of our 2nd and 3rd offense clients to consider sobriety court because it’s in THEIR best interests to do so. We explain how much money they can save on by not having to file a license appeal and get back on he road in a matter of days, rather than years.

That’s usually enough to at least get someone to take a look.

The “catch” to all this is that sobriety court programs are designed for people who really want help to quit drinking. They are not a way to just avoid losing one’s license. A person must be screened for admission into one of these programs, and the first qualification is that he or she must genuinely want help to get clean and sober. For those that do, though, sobriety court programs offer an incredible opportunity.

By way of review, we can summarize the DUI driver’s license penalties in 2nd and 3rd offense DUI cases as follows:

• 2 DUI’s within 7 years (as defined above) – mandatory lifetime revocation of the driver’s license.

A person cannot file for restoration for at least 1 year, although he or she will need to have been sober for at least 18 months. Also, a good part of that clean time must occur after his or her release from probation. This means that the reality for almost everyone is that it will be AT LEAST 2 years before he or she has any chance to win a license appeal case.

• 3 DUI’s within 10 years (as defined above) – mandatory lifetime revocation of the driver’s license.

A person can file for restoration after 5 years. Our firm will generally want at least 3 years of clean time before we’ll move forward with any such case.

Remember, the courts has NOTHING to do with license sanctions. The ONLY way to avoid these DUI driver’s license penalties is for a person to be admitted into a sobriety court program. Sobriety court Judges can override the mandatory revocation after 45 days and grant restricted driving privileges.

If you are facing a DUI charge, or looking for a lawyer to restore your driving privileges, be a wise consumer and read around. Pay attention to how different lawyers explain the processes involved in each of these legal areas, and how they explain their various approaches to them.

This blog is a great place to start. With, as of this writing, over 590 articles in the DUI section, and more than 660 in the driver’s license restoration section, the reader can find more information in them than any and everywhere else combined. The blog is updated weekly, and it’s also fully searchable.

When you’ve done enough reading, start checking around. You can learn a lot by speaking with a live person. Make sure to give our office a ring, as well. All of our consultations are free, confidential, and done over the phone, right when you call.

My team and I are very friendly people who will be glad to answer your questions and explain things. We’ll even be happy to compare notes with anything some other lawyer has told you.