As Michigan DUI lawyers, our firm lives by the standard that “Success in a DUI case is best measured by what does NOT happen to you.” If you’re facing a Michigan DUI charge, you want to get out of it as quickly, painlessly, and completely as possible. Although that seems beyond obvious, there is actually an important interaction between those 3 elements that controls how a Michigan DUI case can ultimately be resolved. In this 4-part article, we’re going to focus on those things, and how they combine to produce what matters most in a DUI case – results. 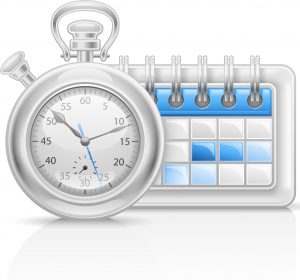 In this first installment, we’re going to focus on getting through your DUI case “quickly.” Of course, nobody wants to have a DUI charge hanging over their heads any longer than it has to, and the sooner it’s not, then the better. However, just getting “rid” of a case as quickly as possible is usually NOT the best choice. Instead, we have to look at time as an element. Often, it can be a tool used to help get the best possible outcome, while in other circumstances, like when a DUI case is assigned to a Judge who is short on patience, it can be an adverse factor we have to work around.

Because we are a full time Michigan DUI and driver’s license restoration law firm, my team and I work on drinking and driving cases all day, every day. We know, from extensive experience, that for any of many reasons, some cases can be wrapped up more quickly than others. There are some Judges who push DUI cases through way faster than the speed of light, while there are those who will allow the defense lawyer a lot of time to work things out. Most Judges, however, fall in-between, and want to move cases along without unnecessary delay, but don’t seem obsessed with closing them out at all costs, either.

Unfortunately, when some Judge is dead-set on clearing his or her docket at warp-speed, it’s the person going through the DUI who will ultimately bear most of those costs. Above and beyond everything else, my team and I have to fight for our clients, and that doesn’t just mean objecting to evidence; it means doing whatever is necessary in order to produce the best result in his or her case, including using intelligent and proper strategies to slow it down when doing so will have a positive effect on the outcome – as it often does.

To be clear, we’re talking about slowing down a case that has formally begun in the court system. Lately, there has been an increasing and ongoing delay from the time of a person’s DUI arrest to when his or her case actually “starts” in court.

As of this writing, in February 2022, there is a pretty large backup of DUI cases because of the increased number of blood draws, versus breath tests, mostly as a consequence of the Coronavirus pandemic. It used to be that blood draws were pretty much only done when someone refused a breath test, but now, they have become the first choice for chemical testing in many jurisdictions.

Whereas breathalyzer tests produce an immediate result, a blood sample must be taken in a specific manner, deposited into a special container, and then sent off to the Michigan State Police Crime Lab for testing. Once there, the sample will wait – for who knows how long – to be analyzed before the results get sent back to the arresting law enforcement agency.

As a consequence of this new reality, there is no way to either “hurry up” or delay a case that hasn’t even formally started because the chemical (blood) test results haven’t come back.

Once a DUI case has officially kicked off, though, my team and I have to use the element of time to our client’s best advantage.

Let’s begin with this general principle: It’s almost always better to slow down a DUI case, rather than let it go faster.

In practice, there is seldom a good reason for getting it wrapped up sooner, rather than later. I can’t get into very much of the “why” here, without revealing some proprietary strategies (secrets) that are best given away, but the simple fact is that working a DUI case for longer usually produces better results, period.

Once in a while, however, it is better to “speed things up,” but such cases are the exception, and not the rule.

Here are 2 examples to help explain all this. Please note that they’re oversimplified for illustration purposes, because if they weren’t, each one could take 10 pages on its own:

Assume Lucky Larry gets arrested for OWI (Operating While Intoxicated, the actual term for what everyone just calls “DUI”) and takes a breath test which shows that he was well over the legal limit. For some reason, the police missed the fact that he had 2 prior offenses more than 20 years ago, making this one the 3rd DUI in his lifetime.

Larry is released the next day with a citation for “OWI.”

In Michigan, a 3rd DUI in a person’s lifetime is a felony.

He calls around, and winds up hiring our firm. We quickly realize that as soon as any prosecutor reviews Larry’s case, the oversight will be found, and he will be charged with a 3rd offense (felony) OWI.

Accordingly, we set up an arraignment right away and plead him straight-up guilty to the charge that’s on his ticket – OWI.

Because of the prohibition against double-jeopardy, Larry cannot be re-charged, and will have entered a quick guilty plea to a 1st offense in order to avoid a 3rd offense.

Of course, the court and everyone else will eventually figure this out, but there isn’t a Judge or prosecutor who wouldn’t agree that, as Larry’s attorneys, we got him a real break and did a good job.

Larry got a huge benefit from having this case moved along so quickly. Of course, this circumstance is certainly an exception, although my team and I actually have done this very thing in real life.

Here’s a second example that’s far more common, and something our firm does all the time:

Imagine Bad Luck Brenda gets arrested for a DUI and is charged with a High BAC offense. Brenda admits that she’s been drinking a bit more than she’d like lately, and has struggling with her alcohol intake in silence.

She hires our firm, and we get her in with our main counselor, who she finds very helpful.

Initially, the prosecutor is unwilling to reduce Brenda’s High BAC charge. Not ready to simply take “no” for an answer, and believing that we can do better, we slow the case down, and persist with our attempts to negotiate a plea bargain.

Finally, and because we never gave up, a glowing report from the counselor turns out to be enough to convince the prosecutor to relent, and Brenda is allowed to plead guilty to the far less serious charge of OWVI (Operating While Visibly Impaired, or “Impaired Driving”).

This saves her points, money, and, perhaps most important of all, spares her the loss of the ability to drive for a while.

Brenda’s better result came from slowing things down and really “working” the case.

Although there is an almost infinite number of variables that can affect how any DUI case will resolve, as a general rule, the passage of time never hurts, and, indeed, usually helps drive a better result.

I could not count, over the course of my 30-plus years as a DUI lawyer, how many times a new client has said something to the effect that “I just want this over with.”

Here’s where I want the reader to pay attention, because this is important: If my team and I went along with every person who said they “just want this over with,” we could cut out a lot of time and work on the cases we take, and get paid the same money to close these matters out more quickly.

We don’t put in so much time and effort into our cases because we’re bored – we do it because we know exactly how to bring about the best possible result. We live and work by the Golden Rule – treat others as you would wish to be treated.

I know that if I was injured and wheeled into a hospital while unconscious, I would certainly hope the attending physician would do all the “right” things to really fix me up, rather that just taking whatever shortcuts so he or she could in order to just be done with me as soon as possible and get home sooner.

The point, of course, is that it would be far more profitable for us to just get every case “over with” as soon as possible, but we don’t do that precisely because it’s NOT the right thing to do.

Who wouldn’t want to do less work in less time for the same money?

That’s how our firm operates.

In fact, precisely because our Michigan DUI law firm charges a flat fee in DUI cases, our clients never have to worry about us “jacking up” the bill. If we get one case wrapped up super fast, then good for us, but if the next case takes 5 times as long, then, well, that just comes with the territory.

If this article was some BS piece about why it’s better to resolve a DUI case sooner rather than later, then the reader could wonder whether about the underlying motive being a way to sell someone short and get paid for doing less.

However, because I’m arguing the OPPOSITE here – that it’s almost always better to NOT hurry through anything but the most exceptional case – there is no such question.

Instead, what we’re talking about is a real-life application of the Golden Rule .

Although it’s rarely a better choice to hurry any DUI case along, the right thing in any case is always to handle it as quickly or slowly as necessary under its own unique facts and circumstances, and doing what’s best to get the client out of it with the fewest possible legal penalties and negative consequences.

Of course, it’s also true that there is no good reason for unnecessary delay in any case (especially if someone is getting paid by the hour). Unfortunately, there are some lawyers who make a lot of noise and can put on a real “dog and pony show,” all on the client’s tab.

Whatever else, and as we’ll see in the final part of this series, time must be “worked” in a way to get someone out or or otherwise past his or her DUI case as completely and painlessly as possible.

And that, of course, means avoiding as many of the potential legal penalties and negative consequences as possible.

We’ll stop here, and come back in part 2 to look at what it means to get out of a DUI case as painlessly as possible, which, as we’ll see, basically translates to avoiding as many of the legal penalties and negative consequences as possible.