As busy Michigan DUI lawyers, we know that absolutely everyone going through a drunk driving case is going to have to answer some direct questions about his or her drinking. Those questions are standard in every DUI case, and asked as part of a larger court screening process that tries to determine whether the person has, or is at risk to develop, a drinking problem. In this article, I want to shift the focus from the official inquiry about a person’s drinking to a private and more personal conversation about the reader’s relationship to alcohol. 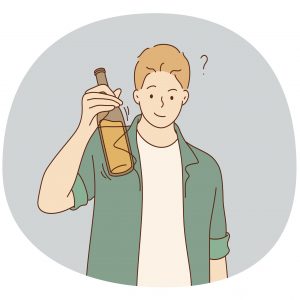 It’s likely (although unfortunate) that a lot of people are going to blow off this write-up, but my hope is to speak sincerely to those who do take the time to read it. As much as I want to use my written words to begin a conversation of sorts, what I’m really trying to do here is allow someone to open up to themselves WITHOUT fear of judgment, and without having to answer to anyone else. If you have ever wondered about your drinking, even for a moment, then let’s take the time to look over a few things that may be helpful in evaluating whether your relationship to alcohol has become troublesome.

Before we start, let me explain a little bit about myself: I have been a DUI and driver’s license restoration lawyer for more than 30 years, and in that capacity, how people use alcohol is central to everything my team and I do, all day, every day. Because of that, and after about 20 years as a practicing lawyer, I returned to the University campus for a formal, post-graduate program of addiction studies. This provided me with a broad and comprehensive understanding of the development, diagnosis and treatment of alcohol and substance abuse problems, as well as the many ways people recover from them.

Although I understand the language of clinicians, I have no illusion that I am one. However, my education and unique life and professional experience allows me to speak about alcohol and drug problems in a way that some – especially anyone facing a Michigan DUI charge – might find “real” in a rather welcoming way.

With that in mind, let’s begin with this very frank observation:

There is a good chance that, if you’ve read this far, you have wondered, to some extent, whether or not your drinking has caused you some problems.

This is particularly important for people who don’t drink all the time.

It’s obvious when someone drinks every day and wakes up with the shakes that he or she has a problem, but those are really extreme cases, and represent a minority of people for whom alcohol has become a problem.

The majority of people who have a troubled relationship to alcohol are nothing like the stereotype of a hardcore, inveterate alcoholic. No matter what, all drinking and drug problems start small, but a small problem is still a problem.

And that brings us to a key point. Some years ago, I was speaking to a substance abuse counselor about a case, and she imparted a bit of wisdom that has stuck with me ever since:

Anything that causes a problem IS a problem.

Think about that for a moment. It may help to consider something other than one’s drinking to grasp the universal truth of that statement.

For example, imagine that your furnace sometimes makes a really loud squeaking noise, and when it does, it wakes you up in the middle of the night.

As it turns out, the furnace is fine, but the fan needs lubrication. It could run forever the way it is without failing, but when it squeaks, it costs you hours of sleep and drives you nuts.

The squeaky fan is causing a problem, and, therefore, it IS a problem.

The same thing applies to drinking. Human nature being what it is, it’s natural for someone who is confronted or otherwise wonders about his or her drinking to look to someone else, whose drinking is worse, and then compare themselves favorably.

This is usually easier for someone who is more of a binge drinker, and/or who generally confines his or her drinking to the weekends, rather than someone who drinks all the time.

As my late father used to say, here’s the thing: If you’re reading this for yourself, and you have some kind of feeling, deep in your heart of hearts, that something isn’t right, then it’s probably not.

To be perfectly blunt about it, almost nobody wonders about his or her drinking unless there is something up with it. By the time concerns about one’s alcohol consumption start bubbling up to the surface of his or her consciousness, it’s more likely than not that there is something to it.

For all the clinical analysis that may apply here, none of it is more import than that lingering question a person has about whether or not there is some kind of problem with his or her drinking.

In practice, lots people can admit that their drinking may have gotten a bit out of hand on a few prior occasions, but then they’ll promise themselves that they’ll monitor their alcohol use in the future and keep things in check.

This can be a real sticking point, because virtually everyone who has had to make such promises runs into trouble fully keeping them.

When someone is wondering if his or her drinking might be a problem, there are a few questions he or she should ask themselves:

•What areas of my life are being or have been impacted by my drinking?

If you’re reading this after an arrest for OWI (Operating While Intoxicated), then you already know something about that.

•Is drinking, or has it, in some way, impaired any of my relationships?

Don’t qualify your answer to this question by including what others do in an attempt to shift the focus away from yourself.

•Am I losing things?

A person should ask him or her self this question in the the broadest sense, meaning has he or she lost friends, relationships, or opportunities?

Most people will likely find this article while they’re searching for information about a pending DUI charge. That’s as good a time as any to take an honest and private look at your drinking.

When considering the questions above, some people will figure out a way to deflect the inquiry or somehow “massage” their answers to avoid confronting the reality of their drinking, and that is pretty strong evidence that, as the saying goes, “something ain’t right.”

That leads us right back to the idea that if you have any kind of nagging feeling or question about your drinking – even only if after you drink and things don’t go as well as you had planned – then there is probably something amiss.

Here’s some good news: We are long past the days of merely telling everyone with concerns about their alcohol use to go to AA meetings.

AA is a great program, but its overall success rate is horrendously low, and it’s simply NOT the right fit for most people.

Now, in the 2020’s, there are all kinds of ways for people to get help. One of the best is to work with a skilled counselor, and the idea of one-on-one meetings is more preferable option for many people.

That said, counselors are like the salsa at Mexican restaurants: every one is different.

For example, Dave might go to Karen the Counselor, and think she’s great.

Lisa might go to Karen and just find that they don’t “click,” but discover that she can work very well with Tina the Therapist, instead.

In other words, everybody has different needs and preferences, and it’s important to find a counselor who meets them.

For our part, my team and I know this.

That said, we’ve had tremendous success with our main counselor. We’ve sent many people to her for something like a substance abuse evaluation as part of a DUI case who have then decide to continue seeing her because they liked her so much.

The simple reality is that different counselors have different approaches to their work.

Personally, I favor a “holistic” approach, meaning that a counselor (like ours) is not stuck on any one way of doing things, but rather focuses on helping the person find the whatever method works for them.

Here, I must reiterate that the point of this article isn’t to directly “fix” anything, but rather to help a person have an honest conversation with him or her self to see if it might be time to reach out for a little help.

Of course, my team and I are always glad to assist in talking about your drinking, and helping you sort through things, and we’ll do this with kindness and patience – and without any judgment.

Whether you’re wondering about your drinking or not, if you’re facing a DUI charge anywhere in the Greater-Detroit area (meaning anywhere in Wayne, Oakland, Macomb, Lapeer, Livingston, St. Clair or Washtenaw Counties) and are looking for a lawyer, do your homework.

Be a wise consumer and read around. See how different lawyers explain the DUI process, and how they explain their various approaches to it. When you’ve done enough of that, start checking around. You can learn a lot by talking to a live person.

All of our consultations are free, confidential, and done over the phone, right when you call. My team and are very friendly people who will be glad to answer your questions, explain things, and even compare notes with anything some other lawyer has told you.