If you’ve been arrested for a DUI in Michigan, you could almost spend forever reading websites and relevant blog articles.  Sometimes, for as much information as a person can find, it is just better to avoid getting overwhelmed and simplify everything by finding a lawyer you can trust to examine and handle everything for you, especially if you’re not being overcharged or getting sold out.  In my role as a Michigan DUI lawyer, I have published well over 250 DUI articles, and most of them are rather detailed, often providing an up-close examination of one, or just a few key aspects of the drunk driving case process.  In this article, I want to skip all of that and focus, instead, on the very real experience of just wanting to get past a DUI as painlessly as possible while knowing that the facts of the case were properly checked out and that the course of action you choose is the absolute best, under the circumstances. 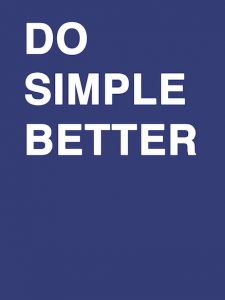 We cannot overlook that there is big money in the more complicated approaches marketed by some lawyers.  The simple truth, however, is provided by the Michigan State Police Annual Drunk Driving Audit.  This audit is required by law and accounts for every single drinking and driving arrest that takes place each year, as well as every step taken in every one of those cases in every court within the state:  Last year (2015), out of 43,553 DUI and related arrests in Michigan, only 62 people fought their cases at trial and won.  That equals .144% or, to put it in words, zero point one four-four percent, meaning less than .15 percent.  Over the last 5 years, from 2011 through 2015, there have been 244,839 DUI related arrests in Michigan; only 334 of those people went to trial and were found “not guilty” dropping the average success rate from .144 in 2015 to .136% over that 5-year period.  A quick perusal of lawyer websites reveals the popular marketing tactic of listing all the things that “could” potentially be wrong with a DUI case, although, as the numbers show, not often enough to even equal one-quarter of one percent acquittal rate.  A variation on this theme is to run through all the things the police must get right for a DUI charge to stand up in court.  You can do that with just about anything in life and make success sound like a miracle, but the fact is, we all do things involving multiple steps a million times every day without incident.  Making coffee can be made to seem like a ballet of complicated and risky steps, but for most of us, it’s something we do almost on auto-pilot.  Once in a while, we might turn on the coffee maker before we’ve added water, or maybe added 1 scoop of coffee too few, or too many, or even drop and break the mug, but those are the exceptions, and not the rule.  Ditto for DUI arrests.

At the end of the day, a DUI case is all about being able to prove that the person arrested was over the legal limit at the time he or she was driving.  The protections of the legal system are put in place to keep an innocent person from being found guilty of a crime he or she didn’t commit.  If you were not drinking, or you only had 1 or 2 drinks with dinner, then the system is supposed to prevent you from being convicted of DUI.  If you did have a few too many, however, then your only hope to get out of the case completely is that the police hopelessly bungled the evidence against you.  And while things do go wrong for the police once in a while, for the most part, they’re typically not botched so catastrophically that you’ll find a Judge who is anxious to throw a DUI charge out of court.  Judges do NOT view drunk driving cases as a game in which they sit and just hope to find some technical little flaw in the evidence so that they can dismiss all charges.  When is the last time you ever heard of that happening in a drinking and driving case, or, for that matter, ever heard about a Judge known for being “easy” on drunk drivers?  The answer, of course, is never.

As you read around the web, you’ll find that some lawyers will, for example,  promote having a breathalyzer machine in their offices, or that they, or someone on their staff has undergone breathalyzer machine training.  A well-known criminal attorney once said to me that even if a particular lawyer can take that machine apart and put it back together while blindfolded, that knowledge is almost entirely worthless in the real world.  Even assuming that breathalyzer issues accounted for the reason every single one of those lucky few people were found not guilty after trial, it only matters to less than .15% of all people arrested (just 62 out of 43,553 in 2015).  The point I’m making is that a DUI already sucks enough, and for the vast majority of people, the instinct is to put it behind them, get through the DUI, get on with life, and make the whole thing as painless as possible.  Of course, every bit of evidence should be examined to make sure that the charge is sound, that proper procedure was followed, and that the evidence has been carefully analyzed to ensure that you’re not missing something that could get the case thrown out.  In other words, any and everything that can be used should and must be used to produce the best, as in most lenient, outcome possible.

Now, for all of that, it’s worth noting that in 2015, about 651 of those 43,553 DUI-related arrests were dismissed before trial, which is equal to about 1.49% overall.  While not odds you’d want to bet your retirement on, that still means that almost 2 out of every 300 DUI cases does have some flaw strong enough to convince a Judge to toss it out of court.  This may not be the basis of an inflexible plan of defense, but it does mean things have to be checked out.  The secret to beating a DUI case is to look for a way out of it.  DUI cases don’t dismiss themselves, so the lawyer MUST examine the evidence carefully, but that does not mean that he or she should charge more for a DUI than you’d pay for a hip replacement, either.  A thorough examination of the evidence is, or at least should be automatic when you hire a DUI lawyer.  Of course, the bargain, or cut-rate lawyer isn’t set up for that kind of work, and offers his or her services based upon a calculation of minimal work and maximum turnover (“plead ‘em and bleed ‘em”).  Even if the discount lawyer wanted to, he or she probably wouldn’t know what to look for by way of flawed evidence.  The opposite side of that coin is an overpriced lawyer who challenges everything in a kind of legal “fishing expedition.”  The client will often be impressed at the reams of documents the lawyer obtains and will not really have much idea that the lawyer is getting nowhere despite all the paperwork and trips to court.  I can pound this home all day long, but all you need to do is look at the actual numbers provided by the courts and listed in the Annual Drunk Driving Audit.  We all know that statistics can be twisted, but those numbers are accounting, not statistics, and they do more than just tell an unbiased story; they pretty much tell the whole story.

So you begin the journey through the DUI process the right way, by asking some basic questions:  Is the case against me solid?  Did the police do something, or not do something, that might make a difference?  If you’re facing a DUI charge, there is less than a 1.75% chance of getting it thrown out or beating it at trial.  Ask yourself this – are you being falsely accused of driving over the limit?  In many of the cases that get tossed out, there are no breath or blood test results, so who can know the answer to that question.  Sometimes the police are called about a driver all over the road and by the time they find the car, it’s parked in someone’s driveway.  When the owner answers the door and he or she is obviously drunk, common sense tells us one thing, but legally speaking, how can it be proven that the person was actually the one driving the car, or that he or she didn’t gulp down booze immediately after parking and getting out of it?  These are the kinds of flaws that most often get cases thrown out.

If you were pulled over after having had too much to drink, the thought of making things worse by paying some lawyer to fight (and lose) over every obvious detail probably doesn’t seem pleasant.  Three days before I began this article, I was sitting in a local, Detroit-area court while some lawyer did just that.  It was painful to watch.  As a matter of conscience, I wanted to tell the client to get a new lawyer, but I couldn’t.  As I walked out of the court, speaking with my staff on the phone about what I had just seen, we kind of joked that the one of the worst things that ever happened to me financially was having a conscience.  From a purely economic point of view, I would be way ahead if I could just not be so damned hung up on doing the right thing, but I cannot shake the moral requirement of treating others as you would want to be treated, especially when it comes to matters about which you must trust another’s judgment.  I know if the lawn guy is charging me for a cut I didn’t get one week, but I have no idea if my cardiologist is ordering tests that are unnecessary.  I can only believe that he is honest and operates the same way I do (and yes, I believe that about my doctor).

How do you make things better in a DUI case that’s part of the 98-plus percent of cases not thrown out of court?  Through hard work and intelligent handling.  The best results are achieved in DUI cases through combining knowledge of the facts and the law with the proper management of time, science and perception.  That’s not a bunch of double-talk, either.  In the next article, we’ll take a look at what that means.  For now, we can leave with the comfort of having confirmed that in most DUI cases, the best, and really only intelligent course of action, is to just get through it as efficiently, with as little damage as possible.  Fight when you can win, but don’t do it just for the sake of spending money and fighting everything while hoping for a miracle.  When there is no likely way out of a case except an unlikely miracle, take what you have and make it better, rather than closing your eyes and merely wishing for it to go away.

If you have been charged with DUI in any court in Macomb, Wayne or Oakland County, I can help.  If you’ve read this far, then you’re doing things right; take the time to read what I’ve written.  Then, compare it to what other lawyers have written.  Read as much as you can, and cross off of your list those lawyers who don’t provide any analysis of substance or to whom you aren’t naturally drawn.  Chances are, if you have a gut instinct that you don’t like someone, you’re probably right.  When you narrow down your choices, pick up the phone and call around.  On my end of the line, consultations are done over the phone, right when you call.  You can reach my office Monday through Friday, from 8:30 am until 5:00 pm, at 586-465-1980.  We’re here to help.