In this short article, I want to examine how I do license reinstatement cases for out-of-state residents who need clearance of a Michigan hold upon their driving record. In the previous article, I explained how I do driver’s license restorations for Michigan residents.  Here, we’ll look at how I use that same process, in a slightly modified way, for people who live elsewhere.  In terms of the restoration of a Michigan driver’s license, proving sobriety is the absolute key to success in any case where a person’s license has been revoked for multiple DUI convictions.  Given a genuinely sober client, I guarantee to win the clearance of Michigan Secretary of State’s hold in the same way that I guarantee a win in every driver’s license restoration case I take.  Pushing aside all the legal mumbo-jumbo, there is a very simple litmus test to determine who makes the cut: If you have really quit drinking, then you know how very different your life is today than it was back then.  The transition from drinker to non-drinker is profound, and it affects pretty much everything, from the way you feel physically, emotionally and even spiritually, to who is a part of your life and how you get along with them, and even your financial well-being.  If this describes you, then you’re in.  If not, then we’ve got to get you there. 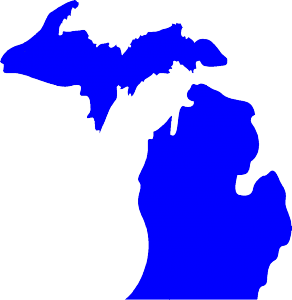 As part of the metamorphosis that one goes through while getting sober, people sometimes move out of state.  While some leave to take advantage of better opportunities (and often better weather; 3 of the 6 license appeal hearings I held the week this article was written were for people who had moved to warmer climates), some people move in order to get away from bad influences, or to start fresh.  For all the things one can leave behind, however, the revocation of a Michigan driver’s license or driving privileges is not one of them, and it will follow, thereby preventing a person from getting a new license in another state.  Once in a while, I’ll encounter someone who was lucky enough to get an out-of-state license years ago, but cannot now renew it because he or she has finally been snared by the National Driving Register (the official NDR is the National Driving Register, not the similarly, but deceptively named commercial website using the name “National Driving Registry”).  At the end of the day, however, the fix to get back on the road remains here in Michigan, so let’s see how I make it happen.

The reader should first read both part 1 and part 2 of the previous article about how I do Michigan driver’s license restoration appeals.  Quite literally, everything in those articles applies here except the timing of the substance abuse evaluation.  In fact, the ONLY difference between the way I do license restoration cases for Michigan residents and clearance cases for those who now live out of state is that when people come from far away to see me (even those who live in Michigan), we always arrange it so that they have their substance abuse evaluation scheduled for that same day, and will leave our first appointment and go directly to the evaluator’s office.  Beyond the “how” I do this way is the all-important reason of why I do it this way…

I’d estimate that about 2/3 of my out of state clients have previously tried to clear a Michigan hold by filing an “administrative review,” a kind of appeal-by-mail that is, statistically speaking, rather doomed to fail.  By the numbers, 3 out of 4 such appeals are denied each year.  If you’re reading this, its either because you’ve already learned that the hard way, or you haven’t tried yet, and are wondering.  If you’re thinking about trying an administrative review, beyond me repeating the poor odds, I say go for it – then call me next year.  Seriously, it’s just easier for me to deal with people who have either already given it a shot, or those who just want to get their license back the first time.  I certainly understand the lure of trying something for free, and I’m busy enough as it is, so I really mean it when I say if you think you want to give it a shot, then by all means do so.

I never get involved in administrative appeals.  Over the years, I have been asked to do everything from handle a such a case in its entirety to simply look over someone’s paperwork before they submit it.  I have, on many occasions, been offered my full fee to handle an administrative appeal because the person doing so knows that he or she will still be saving the time and money required for 2 trips back to Michigan.  If you live in Chicago, coming back to Michigan is not such a big deal, but if you’re coming from Hawaii, then cost is an issue (a client of mine did just that a few months ago, and he went home having won his appeal, so he had no regrets).  The reason I won’t touch an administrative review is because, unlike the regular cases I handle, where the client comes to see me before he or she has the substance abuse evaluation completed by my evaluator (to whom he or she will give a marked-up driving record, my completed substance abuse evaluation checklist and any other documents feel are necessary), I am cannot control how things are done.  In other words, a big reason I can guarantee to win every case I take is that I have control over every facet of the case, before even the first step is taken.

I don’t know how many license restoration cases I’ve handled in my career, but it’s probably multiple times more than anyone else (I held 6 hearings the very week this article was written).   In all of those cases, I have only seen a handful (that means 5 or less) of substance abuse evaluations completed by an evaluator, outside the small group whose services I use, that have ever been good enough to file.  And to be clear, in almost every case I handle, I use a single evaluator whose office is a few blocks from mine.  And while that nearby is location is merely a coincidence, it is also a convenience that cannot be overlooked, either.  Indeed, I have full faith in the several other evaluators I use from time to time, but, as it happens, their offices are just not as close to mine.  The larger point, here, though, is that I have only found a very few clinicians who can really do a proper job on a substance abuse evaluation.  That’s not a knock against them; it takes a lot of practice, through trial and error, to get good at this.  The problem is that anyone trying to do an evaluation has no idea what he or she does not know until they find out the hard way, and that’s NO WAY for anyone to try a license appeal, where the rules provide that when you lose, you can’t even try again for another whole year.

For all I could write about this, the thing I bring to the table is that none of this a concern for me precisely because of the way I do license restoration and clearance cases.  When someone wants to go their old therapist for an evaluation, I explain why we won’t be doing that (even though that person may have been a wonderful clinician).  When someone refuses to come to Michigan, then the whole plan to see my evaluator isn’t even a possibility.  And the letters of support are just easier for me to handle for a client who is a “physical” client rather than someone I’ve never actually met or seen before.  The whole idea of an administrative review just presents itself as an endless series of problems I don’t need, especially because, in exchange for the money I charge, I guarantee a winning result.  Thus, for me, the whole thing has no appeal (no pun intended).  Instead of wasting my time trying to talk someone out of winging this on their, own, I just wish them good luck.  Like I said, I’ll be here next year.

Beyond all of this, there is the hearing itself.  Of course, there is no hearing when someone files an administrative review; that’s why it’s called an “appeal-by-mail.”  The problem with that is that no hearing means no chance for the hearing officer who will be deciding your case (think about that – their title is “hearing officer,” not “case officer,” or “administrator” or “decider” or anything else) to ask any questions.  And that’s EXACTLY what hearings are about – asking questions!  Every hearing is an opportunity for the hearing officer to inquire about the evidence, and they always have questions.  Lots of them, in fact.  If you skip the hearing, then you lose to opportunity to explain those things that hearing officer might want to know more about, or otherwise clarify something to him or her.  Remember, the rules require the hearing officer to agree that the person has proven his or her case by “clear and convincing evidence,” a standard I often describe as one where the hearing officer, after the case is presented, will have NO unanswered questions.  In that way, if the hearing officer has even one unanswered concern or question after reading someone’s paperwork, then he or she cannot find the evidence “clear and convincing.”  This helps explain why there is a 75% chance that an appeal-by-mail will lose, and I’ve often wondered, of the 1 out of 4 people who do eventually win, how many times have they tried before?

It’s not only that there is a hearing, but for me, that it is a live hearing.  I have all my cases heard in the Livonia office of hearings and appeals.  As it turns out, there is a Secretary of State office with a video terminal less than 5 minutes from my office, but I will never take that shortcut, and will gladly drive the additional 45 minutes to appear in-person, with my client, so that important things like body language and the subtleties of eye movement and voice inflection can be observed.  The bottom line is that I know how to win, and as long as I have a client who is genuinely sober, I can get rid of the Michigan hold on his or her driving record.

When I handle a case, and in order to win (and guarantee it), the client will come back to Michigan twice: First to see me and then have his or her evaluation completed, and then again, several months later (usually about 5 or so) for the hearing.  Everything else you need to know is laid out in the previous, 2-part article.

If you need a clearance of a Michigan hold on your driving record, do your homework.  Be a savvy consumer.  Read articles like this, and look for real information on legal websites.  Check around, and then call around.  You should feel comfortable to call back and compare notes.  I’m all for that, and encourage it.  As I noted, if you’re inclined to try an administrative review, go for it.  Whatever you do, just don’t sit on it for too long, doing nothing, in what has been called “the paralysis of analysis.”  When you’re ready to talk, you can reach my office Monday through Friday, from 8:30 a.m. until 5:00 p.m. (EST), at 586-465-1980.  I have the friendliest and most helpful staff you’ll find anywhere.  We do all the consultation stuff over the phone, right when you call, and will happy to answer your questions and and explain the process in as much detail as you’d like or need.  We’re here to help.