In part 1 of this article about 3rd offense DUI charges in Michigan, we began by acknowledging the central importance of the evidence, and then, after reviewing the actual OWI law, boiled the relevant parts down into plain English. From there, we briefly looked at the potential driver’s license penalties. Here, in this 2nd part, we’ll see that, while the court process for 3rd offense DUI cases is similar to both 1st and 2nd offense cases, there are some significant differences, as well, beginning at the very first step – the arraignment: 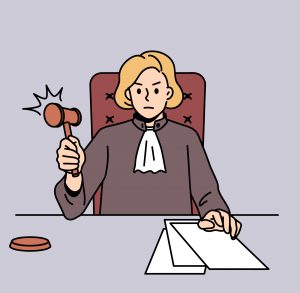 ARRAIGNMENT. At some point, either before, or after a person’s release from jail (after often happens when there has been a blood draw), he or she will be arraigned by either a Judge or a Magistrate. At an arraignment, a person is informed of the exact charge or charges against him or her, the maximum legal penalty that can be imposed for each, and is then apprised of his or her constitutional right, including the right to remain silent and the right to a lawyer By far, the most important purposes of this first hearing is for a bond to be set, and the conditions of that bond to be established.

As far as the money part of bond is concerned, if a person has already posted some to get out of jail, most courts will consider that amount adequate, and let it stand. Usually, the biggest issue to be resolved at arraignment for a 3rd offense DUI are the conditions of bond. For example, it is a standard condition in all 1st and 2nd offense cases that a person completely abstain from the use of alcohol and all other intoxicants (including recreational marijuana), and that he or she provide regular breath and/or urine tests to prove compliance with the court’s “no drinking” order.

This no drinking condition will, of course, be included in the bond for a 3rd offense DUI case, but the testing schedule is also likely to be increased so that there is no “window” of time, at any point, for a person to try and sneak in a drink here or there. By the time a person is facing his or her 3rd DUI charge, it is assumed by everyone that he or she has a drinking problem (we’ll get to to that later in this piece), so one of the court’s primary goals in setting the bond conditions is to separate him or her from alcohol.

Although all felony cases are ultimately decided in the circuit court for the county in which the offense occurred, every one must first start out in the local district court for the earliest proceedings. The final purpose of the arraignment takes us to that next (and final) step in the district court – the probable cause conference:

PROBABLE CAUSE CONFERENCE (PCC) AND PRELIMINARY EXAMINATION (PE). The next court date in a 3rd offense DUI case is really a 2-part deal. The first is for what’s called a “probable cause conference,” or PCC, which must be scheduled no earlier than 7 and no later than 14 days from the date of the arraignment. It is an opportunity for the defense and the prosecution to discuss any possible plea resolution to the case, and go over any other preliminary matters, including whether or not the defendant will actually hold a preliminary examination (more on that shortly).

In many cases, when they meet, the defense and the prosecution can and do agree on certain things, like a plea bargain that reduces the felony 3rd offense charge to a 2nd offense misdemeanor, and/or that the person will apply for admission into sobriety court program. The parties can also agree that certain evidence either is, or is not admissible, and discuss other ways to resolve the case. To really understand the PCC, however, we have to jump ahead for a moment and examine the step after that, called a preliminary examination (PE), and see how it influences the phase (PCC) before it.

Essentially, the preliminary exam is a formal court hearing at which the prosecutor must present testimony to the Judge (the defense can present evidence, but is not required to do so) who then decides if the case is strong enough to send “up” to the circuit court, or if it is so weak that it should be dismissed outright.

Technically speaking, if a defendant demands a preliminary exam, the prosecutor has to prove 2 things to the Judge:

• First, that there is probable cause to believe a crime was committed, and

• Second, that there is probable cause to believe the defendant committed it.

The simple way to understand this is to think of it as the “bull$hit case test.” If the evidence presented by the prosecutor is so lacking that a Judge rolls his or her eyes and thinks, “this is just bull$hit,” then the case will be dismissed.

If the evidence is ANY better than that, then the Judge will send the case (“bind it over”) to the circuit court for further proceedings.

In the real world, a case has be extraordinarily lame for a Judge to dismiss it at the preliminary exam stage. In legal terms, all a Judge has to find is that it is likely that a crime was committed, and that there is a question of fact that the person facing the charge committed it.

The Judge does NOT decide probable guilt, but rather, as noted, merely that there is an honest question of fact that the person did, in fact, commit the charged offense(s).

Finding that there is a mere question of fact is a pretty low bar.

This is why, absent a plea deal at the PCC stage, most preliminary examinations are waived, meaning not held. One key and strategic reason to waive the exam is that any and all testimony given at a preliminary examination in preserved forever, and no lawyer wants anything incriminating like that to be available for use against his or her client until the end of time.

Returning to the probable cause conference, then, one of the other key discussion points there is whether the defendant is actually going to demand and hold his or her exam. Sometimes, there are very good strategic reasons to actually hold an exam that outweigh any risk associated with preserving testimony.

CIRCUIT COURT ARRAIGNMENT. The first thing that happens in any criminal or 3rd offense DUI case that gets sent “up” to the county circuit court is what’s called a circuit court arraignment. This is basically a reading of the charges all over again, like what happened in the district court at the original arraignment.

Usually, the issue of bond is not addressed again, at least as to the amount of money that was posted, although in some cases, the circuit Judge may change some of the alcohol and/or drug testing requirements. This can happen at the request of the prosecutor (who will usually want to make things “tougher,”), the defense lawyer (who will usually want to reduce the burden and/or frequency of such testing), or the Judge him or herself (usually to strengthen the testing requirements).

Often enough, the defense lawyer and the prosecutor will use this first meeting in the circuit court as a chance to discuss a way to resolve the case, even if only briefly.

If there is no plea agreement reached on this date (and there usually isn’t), then the next court date will be set for what’s called a “pre-trial,” and with that, the circuit court arraignment phase is over.

From this point forward, OWI 3rd offense cases proceed very much like 1st and 2nd offense cases, except that the proceedings are held in the county circuit court, rather than the local district court.

PRE-TRIAL. A pre-trial in a 3rd offense DUI case is really any meeting involving both the prosecutor and the defense lawyer held after the circuit court arraignment, but before an actual trial. Most of the time, there are several (if not numerous) pre-trial conferences. The main purpose of the pre-trial is to bring the prosecution and defense together in order to discuss ways to resolve the case without the need for an actual trial.

Usually, these discussions center around plea bargains and/or sentence bargains. For example, my team and I have handled plenty of cases where a 3rd offense felony DUI charge was negotiated down to a 2nd offense misdemeanor after it had been bound over to circuit court, and/or in which our client was admitted into a sobriety court or adult treatment court program.

In the real world, the overwhelming majority of DUI cases are resolved as the result of pre-trial negotiations, through some kind of plea or sentencing arrangement.

In those very few cases where there is no agreement upon a way to resolve a DUI charge, then the case will ultimately be decided at trial.

We’ll stop here for now, and resume in part 3 by looking at the trial stage, which happens if a case cannot be resolved through pre-trial negotiations, and we’ll continue from there into the final court phases of a 3rd offense DUI case.