In part 4 of this article about 3rd offense DUI cases in Michigan, we briefly looked at the role of evidence. In particular, we saw how a lawyer can make things worse by not looking at the big picture before plowing forward and trying to fight a DUI charge without an intelligent plan. We then noted that anyone charged with a 3rd offense drunk driving is going to be perceived as having a drinking problem, and even if he or she disagrees with that, this is the time to shut up and not argue that point, because that will only make the person’s situation worse. 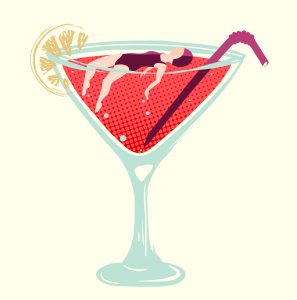 Years ago, because the work of our firm is concentrated specifically in DUI and driver’s license restoration cases (which are a direct result of having racked up multiple DUI’s), I realized how beneficial it would be for me to expand my understanding of alcohol and addiction problems. Although my team and I spend all day, every day, working with alcohol and drug-related issues, I wanted to learn the clinical side of things, as well and recognized the value of being able to see the whole picture, and not limit my knowledge only to the things at issue in DUI and driver’s license restoration cases.

To do that, I went back, in-person, to the University classroom and completed a formal post-graduate program of addiction studies (before I got my law degree, I earned my undergraduate degree in psychology, so this really was an extension of that). Although some what I heard confirmed things I already knew through our firm’s work, the program really broadened my grasp of how alcohol and substance abuse problems develop, and how they are diagnosed and treated, as well as the many ways people can and do recover from them.

One thing that didn’t surprise me was that it is accepted as fact that a person can’t be made to quit drinking or get sober for any reason other than because he or she wants to. The real catalyst to someone getting sober is that he or she has simply had enough of the problems caused by his or her alcohol use.

On the one hand, nobody quits drinking because it’s working out so well. On the other hand, there are plenty of people who rack up 3, 4, or even more DUI’s and just keep going. In fact, during the writing of this article, an email came in from a person facing his 5th DUI charge. Hopefully, this will be his last, but who knows…

One encouraging thing my team and I see all the time is that a person may have attended counseling or AA in the past, but for whatever reason, at the time, wasn’t ready to quit drinking. Sometimes, though, it can just be one thing heard at some point that just sticks with them, and then, at some point down the road, whether months or even years later, that message will finally resonate, and they’ll have their “a-ha” moment, throw in the towel, and quit drinking.

Often enough, it’s getting arrested again that is the reason for that message to finally hit home.

This begs the question – if a person still isn’t ready to quit drinking for him or her self, then we have to ask, is “more” really better?

On the flip side, though, isn’t it worth the chance that the person may be ready, or close enough to becoming ready to quit drinking, and might just need a little “push,” or otherwise might just hear that one thing, this time, that finally does tip the scales in favor of him or her deciding to get sober (even if that happens in the future)?

With the exception of sobriety and other problem-solving courts (more on that later), and other specialized treatment courts, the legal system is really not equipped to do much more than conclude a person has a drinking problem and then order him or her to get treatment for it.

Although they usually mean well, the Judges and probation officers who facilitate all of this are not clinicians. In fact, one could argue that in any 2nd or 3rd offense case, they only have contact with people who go through treatment and DON’T get better, so their perspectives on recovery are categorically limited.

Moreover, the court system doesn’t have any way to assess what counseling or treatment programs are better than others, and really has no clue about ordering a person into the kind of counseling or treatment that is good fit for him or her. As a result, it’s total gamble for someone dealing with a 3rd offense DUI to just wait, and  let the court decide what “help” to order for him or her.

This is why being proactive is such a key part of an intelligent defense strategy, because if a person undertakes some kind of counseling or treatment that IS a good fit for him or her at the outset, there is a good chance that the Judge will let him or her continue with it, rather than send him or her off to whatever program it normally uses for 3rd offenders.

Because this is so important, my team and I work closely with our clients on this and help them connect with a program that will work for them, and will also work for the court, as well.

In some 3rd offense cases, we can get our clients into a sobriety court program. These programs offer lots of benefits, including thousands of dollars worth of rehabilitative services, either for free, or for a nominal cost.

In addition, a sobriety court Judge is authorized by law to override the Michigan Secretary of State’s mandatory revocation of a person’s driver’s license for multiple DUI’s,  and grant him or her restricted driving privileges.

That alone is huge, as in super-huge.

Sobriety courts offer intense treatment and the benefit of still being able to drive legally, but in exchange for that, a person agrees to follow very specific rules that include no drinking or using drugs, frequent testing, and guaranteed and graduated jail stints for any violations, culminating in getting kicked out (in most programs, after a 3rd positive and/or missed test, a person will be removed from the program and lost his or her restricted license) to face sentencing all over again for his or her DUI offense.

In some cases, we get our client’s into sobriety court by first obtaining a plea-bargain from a 3rd offense felony to a 2nd offense misdemeanor charge, and then having him or her admitted to one of these programs run by a local district court.

In plenty of such cases, we have been able to secure a transfer of the case from one court to another, and have even done this across county lines, so there are numerous ways this can be done.

Sometimes, however, a person’s only option will be to attend a program run in the circuit court, but admission there means often means that there will have been no plea-bargain from the felony, 3rd offense DUI to a 2nd offense misdemeanor DUI, something that’s usually preferable.

Even if sobriety court is an option, a person has to want to undergo the treatment offered by such a program, and the people who run them carefully screen every potential candidate to make sure that he or she not only meets the requirements for admission, but is genuinely interested in the kind of help that is available.

Whatever else, a sobriety court program is not a tool someone can use to soften the impact of a 3rd offense DUI.

There is a lot to the whole subject sobriety courts, and the reader would be well advised to read the linked articles, because even the most cursory treatment of them, and how they work locally (every municipality is different, and so is every county), can get so deep that no article, nor even serious of articles, can do them justice.

Accordingly, this is an issue best addressed in consultation between the lawyer and the client, taking into account his or her inclination (or lack thereof) to complete one of these programs, as well as the options available, which is in large part dictated by location of the particular sobriety court.

We’ll stop here for now, and come back, in part 6, to finish our overview of 3rd Offense DUI cases in Michigan, and start by looking at what is often the biggest concern for anyone in this situation – Jail.