As Michigan DUI lawyers, my team and I fight hard for our clients in order to get the best outcome in every case we take. Fighting for a client is what a lawyer is paid to do, but in many ways, the idea of what it means to “fight” has lost its real meaning. The goal of any fight should be to win in some way, and not just fight for the sake of fighting (and getting paid for it). Unfortunately, there are too many legal marketing messages that try to make it sound like the more one fights, the more successful he or she can be, and that anything else is not enough. That’s misguided. 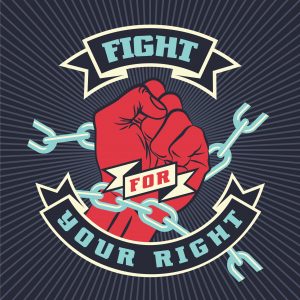 If by “fighting,” someone means NOT rolling over and NOT being spineless, then that’s correct. Unfortunately, for as many lawyers as there are who will charge endless fees to fight everything they can, there are plenty of others who are very much the opposite, and will plead out just about every case they get. Such lawyers “sell out” their clients just as much as the “fight everything” operations fleece theirs. When you think about it logically, it’s obvious that neither choice, by itself, is the right one, and that the best approach is a kind of compromise, falling somewhere in the middle.

In other words, there is almost never any reason to fight everything, nor is there usually any reason to NOT at least fight some things. The notion that one is better served by challenging everything about a DUI charge is so completely wrong it’s hard to know where to begin to explain why. One thing everyone can relate to is cost, but in the context of a DUI case, we’re also talking about the cost of an opportunity. As much as it’s wrong for any lawyer to run headlong into a case merely looking for a plea as a way out, it’s also wrong to be hard-headed and un into the case and squander a chance to produce a better result, just for the sake of fighting.

Let’s back up a bit, though, and first give some due credit to the whole “fight” philosophy. If any DUI lawyer seems like he or she is only interested in taking whatever plea is offered, then that’s all he or she will ever get. There are really 2 truths at play here:

1. DUI cases don’t dismiss themselves, and

2. Judges and prosecutors don’t dismiss DUI cases unless they have no other choice.

If, by contrast, a lawyer merely reviews the evidence, then in lieu of doing a thorough examination of it, he or she will essentially be waiting (and hoping) for something to “jump out” at him or her. As DUI cases go, that’s a losing proposition (technically, there is no “DUI” in Michigan, as the legal term is Operating While Intoxicated, or “OWI,” but we’ll stick with “DUI” since that’s the term everyone uses).

Unfortunately, there are lawyers who wind up pleading out every, or almost ever DUI case they get. The pejorative term for that kind of practice is “bleed ‘em and plead ‘em,” and that’s an ugly habit for any attorney to fall into.

On the flip side, however, the practice of challenging everything as a kind of “shotgun” approach is not any better. When a lawyer tests a Judge’s patience by making ridiculous challenges to every last bit of the evidence, including those things that are beyond any honest debate, he or she will lose the Judge’s attention, and in doing so, may actually cause a legitimate challenge to be overlooked simply because that attorney has caused everyone to NOT take him or her seriously.

Unfortunately, there are lawyers like that, and more than one might imagine. If you, the reader have spent any time online, then you probably stumbled across some of their websites. To be sure, they make a lot of money, but their financial success in the office won’t necessarily translate into your case success in court, where it counts.

Rather than sell out every client for a quick buck, or charge every client to fight every last thing, a lawyer should carefully examine the evidence and make strategic challenges that can make a difference in the case, and improve the result.

Of course, the ultimate prize is to find something “big” enough that, if successfully challenged, causes the whole case to collapse. However, even if there isn’t anything wrong with the evidence significant enough to get a case completely tossed out of court, there are still plenty of other things that can be found and used to at least drive a better deal than would otherwise be possible if a lawyer didn’t dig hard enough.

These are the kinds of issues that only come about as a result of a proper and thorough examination of all the evidence, but once found, they need to be isolated, and then properly raised. A lawyer can pretty much “challenge” or “fight” anything, in any kind of case, but that’s nothing more than a dog-and-pony show that runs up the bill, wastes everyone’s time, and ultimately accomplishes nothing useful.

A person can, for example, file a court case to challenge his or her taxes, and can even challenge the constitutionality of the tax laws. It’s very conceivable that someone could spend tens, if not hundreds of thousands of dollars “fighting” his or her tax liability, but the real question is whether or not any of that is going to pan out.

Here’s a true story. I don’t remember exactly when it happened, but it was before I began this blog, which I’ve had for over 12 years, as of this writing.

I was in circuit court for an implied consent driver’s license appeal one day. Those are done as part of the call for civil cases, rather than on the criminal docket. A then well-known (and now retired) criminal lawyer came in and sat next to me. Curious as to why he was there on a day when only civil cases were being heard, I asked him.

He explained that he routinely filed evidentiary motions in his cases (in the county where I encountered him, such motions were also scheduled on the same day civil cases were heard) because he could easily get 2 or 3 of them heard in the morning, and, at about $1000 each (back then), he could rack up another $10,000 or more a month in earnings.

The real question, though, is would you do it if you knew, that, by and large, you were screwing someone, and doing unnecessary work?

Okay, I’ll admit that, at first, I was a bit jealous. There I was, plodding away, and this guy was taking in the money hand over fist.

However, the fact is, that’s just not how I have ever done things, nor how me or anyone on our team do things now. We’re honest people, and would rather be known as trustworthy over anything else. Probably because we all came from working or middle-class backgrounds, we are instinctively cost-conscious, as well.

Many many years ago, just after my wife and I bought our first home, the furnace stopped working one cold Saturday night. I had no idea what to do, so I called a hearing and cooling company, and a few minutes later, a guy called me back. I could tell from the background noise that he was bowling, and, as the conversation would soon make clear, this was his night out.

I explained that my furnace would click “on,” but then not fire up. He told me it was most likely an easy fix, and that the flame sensor had probably become encrusted with crud, and that a quick swipe with some sandpaper would fix it. He offered to walk me through it over the phone, but I had grown up in the city with a very different kind of furnace, and didn’t want to screw around (or screw things up), so I declined the “do-it-yourself” fix and agreed to pay whatever he had to charge me for coming out.

The guy came over, and was as nice as pie (especially considering that I had probably ruined his Saturday night). He had me follow him into the basement and proceeded to show me that, in fact, the flame sensor had become corroded, and then showed me how to fix the problem when it happened again, because, as he made clear, it would happen again (and it did, but I was ready by then).

That kind of honesty made a strong impression on me, and his company became the ONLY heating and cooling company we used over the next 20 or so years, until we finally built a new house.

That’s how my our firm operates.

We don’t “fleece” anyone.

By the same token, we don’t ignore anything that should be challenged, and we work hard to bring about the best results in every DUI case we take.

To be sure, I’d love to rake in the money like some of the “we fight everything” operations, but in addition to that being contrary to our collective conscience, my team and I would also lose the respect of the Judges and prosecutors before whom we practice.

When we challenge something in court, nobody ever wonders if it’s just BS, or rolls their eyes because we’re running up a bill and wasting time. Instead, we’re taken seriously.

As it turns out, we win most of our challenges precisely because we try to limit them to things that can be won.

For everything we’ve just covered, the grand takeaway here is simple: You, the reader, need to be a sharp consumer as you look around for a Michigan DUI lawyer. Although it’s easy to be drawn to what you want to hear, you should also pay attention to what you need to hear. It may not be as sexy or appealing, but all the self-praise and self-promotion found on some websites can easily amount to nothing more than empty promises – and an empty wallet.

Part and parcel of our firm’s sales pitch is that anyone looking to hire an attorney should take his or her time and do some comparison shopping. That’s important, and although few, if any other lawyers encourage anyone to do that, it’s such simple common sense that there is no need to explain why anyone should.

While reading websites and blog articles is important, one should also try and read between the lines, so to speak. If a person spends a little time looking past the hype, there’s a lot to be discovered, even if it’s found within the things that aren’t said.

If you’re facing a Michigan DUI charge and looking for a lawyer, be a smart consumer and do your homework. Read around, and see how different lawyer explain the DUI laws and process, and how they explain their various approaches to it. When you’ve done enough of that, start checking around.

You can learn a lot by actually speaking to a live person. If your case is here, in the Greater-Detroit area, meaning anywhere in Wayne, Oakland, Macomb, Lapeer, Livingston, St. Clair or Washtenaw County, give us a ring, as well.