This will be a 2-part article examining the realities of using an ignition interlock unit. In Michigan, an interlock is legally required in several circumstances: when a person wins a driver’s license restoration case, as a condition of a sobriety court issued license, after a conviction for OWI with a High BAC, and any time a Judge orders it as a condition of probation. This installment will not be a technical nerd-fest, but rather a plain-spoken discussion about the interlock, how you get it, how you use it, as well as some of the more common problems people run into, how to avoid them, and what to do if you can’t. 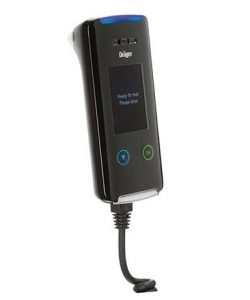 The most obvious purpose for an ignition interlock unit (sometimes colloquially called a “blow-and-go”) is to prevent someone from driving drunk. That’s easy enough to understand, but in the real world, the State of Michigan uses it to prevent a person from even getting the car started with a breath alcohol content higher than .025, a level far below what’s considered “drunk.” The idea is that anyone required to use an interlock is almost certainly someone who shouldn’t be be consuming alcohol in the first place, so anything beyond a nominal BAC reading is enough to keep the vehicle from going anywhere.

Another real-world use of the interlock is to record a person’s breath alcohol level and make sure that he or she isn’t drinking at any time, not just to prevent the car from being driven by someone whose BAC is above .25. To win a driver’s license restoration case, for example, you have to prove that you’ve quit drinking entirely and are a safe bet to never drink again. Thus, any alcohol showing up in a person’s breath is a problem. The reader may be surprised to discover how many people test “positive” in the morning, after drinking the night before, having miscalculated that the alcohol would be out of their system by the time they’d have to provide a breath sample. But there are other applications for it, as well.

In all driver’s license appeal and certain DUI cases, use of an interlock is required. The law mandates its use when a person has been convicted of a High BAC OWI offense, or when a restricted license is granted through a sobriety court. An interlock can even be ordered by a Judge as a condition of probation in a DUI case. Of course, it is always a condition of probation for a DUI that a person not consume any alcohol, and usually a condition that he or she test periodically to prove compliance with the “no drinking” order, as well.

If a person must have an interlock, then instead of making him or her to go to a facility and provide a urine or breath sample (or use a “Soberlink” cellular breath testing device), a Judge can simply order that the person test using the interlock machine in their vehicle, even when not driving, because every sample is recorded.

Thus, the interlock machine serves several purposes: it prevents anyone from driving drunk (essentially by not allowing the car to start if a person provides a breath sample with an alcohol content higher than .25), and it allows both the Secretary of State and/or a court to monitor whether a person is drinking at all, much less drinking enough to “fail” and not be able to drive.

There are a 6 interlock manufacturers that have been approved by the Michigan Secretary of State. If a person wins a driver’s license restoration appeal, he or she is free to choose any of them. By contrast, some courts, when ordering an interlock as part of a sobriety court license or as a condition of probation, may mandate the use of just one, or any of a select few, of these providers.

These 6 manufacturer’s products are installed and maintained by outside contractors (often with different names; Draeger, for example, is distributed in Michigan by Nationwide Interlock). Michigan law requires that every interlock provider must either have a location within 50 miles of any point in the state, or otherwise have a mobile unit that can come to any such location and install and maintain its devices.

There are costs to install, rent and maintain an interlock, but I have never involve myself in discussions about this aspect, lest I get drawn into something that falls way outside the scope of my practice. The best I can say about the money thing is that it is what it is.

If you are ordered or required to have an interlock, you will have go to one of provider’s for the 6 manufacturers to get it installed. Each of these manufacturers retails its products through different places, like vehicle repair facilities, alarm system installers, auto detailing locations, and the like. This means that even if you live in BFE (that’s slang for “the middle of nowhere”), there will almost certainly be a service center near you, even though you may never suspect it, because it might operate out of a place like “Shorty’s Auto Glass” or something like that.

To clarify what I mean, let’s use a hypothetical example with made-up names. Assume that someone picks a manufacturer named Acme Breathalzyer Corporation (ABC), and the local installer is 123 Car Alarms and Sound Systems (123). A person may not pick ABC interlocks as nearly much as deciding to get the interlock at 123 because 123 is the closest place to his or her home that does installation and maintenance (or can get someone out to do the job the soonest). In fact, the person probably doesn’t care a lot about what brand of interlock 123 uses as much as the fact that it’s the most convenient option.

This is kind of similar to when you need a new water heater in your house. Most people don’t look for a particular brand of water heater, but rather for a local company that sells and installs them. Thus, if your hot water goes out in the morning, you want a new one put in ASAP, and if Pete’s Plumbing can get to your house today, while no other company can get there until tomorrow, then you’ll almost certainly be installing whatever brand Pete uses.

It’s the same for interlock units.

As much as it’s hard to explain this in a way that makes sense now, when you are required to drive with an interlock, you won’t have any trouble finding a provider. Often enough, it’s not finding a place close by that’s the problem, but picking one amongst them all, because no matter where you live, you’ll usually have several choices relatively close In more urban areas, these places are all over. In the Detroit-area, for example, Nationwide Interlock has at least 4 places that install and service their units.

You can kind of think of interlock companies the way you think of cable companies, or cell phone providers; they all do essentially the same thing, but some are simply better than others. Although I am not an endorser for any company, it has been my consistent experience that Nationwide Interlock (Draeger) does go the “extra mile” for its clients. While I can’t say much bad about the others, if I had to get an interlock unit installed in my vehicle, Nationwide would be my first choice.

For everything there is to ignition interlock devices, it really is as simple as getting a unit installed, using it to start your car, and then blowing into it when prompted to provide a breath sample while driving. As long as you don’t consume alcohol and mind a few other simple details, everything will, for the most part, be just fine.

We’ll stop here for now, and pick up again in part 2, focusing on how the interlock works, what can go wrong when using it, and what to do when that happens.