The Michigan Secretary of State (SOS) specifically provides a notice of proper ignition interlock use within every winning order it issues granting a driver’s license restoration case. These directions detail what a person should and should not do to avoid any interlock problems in the first place, as well as the steps to follow if (in the real world, this is more like “when”) some difficulty arises. Unfortunately, problems do occur rather often, and many people make things worse by calling and relying on their interlock company for guidance. 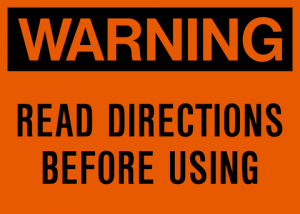 Of course, it seems natural to reach out to the interlock company if there’s any kind of issue, or something goes wrong while using the device. While this is an understandable reaction, it’s also exactly what one shouldn’t do, and the point I want to make in this article is that no matter what the situation, the Secretary of State’s instructions reign supreme, and that not following them – no matter who suggests differently – only complicates things.

As Michigan driver’s license restoration lawyers, my team and I regularly handle interlock violations, including the kinds of problems most other lawyers will never see in an entire career. We’re certainly as close to having “seen it all” as possible, and that means we frequently see the same mistakes being made over and over again. Although we consider it part and parcel of our services to help our clients after we’ve won their license appeals, this kind of assistance isn’t offered by every other lawyer, and as I noted above, no matter who the lawyer may be it’s a nearly instinctive reaction to call the interlock company first, as soon as something goes amiss.

As a result, my team and I wind up representing a lot of people in ignition interlock violation cases who were not our clients to begin with. Although we handle a lot of violations every year, it is always our goal to help somebody avoid one in the first place, if that’s possible, and that’s the real motivation for this article.

If the reader takes one thing from this article, it’s that the Secretary of State’s notice of proper interlock use is the absolute BIBLE in terms of how to avoid problems in the first place. It outlines the things a person should not do when using the device, as well as what a person should do if (or, as I noted early, more likely when) things do go wrong. The state’s directions are controlling, and there is nothing you can find anywhere that is more important than the very words of the Michigan Secretary of State.

But even this needs some explaining, because the Secretary of State’s notice contains one of the biggest and most misleading understatements to be found anywhere. Specifically, every winning order states that “With an alcohol reading on your interlock device or other violation such as missed rolling retest or power losses, it is also advisable that you obtain an objective test to prove you were not drinking.” The bold emphasis is the state’s, not mine, but that’s about as far as it goes in trying to emphasize the importance of this instruction.

The simple fact of that matter is that if a person misses or fails a breath test, he or she is EXPECTED to go and get either a PBT (breath) or EtG (urine) test to show that he or she wasn’t drinking.

The word “advisable” is a complete misnomer, and that sentence in the order should be revised to read “With an alcohol reading on your interlock device or other violation such as missed rolling retest or power losses, you will be expected to obtain and produce an objective test to prove you were not drinking.”

Before I go off too far into the weeds here, let me bring this back to the main point: calling the interlock company may seem like the right thing to do, but the only useful thing they can do in almost every instance is to advise the caller to carefully read the state’s instructions, particularly about getting a PBT or EtG test.

Unfortunately, it has been our rather consistent experience that interlock companies often provide bad and even wrong advice, and frequently make things worse, rather than better.

A notable exception to this is Nationwide Interlock. Although I don’t mean to suggest that all the other companies are substandard, Nationwide consistently goes the extra mile for its clients, and has long been our first choice for our clients.  This is not a “plug,” but rather an honest assessment. I have no arrangement with Nationwide, and receive no compensation from them; we just want the best for our clients, and nobody does a better job than them.

Now, let me give 2 examples of what I mean by the interlock company making things worse:

1. We have seen loads of cases where a person has had some kind of problem with the unit, called their interlock company, and been told to unplug the device, then plug it back in. You simply cannot do that. There is a protocol to follow so that even a momentary power loss doesn’t wind up as a violation (ANY disconnection of power from the unit is treated as a violation called a “tamper/circumvent”), and, unless followed, IT WILL.

2. We have also seen numerous cases wherein a person who had NOT been drinking nevertheless tested positive for alcohol on the machine (including startup failures), and, worried about what to do, called the interlock company. More people than I could ever count have been told that as long as they managed to get the vehicle started they should be fine. This is also totally wrong.

The notice of proper interlock states that anytime a person misses a test, or otherwise provides a positive breath sample, “it is advisable” that he or she obtain an independent EtG or PBT test. As I pointed out, this instruction should be revised from “advisable” to “expected,” because the Secretary of State hearing officers are going to EXPECT such a test result to be produced.

The larger point, though, is that the best and ONLY thing an interlock company can do if someone calls in a panic after a missed or failed test is advise him or her to go get an independent test.

Nothing else matters, and any advice that doesn’t make this clear is simply not helpful

Some years ago, I was in a violation hearing and my client tried to explain why he did not get either an EtG or PBT test after any of his start-up test failures. Although I won the hearing, the hearing officer (now-retired), asked my client whose directions he thought he should follow regarding any interlock problems: the entity that gave him the license in the first place (meaning the Secretary of State), or someone else’s?

That was then. In the intervening years, the Secretary of State has become much tougher on violations, and that’s why I say, and very much mean, that it is now expected that a person will obtain an independent EtG or PBT test following any missed or failed interlock breath test.

When someone hires us as their driver’s license restoration lawyers, we consider it part of our ongoing services to help them if they have any issues on the interlock. There have been plenty of times when, by early intervention, we’ve been able to head-off something like a “tamper/circumvent” violation when there has been a power failure. Moreover, I’ve replied to many clients on Saturdays and Sunday when they’ve sent a frantic email about a failed or missed interlock test.

In almost all of the missed or failed test cases, though, I’ve simply reminded the client to hurry up and either get a timely PBT breath test (it’s really not worth anything if it isn’t taken within an hour of the missed or failed test) or otherwise go that same day and get an EtG urine test. Of course, we follow up with the client and get a copy of the results to have for a violation hearing, if any, or to be presented when they eventually do go back for a hearing to get their full license.

The bottom line here is that if you run into any problems and call your interlock company, and no matter what you are told, you should 100% ALWAYS follow the Secretary of State’s instructions, as well.

Also, there is NEVER a reason to NOT get an independent EtG or PBT test following a missed or failed interlock breath test. EVER.

In addition, even if the interlock company says they’ll “handle” something like a power failure for you, you should always follow up with your own lawyer, just to be safe. This is always free to our clients.

It is, admittedly, unfortunate that an article like this is necessary, but, as the old saying goes, “it is what it is.” And to be sure, the interlock companies aren’t the only ones who get it wrong.

There have been cases where people who have had their license returned after a violation hearing have gone to a Secretary of State branch office to have it reissued, only to be told they didn’t need a “new” one, and that they were okay to drive.

They were not, and the failure to issue a new paper license kept them in revoked status, and prevented them from counting the time they drove thereafter toward their minimum year on the restricted.

That same, now-retired hearing officer I mentioned above became so frustrated at this wrong advice given by those branch employees that in her orders reinstating a person’s license after a violation, she would include a separate paragraph, in bold writing, that instructed the person to that they had to obtain a new paper license, no matter what a branch employee told them to the contrary.

The wisdom of her words ring true yet again: who are you going to listen to, the people that granted your license (meaning the hearing officer), or someone else?

If you are facing any kind of interlock violation, need to win your license back or obtain the clearance of a Michigan hold (revocation) on your driving record and looking to hire a lawyer, do your homework. Read around. Read how lawyers explain the license restoration and violation processes, and how they explain themselves.