This is the third article in a loosely-related series about the Michigan driver’s license restoration process.  It is a bit longer than the previous 2 installments, and will therefore be divided into 2 parts.  In the first article, we began by examining the standard of proof required to win a restoration or clearance appeal, and then, in the second article, followed up by surveying the role the hearing officer plays in the license reinstatement process, and how he or she must apply the standard of proof to the evidence presented to decide whether someone wins or not.  Here, we’ll conclude by looking at ignition interlock violations brought by the Michigan Secretary of State’s Administrative Hearing Section (AHS) after someone has won back his or her license.  The sheer number of these violations has grown so much in recent years that I probably have at least 1 or 2 on my schedule every week.  The reason I have included this topic in this trilogy is that being familiar with both the standard of proof that’s applied in deciding violation cases (which is different from the standard of proof used to decide whether to grant a license or not in the first place), and the hearing officer who decides it are critically important components to success.  As with each of the previous articles, this one stands on it’s own, but really comes to life when read in combination with the others. 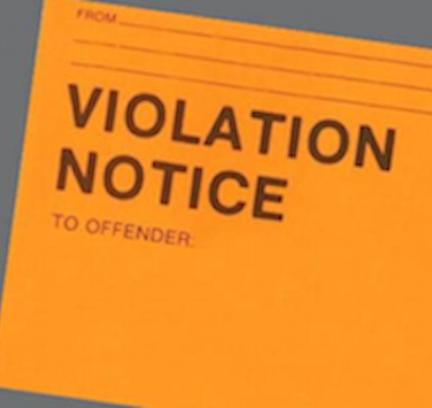 There is no diplomatic way to put this other than to just candidly say that ignition interlock violations suck royally.  By the time you officially learn you have one, it comes in a notice from the Secretary of State informing you that, in a few days, your license will be revoked all over again, and the only thing you can do about it is to file an request within 14 days for a hearing to challenge the re-revocation (technically called a “reinstatement of original action”) or your license will stay revoked.  There is no way to head off a violation or the upcoming revocation once the notice arrives in the mail, meaning that you will be unable to drive for a while no matter what you do.  Here, it is necessary to understand the different burden of proof used in violation cases and how the hearing officer applies it.  While it goes without saying that anyone being violated is not happy, it does no good to be angry with the hearing officer, because it is not him or her who “violates” anyone.  Instead, the the hearing officers are assigned, at random, to decide violation cases within the framework of the AHS rules by applying the relevant standard of evidence.

To the extent possible, I always try to avoid using legalese (which I often describe as “legal mumbo-jumbo”), so my reference to the “relevant standard of evidence” in the last paragraph is rather deliberate.  In the first article, we made clear that to win a license appeal, you must prove your case by what is called “clear and convincing evidence.”  If there is any good news within the context of ignition interlock violation cases, it’s that they are decided using a lower standard of proof, known as “preponderance of the evidence.”  At its simplest, preponderance of the evidence simply means tipping the scales beyond even, in one direction or another.  “Clear and convincing evidence” is a much higher standard than “preponderance of the evidence,” but that alone doesn’t make winning a violation hearing easy.  As we’ll see, when you walk into a violation hearing, it’s not like the imaginary scales of justice are sitting evenly lined up, and all you need to do is add just a little evidence to tip them in your favor.  Instead, because of the allegation that you either failed or missed a rolling retest, had 3 positive-for-alcohol startup failures within a download period, or otherwise did something to tamper or circumvent the interlock unit, the scales are already tipped way against you (to a greater or lesser degree, depending on the allegations) and your job is to tip them back to the even point, and then just a bit more, in your favor.  Let’s see how all this works…

To begin, you need to understand how an interlock violation starts.  The state receives notice from the interlock company that you either failed or missed a rolling retest, had a tamper/circumvent incident, or has 3 start-up failures within a single download period and that triggers the violation.  It’s not like the interlock company calls the state and says, “Hey, we think Lisa has been drinking” or anything like that.  And it’s not like the state receives this data and does any investigation; that’s what the hearing is for.  The interlock company simply dumps the data from your machine to the state, and whatever is in there is in there.  For example, there is supposed to be a way to have repair work done on your car so that a violation is avoided, but all too often, the repair facility screws things up and the driver winds up violated for someone else’s mistake because the machine was going off and no one blew into it while the car was up on a hoist.  While I could go on about this, the subject of this article is how violation is decided at a hearing after it occurs, not how to avoid a violation in the first place (a subject about which I’ve already written).  When the state receives notice of something that constitutes a violation, they go ahead and issue the violation notice.  As I noted, there is no inquiry into what did or did not happen, and this is why I said early on that there is no way to “head off” a violation once you get the notice.  If the state receives data that your unit was disconnected for even a single second, or that you missed a test, then it issues a violation notice that gives the date your license will be revoked all over again.  All you can do is request a hearing in order to show up and present evidence so that you can get your license back (again).

The fact that the state re-revokes your license when it receives data that indicates a violation occurred means that there is a presumption that you committed it.  In the real world, that often works out to be unfair, but if you simmer down long enough to think about it, it does make some sense.  When the data from your unit indicates that you missed a rolling retest, whatever the explanation, it’s probably a safe bet that you did not, in fact, provide the requested sample.  In other words, you could have run out of the car to rescue a baby from a burning building (a good reason, if you have it,) but even if you did, it’s still not like you actually blew into the machine, it took your sample, but then reported otherwise.  Ditto for a positive for alcohol violation.  Whatever the story (“I was eating a piece of pizza”), it’s not like these machines, with any regularity, detect alcohol that isn’t there.  Here’s where things become a bucket of suck:  For all the honest people out there with good excuses for an alleged violation, plenty of people do screw up with the interlock because they have been drinking.

To the state, the stakes are too high to take any chances.  Back in the old days, if you were suspected of violating on your interlock, you’d be give an hearing date automatically and informed that unless you show up and explain yourself adequately, you would lose your license (again).  Now, you lose your license up front and are informed that if you want it back, you need to request a hearing, show up on the date given, and then explain yourself adequately.  The state feels that, given the number of people who do go back to drinking, it’s better to pull the plug on the license right from the start and then give it back later rather than to allow some risky drinker to keep driving until the facts can be sorted out.  For those who have an honest explanation, this is a nightmare, but you can’t argue with the safety issue, and having to go through all of this stuff is just part of the price one pays for winding up in this position in the first place.  Of course, I prefer the way it used to be done, but then again, the overwhelming majority of my clients are people who, despite any violation, were not drinking, so almost every one of my violation hearings ends with a win as experience is another important key to winning.

Here’s where the burden of proof comes into play.  In the first place, the very words “burden of proof” means that you have to prove something.  Consider this very realistic scenario:  The interlock reports that on such-and-such a date back in 2015, before the requirement for camera-equipped interlock units, you provided positive for alcohol rolling retest results (.03) at 11:58 a.m., and then tested positive again (.01) at 12:01 p.m.  At 12:04 p.m., you shut the car off and did not start it back up again until 4:12 p.m. (at which time the reading was .000).  The evidence from the interlock is clear that you tested positive for alcohol.  Meeting your burden of proof means that you present enough evidence to explain and outweigh that positive result.  You do not meet your burden by sitting there and, when asked about what happened, saying, “I don’t know.”  There is a notice of interlock use that comes with every order granting a restricted license, and it very clearly states that a person should obtain a PBT or EtG test after any positive result.  No matter how innocent a person may be, meeting any burden of proof means actually presenting some proof.  A confused look and an “I dunno” is not proof of any kind.

And it gets a bit worse before it gets any better.  How all of this in interpreted depends in large part on the particular hearing officer assigned to decide your violation hearing.  One hearing officer may hold hard and fast to the rules and uphold the violation in the scenario set forth above, while another might look past that and accept an explanation that makes sense even though any hard “proof” to the contrary is lacking.  In the scenario above, imagine if the person testified that he or she had left work to go pick up lunch (a small pizza and a salad), had provided all negative samples from the moment he or she got into the car, and then, on the way back and just too hungry to wait, grabbed a slice of pizza from box and started eating it just before pulling into his or her parking space at work.  Presented properly, that may work with one hearing officer, but not fly with another.  This is kind of how we tie in the previous 2 articles in with this one.  And even though that explanation doesn’t fly with one hearing officer, that explanation itself is still “evidence,”  although not really hard evidence.  Do you see how even a crappy explanation is evidence, whereas the blank stare and the “I dunno” response is not?

We’ll stop here for now, and come back in part 2 to see how this plays out in the 3 very real world situations involving failed or missed rolling retests, start-up failures, and tamper/circumvent violations.