In the world of Michigan DUI and driver’s license restoration cases, this blog is the biggest ongoing resource to be found anywhere. Recently, while trying to do some online legal research, I discovered that a lot of the articles I put up here get “borrowed,” and a sort of cannibalized version of many of them can be found in other places. For as much “borrowing” as has been done from my articles, I know that nobody is going to copy any part of this article covering some largely and otherwise ignored truths about DUI and driver’s license restoration cases. 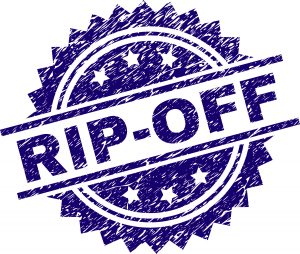 It is said that “imitation is the sincerest form of flattery,” so I’m kind of flattered, in a sense, that other lawyers use my blog posts for their ideas. However, I do put a lot of effort into the analysis that goes into some of these installments, and I wonder if I should be mad at the fact that most of the copy-cat versions that I ran across edited much of that out, and thereby really amount to little more than “cheap knock-off” versions, or whether I’d be even madder if someone did try to pass off my analysis and reasoning as his or her own.

To be sure, nobody can claim any kind of copyright or proprietary interest in legal strategy, but it is kind of mind-blowing to find one’s own ideas put on another person’s blog, or site, as if it’s that person’s original thought. For example, I have put up quite a few articles that were “numbered,” in the sense that they would have titles like, “4 things to look out for….” or “The top 3 things…” and then get into an enumerated discussion of that topic. Imagine my surprise to find quite a few reconstituted versions of those pieces on other blogs and sites.

Of course, I also see plenty of other articles online about subjects I would never write about, but then again, our firm concentrates in DUI and driver’s license restoration cases, so I don’t bother writing anything about home invasion, murder, rape or retail fraud cases.

One thing I can say with absolute, 100% certainty is that I have NEVER looked to any other lawyer’s site or blog for inspiration, and none of my articles have ever followed anything posted by someone else. I write exclusively from the experiences of our firm, and the interactions we have with our clients and the court system

For all the knock-off versions of my stuff that’s out there, however, I have never seen anyone bother to drill down and really focus on the key, underlying requirement to win a Michigan driver’s license restoration case – sobriety – and I doubt that’s going to change.

The law and process is a bit complex, the but simple takeaway (a term I have been using for years in the closing of some of my articles, and that I now see being used elsewhere) is that to win a license appeal, a person must prove that he or she has genuinely quit drinking, and that he or she has both the commitment and the ability to never drink again.

As Michigan driver’s license restoration lawyers, we actively screen potential clients to make sure that they are, in fact, sober, before we’ll take a case.

Here’s the kicker in that regard: MOST of the people who think about filing a license appeal haven’t fully quit drinking, meaning that my team and I wind up taking cases for less than half the people who want to hire us.

Our firm GUARANTEES to win every driver’s license restoration and clearance appeal case we accept. That means if we do take someone’s money, we’ll only get paid once, and have to stick with his or her case until they actually do win.

Of course, it would be a lot more profitable for us to take every case that came our way, or even to “lighten up” on the screening process and take more cases, get paid, and then plow forward, but we live by the golden rule, and do, indeed, treat our clients as we would want to be treated if we were in need of help.

That’s why we guarantee our results.

Thus, our firm won’t take any cases we can’t win, and nobody will ever hand over their money to us for a mere “chance” to win. If we take your money, you WILL get your license back from the Michigan Secretary of State.

Of course, this also means that we have to pass on a lot of cases, but we’re very clear that we won’t screw around with anyone who really hasn’t given up drinking. We’ll screen you to make sure you’re sober, and if you are then, you will get back on the road – guaranteed.

Our approach to DUI cases is equally honest and straightforward:

In my writings about DUI charges (technically called “OWI,” or “Operating While Intoxicated”), I make clear that, in point of fact, a person doesn’t need to be protected by some lawyer from many of the awful sounding potential legal penalties because they are unlikely to happen in the first place

I don’t see anyone else jumping up and down and trying to get across the idea that in all but the most exceptional cases, the chance of going to jail for a 1st offense DUI is practically non-existent, at least here, in the Greater-Detroit area of Wayne, Oakland, Macomb, Lapeer, Livingston, St. Clair and Washtenaw Counties.

There’s an old marketing idea that if you want to sell something, direct your message to people who afraid, and tell them you have what can protect them. This is called “fear-based marketing,” and it must work, because a lot of people do it.

In fact, our marketing message is the exact OPPOSITE of that. I go to great lengths to explain the realities of DUI charges, and how things usually play out in the real world. I emphasize that anyone facing a Michigan DUI charge needs to be told what they need to hear, rather than merely what they want to hear.

Everyone wants to hear that some lawyer can get their case dismissed or make the whole thing go away, but the simple, undisputed fact is that such results are the exception, and NOT the rule.

Sure, it’s sexy marketing to make is sound like you have the magic key to get someone’s DUI charges tossed out of court, but that’s also entirely misleading, and both in the DUI section of our website and in my DUI blog articles, I’m clear about that, often citing, and even linking to the official statistics for DUI cases in Michigan.

Beyond pointing out that the threat of jail is very much over-hyped, and that, if properly handled, a DUI case can be made quite “manageable,” I also typically explain how a DUI lawyer’s efforts need to be directed that the things that will or are likely to happen, and how it’s important to manage a case to protect things, like a person’s ability to drive.

When it comes to consultations, I have often written that anyone looking for a lawyer should absolutely check out his or her options and do some comparison shopping. Unlike anyone else, we encourage you to check around.

Finally, ours is the ONLY law firm that lists its prices online. Personally, I won’t do business with anyone who isn’t clear and upfront about cost, and I have never understood why lawyers are so secretive about money. If you want to know what we charge, click HERE.

I don’t see anyone copying that, either.

To be sure, we are a premium law firm and don’t try to compete with anyone for having the “best” price, but neither do we charge outrageous fees for nothing more than average services, either.

While it’s reaffirming to see some of my blog article ideas “borrowed” by other lawyers, it is disheartening that I don’t see follow-through with the kind of thorough analysis that I put in almost every piece I write, or anybody making things easier for the legal consumer by doing things like publishing their fees and encouraging them to comparison shop.

Normally, my articles range from about 1500 to 2000 words, and when one gets near 3000 or more words, I usually break it into 2 installments.

Indeed, and by contrast, this piece is a bit shorter than most, because – and this goes to the point I was just trying to make – it lacks any real analysis (not that there’s any that could be done beyond me simply venting, as I am doing right now).

To be clear, I’m not mad. If anything, I want the reader to check out as many blogs and sites as possible.

I want the reader to comparison shop.

I don’t want anyone to just take my word regarding what I’ve said here, but rather to go out and see this for themselves.

While I’m confident that what I’ve said in this article will be confirmed, I’d really like it if someone took the time to compare mine to other blog articles in order to independently determine if what I’ve written about here is as true as I’ve made out.

Here’s the bottom line: If you are facing a DUI charge, or need to win back your driver’s license, and are looking for a lawyer, read around, and see how different lawyers explain things (pay attention to the analysis – or lack thereof), and how they explain their various approaches to these cases.

Our firm can handle any Michigan driver’s license issue no matter where you live.

If you’re facing a DUI charge anywhere in Wayne, Oakland, Macomb, Lapeer, Livingston, St. Clair or Washtenaw County, give us a ring, as well.