Indecent exposure charges are a main concentration of our practice. My team and I understand that there are countless reasons for how and why these charges come about. We see everything from people getting frisky in a place that wasn’t as private as they thought to men getting caught in “sting operations” at local parks and on trails. In this article, we’ll examine the court system’s big concern in these cases. Ultimately, anyone facing an indecent exposure charge just wants get out of it and protect their record. We’ll then look at how our firm can help do that. 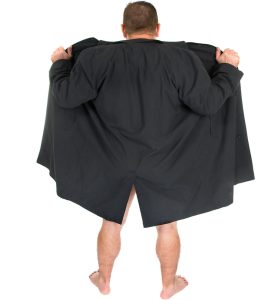 Let’s begin by noting that the overwhelming majority of indecent exposure charges and aggravated indecent exposure charges are made against men. In those uncommon cases where a woman is charged, most involve having been caught getting a bit too frisky with someone, and in those cases, both parties find themselves being cited. More often, however, men are the ones who wind up being charged. Often, it’s for something like outright flashing or masturbating in their car. Sometimes, however, it’s for seeking the sexual company of other men in what turns out to have been some kind of undercover sting operation.

Aggravated indecent exposure is also a misdemeanor, but, as we’ll see, it’s a special kind of misdemeanor.

Let’s first examine the law, then we’ll break down what it really means:

As mentioned above, aggravated indecent exposure is a “special” kind of misdemeanor. Normally, a misdemeanor offense is one punishable by either up to 90 days or up  to 1 year in jail. By contrast, almost all felony offenses begin with sentences of up to 4 years in prison (not jail).

In Michigan, there is a certain class of hybrid offenses, like aggravated indecent exposure, that fall in the middle. These have several names, including:

As the names imply, these offenses carry a potential of more than the standard 1-year maximum jail term for misdemeanors. Because of that, they follow the exact same legal process as felony charges.

In other words, all 2-year offenses are treated as felonies.

This can get very confusing. On top of that, things often play out differently in the real world than they do on paper. In many aggravated indecent exposure cases, my team and I are able to get the charge reduced at the probable cause hearing stage in the district court. This, of course, avoids a conviction for the more serious offense. It also means the case won’t be sent “up” to the circuit court. As the saying goes, “that’s all good.”

In other words, the court system is WAY more likely to send an offender to treatment than to jail. The no jail thing seems like a relief, at first. However, who wants to have to attend (and pay for) serious sex-offender treatment he doesn’t need?

That’s where our firm comes in. We know how to properly handle indecent exposure charges. We know exactly what to do to avoid the potential legal penalties and negative consequences. Key among them is to keep our client from being “treated” for a problem he doesn’t have

My team and I know that the court’s biggest concern in indecent exposure cases is what’s called progression.

Progression describes the process of a someone starting out by committing smaller, less serious crimes – like indecent exposure – and then moving on to increasingly more serious sex offenses. This will invariably be where the court focuses a lot of its attention. Accordingly, it’s also where my team and I direct our efforts.

There is a lot to these cases. However, avoiding as many of the legal penalties and negative consequences as possible is key. The bottom line is that success in an indecent exposure case is best measured by what does NOT happen to you.

We know that many serious and predatory sex offenders started out by committing smaller crimes. Often, they began with minor offenses, like indecent exposure. This is similar to how many serial killers began by killing and/or torturing small animals. Then, things progress.

The reader may be thinking, “sure, but not me.” However, this is a very real concern in every indecent exposure case. We can never allow the court lose sight of the fact that the overwhelming majority of people who commit an indecent exposure offense are one-timers. They will NOT reoffend, nor will they progress in any way.

Even so, the court system wants to make sure that it doesn’t miss any warning signs. No Judge wants to be the person who failed to intervene and stop someone from becoming a sexual predator.

For that reason, the courts will will always take a “better safe than sorry” approach. Nobody is going to lose any sleep over sending some guy to treatment he didn’t need, instead of sending him to jail. Think about that for a moment, and let it sink in…

Our job, as defense lawyers, is to avoid that kind of outcome. We have to show the court that our client is NOT one of these predators-in-the-making. Ultimately, we have to persuade the Judge that he isn’t any kind of risk to ever do this again. The good news is, as noted, for the overwhelming majority of indecent exposure offenders, this is true. However, you can’t just jump up and down and insist that’s the case.

Instead, we have to provide the court with solid evidence to to reach that conclusion. To do that, we’ll present a proper psychological evaluation. My team and I send our clients to one of several highly experienced, specialized counselors. These clinicians have thousands of case hours doing therapy and evaluations for sex offenders. They are the professionals used by the prison system for things like evaluating an inmate’s risk to re-offend upon release.

Because of their specialized experience, these counselors can help us differentiate our clients from the kinds of offenders who are risky. Their opinions matter to the courts precisely because of their unique and extensive work with real predators.

Most of our clients facing indecent exposure charges don’t act out because of some underlying psychological pathology. The guys we represent aren’t criminal sexual deviants, or predators in-the-making. Rather, the reasons they get in trouble range from a sense of general or even sexual frustration all the way to a single, simple instance of bad judgment.

Because we know exactly what to do, my team and I consistently produce exceptional results in indecent exposure cases. We keep our clients out of jail and unnecessary counseling by essential proving that they’re NOT sexual predators-in-the-making.

Notice that there is no mention in the law of being placed on the sex offender registry. This is huge, because one of the most common questions anyone facing indecent exposure charges has is whether or not he (or she) will become a registered sex offender.

The answer? Almost certainly not.

In fact, there are only 2 exceptions that require a person convicted of indecent or aggravated indecent exposure to register as a sex offender:

First, if a victim (meaning someone who saw the exposure) is a minor, and/or

There is another facet of indecent exposure cases that needs to be addressed. It’s easy to describe as “the yuck factor.” We’ve already discussed the concerns about sexual predation and winding up on the sex offender registry. Beyond that, there is just a certain “taint” to the whole indecent exposure thing.

If that can’t happen, then they want to –

• Stay out of jail,
• Remain off the sex offender registry,
• Keep their record clean, and
• Not be sent to all kinds of expensive and long-term sex offender counseling

Nobody can produce a better outcome in indecent exposure or aggravated indecent exposure cases than our firm. This is in part due of the fact that our criminal practice is exclusive to the Greater-Detroit area. For us, this means Wayne, Oakland, Macomb and the surrounding counties. We go to the same courts here over and over again. We know the “hows” and the “whos” of the local system. We know what will fly, and, equally important, what won’t, in any given court.

If you’re facing either an indecent exposure or aggravated indecent exposure charge, you need the best legal help you can get. As you look for a lawyer, the smartest thing you can do is start by reading around. Pay attention to how different lawyers explain the law and process involved in these cases. Also, note how they explain their various approaches to them.

When you’ve done enough of that, start checking around. You can learn a lot by talking to a live person. If your case is in the Greater-Detroit area, make sure you give our office a ring, as well. All of our consultations are free, confidential, and done over the phone, right when you call.

My team and I are very friendly people who will be glad to answer your questions and explain things. We’ll even be happy to compare notes with anything some other lawyer has told you.