If you are facing an indecent exposure or aggravated indecent exposure charge, you are no doubt experiencing a strong mix of emotions, including profound embarrassment and outright fear. Because my team and I handle so many of these matters, we know exactly how to get the best result in your indecent exposure case. We truly understand how freaked out a person can feel when going through one, and we genuinely believe that an important part of our job is to help ease our client’s anxiety, and especially his worries over consequences that aren’t going to happen – like jail. 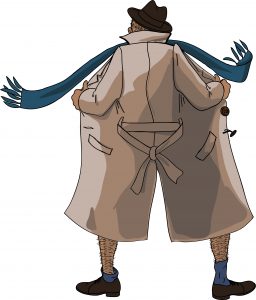 Over the course of more than 3 decades, NOT ONE of the hundreds and hundreds of indecent and aggravated indecent exposure clients we have represented has ever gone to jail. As we’ll see, though, keeping a client out of jail is relatively easy because it is not the biggest threat he faces in an IE case (note that, throughout this article, we’ll sometimes use the term “indecent exposure” to refer to either or both indecent and aggravated indecent exposure). Instead, the most significant risk a person faces is being required to enroll in and complete a long and difficult program of counseling for the treatment of sexual deviancies and criminal sexual offenders.

That can be a nightmare, because most IE offenders do not have any kind of deep-seated sexual deviancy, nor are they otherwise inclined to become sexual predators or repeat offenders. The court system will always (and, as we’ll also see, understandably) take a “better safe than sorry” approach, but there are few things worse than having to essentially go through treatment for a problem you don’t have, and especially one aimed at sex offenders. Avoiding that is key in an indecent exposure case, but doing so requires an intelligent and proactive defense strategy.

As a starting point, we need to establish 3 simple truths about indecent and aggravated indecent exposure cases. This will be useful for the rest of our discussion:

1. Almost all (over 99%) of IE offenses are committed by men. Thus, in this article, we won’t be strictly using “gender-neutral” language, because it really doesn’t apply here.

2. The overwhelming majority of guys who commit an IE offense do NOT have a sexual deviancy problem, and are not likely to reoffend, or commit more serious sex crimes.

3. Although most IE offenders are not likely to commit another sex-type crime, it’s also true that most serious sex offenders did start out by engaging in smaller things – like indecent exposure.

Number 3 is huge, because it is THE reason why the court system takes a “better safe than sorry” approach.

If the reader is the one facing an indecent exposure charge, then try thinking about it this way: Remove yourself from the equation for a moment and imagine some random guy standing before a Judge for either an indecent or aggravated indecent exposure offense. Maybe the guy was getting frisky in a public area of a park with someone, or otherwise exposed in his car in a parking lot.

What’s the first and most important thing you (and the rest of society) wants to happen as a result of his case?

That he never does it again.

Judges are no different. In indecent exposure cases, the idea of punishment is really secondary to doing whatever is necessary to make sure the guy never exposes himself again, or otherwise commits another sex-type offense.

The good news is that jail is not recognized as a very effective method to do that, so it’s not really a first choice as a consequence.

To be sure, if some guy was driving all over town and flashing grade-schoolers, he’s probably going to get some jail time (along with some serious treatment), but in most cases, locking someone up is not a primary consideration in an indecent exposure case.

Not to make light of it, but my team and I have handled countless cases where our client came in practically (or, in some cases, actually) shaking about being incarcerated. No doubt they couldn’t sleep at night wondering how they’d fare with the other inmates after being sent to jail for an IE offense.

Here, I have to interrupt our discussion to do a little shameless promotion, because it would be in our best financial interest to let some poor guy think he really was at risk to get locked up, and then sell our firm as being uniquely able to prevent that from happening.

However, that’s not true, and we’re not like that.

This is why, at the outset of this article, I noted that we’ve never had an indecent exposure client go to jail, and that avoiding jail is relatively easy, because it’s not likely to be on the menu in the first place.

Instead, the real risk in an indecent exposure case is being required to go through burdensome, expensive, intense and long-term sex-offender type treatment even though you’re part of that majority of guys who are not predisposed to become some predatory sex offender.

In the real world, almost everyone is inclined to say, “I’d rather go to counseling than jail,” but once it’s clear that jail isn’t really an option, all that’s left is counseling.

Unless someone really does need help, then there’s little point in making them get treatment for a problem they don’t have.

However, given the reality of the “better safe than sorry approach,” there isn’t a Judge (or anyone else, for that matter) who will ever lose any sleep thinking that, instead of sending some guy to jail for an act of indecent exposure or aggravated indecent exposure, he was sentenced to counseling he didn’t need, or at least more of it than was necessary.

Fortunately, there is a lot that we can do to avoid that.

Nobody knows how to do that and successfully navigate through an indecent exposure charge better than me and my team.

Over the course of more than 3 decades, and after having handled hundreds and hundreds of IE cases, we know exactly what to do and how to be proactive to make sure our clients don’t go to jail or get forced into unnecessary treatment.

When and where appropriate, we use selected and highly trained, specialist counselors with thousands of case hours working with sexual offenders. These are people relied upon by the courts and prison system to evaluate people involved in sex crimes, including those who have committed the most serious of them.

For as well meaning as any other counselor may be, it’s far better to use the specialists who concentrate in sex offenders and have thousands of case hours treating and evaluating them. This is NOT the place for the nice therapist who may help a person come to grips with his or her sexual orientation, or even treat a sex addiction.

When a person is facing an indecent exposure charge, he needs a counselor who knows what makes serious sex offenders tick.

The reader may wonder why we’d send him to that kind of professional.

The answer is that, beyond their qualifications and training, the experience these clinicians have with those who have committed serious sex crimes enables them to distinguish men who are at risk to progress and/or reoffend from those who aren’t.

The term “progression” is used in this context to describe how a person who starts out committing less serious sexual offenses will, over time, progress to committing acts of a more serious nature.

That’s the court system’s big worry, and it’s exactly the concern we need to negate and knock out right from the start.

Everyone will tell the Judge that they’ll never do it again, but to avoid getting the “better safe than sorry” sentence, you need to do more than just say so.

The simple, bottom line is that success in an indecent exposure case is best measured by what does NOT happen to you.

That said, getting through your case with the fewest legal penalties and negative consequences possible takes effort, and there is an investment of everyone’s time. Within the confines of the lawyer-client relationship, we have to be able to speak frankly, and without judgment.

My team and I realize everyone in this situation is embarrassed. Let me put your mind at ease about that: We have handled so many IE cases that we are light years beyond being surprised by anything. Seriously, about the only thing that could shock us is if some guy got caught skydiving naked into a field of flaming cactus plants.

Anything else is pretty much a yawn for us.

The point, all humor aside, is that we’re easy to talk to. This is why we encourage everyone to compare lawyers. As we often say, call us, then call around.

All of our consultations are free, confidential, and done over the phone, right when you call. My team and I are very friendly and non-judgmental people who will be glad to answer your questions, explain things, and even compare notes with anything some other lawyer has told you.