In our roles as Michigan DUI lawyers, my team and I handle a lot of High BAC (super drunk) cases. Chances are, anyone reading this article has either been arrested for, or is looking for information on behalf of someone who was cited for Operating While Intoxicated (OWI) with a BAC of .17 or greater. Most people only learn about this enhanced DUI charge when they have to deal with it. In this article, we’re going to look at what High BAC offenses are all about, and also examine why they’re usually not as bad as they often seem at first. 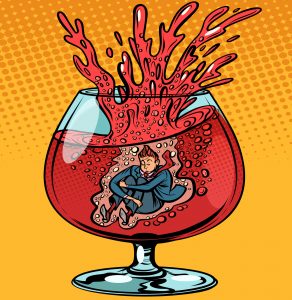 Even if the evidence in the evidence is strong in a High BAC (super drunk) case, my team and I can often negotiate a plea bargain down to a lesser offense for our client. This will allow a him or her to avoid a conviction and potential penalties for the more serious offense by taking a deal and pleading guilty to something less severe. Of course, the first order of business in every DUI case is to try and find a way out of the matter completely, but when that can’t happen (and to be fair, such outcomes are far more the exception, rather than the rule), a plea bargain that avoids a super drunk conviction is always a good thing.

Although the full history of Michigan’s DUI laws is long, and complicated, the short version is that ever since 2003, the bodily alcohol content (BAC) limit in Michigan for drunk driving has been .08 (it had previously been .10). The super drunk (High BAC) law was enacted later, in 2010. The idea was to provide additional and more significant penalties, as well as increased “protections” to the public. This was to take the form of license restrictions in those cases in which a person get caught driving with a bodily alcohol content of more than twice the legal limit.

The High BAC law initially got off to something of a slow start. Early on, plenty of people with BAC results well over .17 were simply cited for regular OWI (Operating While Intoxicated – the technical, legal term for drunk driving in Michigan) instead of the enhanced, more serious “super drunk” offense. As the situation for the likely readers of this article demonstrates, that’s no longer the case, and most driver’s caught with a bodily alcohol content of .17 or higher nowadays do wind up charged with High BAC.

Before we examine the enhanced potential penalties in Michigan High BAC cases versus regular OWI cases, we need to understand the critical importance of that word potential. The fact that this is even an issue that needs to be explained is good news, because there can be a huge difference between what is listed in the law as potential penalties and those that are actually imposed in any given case.

For example, the one thing most people fear most – jail – is rarely imposed in 1st offense DUI cases, and a High BAC (super drunk) case is a 1st offense. In other words, jail is not a likely consequence, even in OWI cases with a BAC result of .17 or greater.

The bad news (and it’s not all that bad, given that jail is generally not on the menu) is that another important consequence – the driver’s license sanction – is not “potential,” but rather is certain, and mandated by law. In other words, it must be imposed just as it’s written. To make this all clear, let’s first review the potential legal penalties in a Michigan High BAC cases, then look at what tends to happen in the real world:

What’s listed above is really a mixed bag of unlikely, possible, and certain consequences. Some, like jail, and almost certain to NOT be imposed, while others, like the driver’s license penalty, MUST be imposed, leaving the others as simply “possible.”

Now, let’s look back at them with an eye toward what a person can actually expect to happen in real world Michigan High BAC cases:

• The fine: It shouldn’t come as a surprise that DUI cases are big revenue generators for the courts, so don’t look for any kind of big break here. When the law mandates a fine of up to a certain amount, plus court costs, those costs can – and often do – equal the same amount as the fine.

In other words, the actual amount charged in Michigan High BAC cases can, and sometime does mean a fine of $700, plus costs of up to $700, as well.

To be sure, some courts are more expensive than others, but practically speaking, nobody is going to walk out of court in one of these cases with fines and costs of less than $1000.

• Jail: In more than 30 years as a practicing lawyer, I have never even heard of a person getting anything more than 14 days for a 1st offense DUI, and such cases are exceptions, because avoiding jail altogether, even in High BAC cases. is usually easy enough for us.

This may cause one to wonder, “Then why have a ‘maximum’ potential jail term if it’s almost never handed out?” Well, there is a good explanation:

Realistically, any and everyone convicted of a 1st offense DUI is going to be placed on probation, and, as part of that, will have to refrain from certain things, like getting into any more legal trouble, consuming alcohol, or using any drugs (including recreational marijuana). He or she will also have to do certain other things, like attend alcohol counseling, and provide periodic breath and/or urine samples to ensure compliance with the “no drinking” requirement.

Probation in Michigan High BAC cases will usually last for anywhere between 1 and 2 years (typically in blocks of either 12, 18, or 24 months).

If a person fails to comply with his or her probationary order, (often, this happens because of a missed or positive alcohol or drug test) he or she will be violated, and can be incarcerated for any amount of that unserved portion of that maximum jail term:

The practical pattern is that a person will usually get progressively more jail for each violation, but at about the 3rd time around, he or she has probably exhausted the Judge’s patience and will get hit with even more jail time. That, in large part, is why the “up to” jail time matters.

• Points: The 6 point penalty for a conviction in Michigan High BAC cases is mandatory, and nothing can be done to avoid them, short of avoiding a conviction altogether.

• Counseling: The law requires the completion of some kind of alcohol counseling and/or treatment program upon conviction for an OWI with a BAC of .17 or higher. While a Judge doesn’t have any discretion to NOT impose this, it is much better if, as part of an intelligent defense strategy, a person enters into the right kind of counseling early on, rather than just waiting for the court to send him or her to whatever program it uses in its jurisdiction. My team and I work closely with our clients to make sure that happens.

• Driver’s license suspension/restriction: Just like the points that go on a person’s license, this penalty is automatic, mandatory, and, moreover, the court has no ability to modify any part of it. Once the Michigan Secretary of State receives notice that a person has been convicted of a High BAC (super drunk) DUI, the license sanctions kick-in automatically. The Judge cannot change them in any way, no matter what.

As the law specifies, the first thing that happens is the suspension of a person’s driver’s license for 1 year. This can be a bit confusing, because it’s only during the first 45 days that he or she is completely prohibited from driving. After that, the person becomes eligible for a restricted license if he or she gets an approved breath alcohol ignition interlock device (BAIID) installed in his or her vehicle.

The terms of the restricted license means that a person to ONLY drive with the interlock device installed, and only for these reasons as specified by law:

There are no exceptions, meaning there cannot be any additions or modifications to the reasons provided by law and listed above. Although I seem to be repeating myself about this, the reader probably cannot imagine how often, after being advised of this, people will immediately ask some question about driving that begins with language like. “Well, how am I supposed to….?” Or, “How do they expect me to…?”

The answer isn’t particularly helpful, but it is simple: That’s part of the penalty. A restricted license is supposed to hurt; it’s supposed to be inconvenient. It’s an intermediate punishment between doing nothing and taking someone’s driving privileges away altogether, and is designed to allow him or her to “get by” (even if barely), but nothing more.

The reader may have noticed that there is no allowance for grocery shopping, or going to the gym, or anything like that. This is by design. It is intended to be hard for the remaining 10 and 1/2 months a person must drive on a restricted license. The law was written so a person can drive for work, school, necessary medical treatment, and whatever the court requires him or her to do, but, as is clear by looking at the listed restrictions, that’s about it.

Although everyone convicted of a High BAC (super drunk) DUI does manage to “get by,” it is our job, as Michigan DUI lawyers, to do everything possible to avoid these consequences by properly fighting the case and either beating it outright, or negotiating some kind of deal to a lesser offense. In other words, we have to manage it. No matter what the facts or circumstances, the gold standard never changes:

Success in a DUI case is always best defined by what does NOT happen to you.

Early on, there were some municipalities that would still write up any 1st offense DUI as a regular OWI instead of High BAC (super drunk), even when a person’s BAC was well over the .17 threshold. The various reasons for this go beyond the scope of this article, and the history lesson is really subordinate to the larger point that today, most people arrested for a DUI who provide a breath or blood sample of .17 or higher are likely to be charged with the super drunk (High BAC) offense.

This is why it’s so important for my team and I to bring about the very best results, which specifically means avoiding as many of the legal penalties and negative consequences as possible. Often, this is done by way of a plea bargain.

Like so much about the law, any examination of High BAC (super drunk) cases could go on forever, but at least as an overview, what we’ve gone over in this piece covers the essentials.

If you’re facing any kind of DUI charge and looking for a lawyer, be a savvy consumer and read around. Pay attention to how different lawyers break down the DUI process, and how they explain their various approaches to it.

If your case is pending here, in the Greater-Detroit area (meaning Wayne, Oakland, Macomb or the surrounding counties), give our office a ring, as well. All of our consultations are free, confidential, and done over the phone right when you call. My team and I are very friendly people who will be glad to answer your questions, explain things, and even compare notes with anything some other lawyer has told you.