As Michigan criminal, DUI and driver’s license restoration lawyers, every case we take begins with a consultation, and all of them start with a phone call. In a recent conversation I had with Ann, our senior assistant, I mentioned I had recently read that a lot of people facing a criminal or Michigan DUI charge feel intimidated to pick up the phone and call a lawyer. What Ann said in response was so simple, yet brilliant, that it became the inspiration for this article: “The worst part about not calling a lawyer is not calling.” 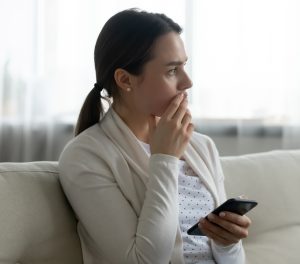 We’ll come back to that statement shortly, because as our talk progressed, it became clear that I was not seeing the full picture of what she meant. I had thought, at least up until that moment, that the main reason people would be afraid to call (or otherwise contact) an attorney was a fear of being “hounded.” I can relate to that, because it’s the very reason I don’t want to give out my contact information online. Plenty of sites offer something like a “free quote,” but the catch is that you must provide a phone number and/or email, first. Then, they never leave you alone….

It turns out there is more to people’s reluctance to call a lawyer than just that. I know that a lot of lawyers can be jerks, but we’re not. However, someone facing a Michigan DUI charge who finds us online doesn’t know that. He or she has no clue that we’re down-to-earth, friendly, and just genuinely nice people. What Ann made clear to me is that there is more than just the fear of being “chased” after providing contact details that makes a person hesitant to call. Unfortunately, it’s largely being put off by the smug attitude of some in the legal profession.

That’s sad. It’s not that I doubt it, but because I am a lawyer, I have never had to call around looking for one. Just from a business point of view, however, I can’t imagine how any attorney or law firm would be anything less than kind to someone reaching out for help. This seems especially true when the lawyer is hoping to gain a new client! Even if the exchange cannot or does not lead to being hired, whatever happened to the idea of treating others as you would want to be treated?

Beyond that, there is another irony at play here, at least for my team and I. Our firm never chases or hounds anyone who contacts us. In fact, even when someone emails and asks us to call them, our standard reply indicates that it’s best if he or she can give us a ring, during normal business hours, when they’re free to talk. We then go on to say that if you don’t hear from them, we’ll call them. However, we only call once, and if they’re not available, we’ll leave a voicemail.

This is particularly relevant for the kinds of cases we handle:

• Nobody who has been arrested for a Michigan DUI charge wants to be talking about it at work, or in front of anyone else that doesn’t have to know.

• In driver’s license restoration cases, most people don’t want everyone within earshot to hear about their prior drunk driving convictions. Similarly, many people prefer to keep their loss of driving privileges to themselves.

As noted above, if we don’t hear from someone who contacts us, we will call them – one time – and leave a message inviting him or her to call back. That’s it.

Our firm is lucky that we’re busy enough to not have to chase people down. We don’t see every inquiry as a prospective new client. In fact, an important thing we do is screen every potential client to make sure he or she is someone we’d want to work with. No doubt there are a lot a$$hole lawyers out there. However, there also is no shortage of people with bad attitudes who can’t avoid getting in their own way.

We don’t need nor want that aggravation. My team and I have no desire to represent someone who is simply hard to get along with. Even when we encounter such a person, however, we always remain polite.

What really matters, though, is that when a person is facing a Michigan DUI charge or criminal charge, he or she needs accurate information. If, for whatever reason, they don’t reach out and call a lawyer, then they’re left in the dark. Here’s a fairly common, real-life example of how that can make a problem worse:

In Michigan, if a person is stopped for a DUI and is cited for refusing to take a breath or blood test, it’s called an “implied consent refusal.” If they don’t request a hearing with the Michigan Secretary of State within 14 days, his or her license will automatically be suspended for 1 year.

Even in those drunk driving cases where a person has no defense to refusing a breath or blood test, my team and I will usually suggest that he or she request the hearing. To be clear, we don’t go to hearings when there is no valid defense, so this isn’t about money. This is because, if the officer doesn’t appear within 20 minutes of the start time, the refusal case is dismissed. Then, the person gets to keep his or her license.

In our experience, about 5 to 10% of such cases, the officer does NOT make it. When that happens, the person won’t have his or her license suspended. That’s a freebie that saves the client having to hire us to file a court case to get his or her license back.

It’s free, but ONLY IF a person contacts us (or at least some honest lawyer’s office) and is told about this before the 14 days are up after an Operating While Intoxicated (OWI) arrest. This squares exactly with what Ann meant when she said “The worst part about not calling a lawyer is not calling.” Anyone too afraid to pick up the phone early enough wouldn’t have even had the chance to save his or her license. Never mind that they could have done so for free.

If the officer does show and the Michigan Secretary of State upholds the implied consent refusal charge and the person ultimately loses, his or her driver’s license will be suspended. Even so, we can file a case in the circuit court and get restricted driving privileges for him or her. Just knowing that can help ease someone’s anxiety as they wait to hear from the court about their Michigan DUI charge.

The only way to find out about any of this, however, is to call a lawyer’s office.

To be sure, the way to find a lawyer has changed a lot in the last number of years. It wasn’t that long ago that a person had no option other than to flip through the phone book. Then, he or she would have to call an attorney whose Yellow Pages ad offered a free consultation.

Nowadays, many (if not most) people prefer to reach out electronically. While initiating contact that way is fine, even the most garden-variety legal issue requires a fair amount of discussion. Emailing and texting aren’t good for that in most cases.

Of course, some lawyers will indulge that preference. However, the risk is that in doing so, a whole lot of important nuance can be overlooked. For example, in DUI cases, evidence is sometimes challenged based upon very small discrepancies. These issues are often discovered through a thorough a back-and-forth dialogue with the client and a careful examination of that evidence.

Still, it seems that the lawyers themselves are a big part of the reason that some people want to reach out as anonymously as possible. Nobody wants to be intimidated or insulted by someone they’re calling for help. Equally so, nobody wants to be seen as nothing more than a sales lead that needs to be “hooked.”

I’ve already explained how my team and I do things. To us, it just seems like the “right” way. We’ve always lived by the golden rule and treated others the same way we’d want to be treated. That said, anyone whose marketing tactics are more aggressive might disagree. To each his own, but we’re comfortable doing what works for us.

The grand takeaway here is that you SHOULD call around to different lawyers. This applies whether you’re facing a criminal or Michigan DUI charge, or looking to win back your driver’s license.

The best advice I have is that if you call some law office and find a jerk on the other end of the phone, hang up. If you leave contact information and they start to “hound” you, either tell them to stop, or tell them you’ve found other representation.

What’s important is that you don’t sit back and do nothing. As we’ve seen, in certain kinds of cases, an early consultation can be important. It can prevent you from doing the wrong thing, or from NOT doing something you otherwise should.

One last observation: It is a central part of our firm’s marketing strategy to openly advise anyone looking for a lawyer to comparison shop. No matter who you call, never get sucked into being “hooked and booked” right away. Remember, as a potential consumer of legal services, there is NEVER a downside to exploring your options. Any lawyer worth considering should respect that.

The more lawyers a person speaks with, the better for him or her. My team and I believe that the more a person does so, the better we’ll look by comparison. As the saying goes, “that’s how we roll…”

Anyone in need of legal help should start by reading around. This blog is a great place to start. It has over 1300 fully searchable articles in the criminal, DUI and driver’s license restoration sections. It is updated with 2 new, original installments each week. We have provided more useful information here than can be found anywhere else. Don’t take our word for it, though – look around and see for yourself.

Pay attention to how different lawyers break down the legal processes for the kind of case you have. Also, note how they explain their various approaches to such cases.

Once you’ve done enough reading, you absolutely should pick up the phone and start calling around. You can learn a lot by speaking with a live person.