In my role as a Michigan driver’s license restoration lawyer, I handle a lot of cases (over 120 per year)– way more than any other lawyer I know.  I guarantee to win every case that I take (and do that by only taking cases for people who have honestly quit drinking), yet even among my client base, probably about half have previously tried a “do-it-yourself” license appeal and lost.  Although the term “do-it-yourself,” in the context of a license restoration case, technically means without a lawyer, I intend the term, at least in this article, to include using some lawyer who does not really concentrate in this field (because that qualification alone narrows the field down to a very small number of lawyers).  The sad truth is that in many cases, the only difference between someone trying their own license appeal or hiring a lawyer is the money saved (or wasted).  The Michigan Secretary of State’s Administrative Hearing Section (AHS) is the agency that decides all Michigan restoration and clearance appeals, and it does so under a very specific set of rules and requirements.  If you’ve had your license revoked for multiple DUI’s you must know and follow them thoroughly in order to win it back, or obtain the clearance of a Michigan hold on your driving record. 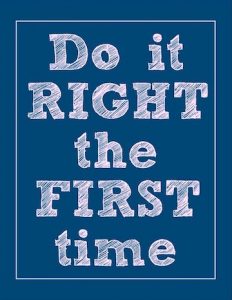 In order to make sure we adequately cover everything, my first meeting with a new client takes about 3 hours.  He or she will be asked to bring in whatever paperwork they have from any prior appeal(s) so that I can see why they lost.  This includes the denial order wherein the hearing officer identifies the evidence presented and the reason(s) the appeal was not successful.  Denials are always based upon problems with the evidence.  Undoubtedly, the hearing officer will point to problems with the timing of the case, the facts of the case itself, the letters of support, the substance abuse evaluation, or the testimony from the hearing, because almost every losing case fails due to problems with one or more of those things.  All of these are amateur mistakes, and for me, completely avoidable.  Whether these things wind up being missed by a lawyer or a true do-it-yourselfer, the results are the same: you lose.  As the old saying goes, “You don’t know what you don’t know.”

There is a very real cost to losing a license appeal; you have to wait another full year before you can try again.  Sure, you can consider appealing the denial to circuit court, but I don’t take those cases for any money because they are expensive, takes months and months, and, most important, are almost always sure losers.  The hearing officers seldom make the kind of legal mistakes that will cause a Judge to overrule and reverse their decisions.  It is very important here to separate the difference between being genuinely sober, and proving that you’re sober, under the rules set out by the state.  Think about it this way:  Assume that you’re an American citizen who has travelled to Canada, and while there, you wind up being a witness to a crime, do the police question you about it.  When you’re asked about your citizenship, you reply that you’re American.  The officer asks you to prove it.  You produce your driver’s license.  She replies that a driver’s license proves nothing.  What about a birth certificate, she asks?  You respond that you left it at home.  At that moment, you are really unable to prove your citizenship, even though you are 100% American.  The point is that genuinely being something or having a particular status (a high school graduate, an American, or sober, etc.) is one thing, but proving it is another.  It comes down to evidence.  You can have all the sobriety in the world, but you must prove it according to the rules, procedures, and standard of evidence required the state.

Thus, I understand the frustration a person feels when he or she has really stopped drinking, files a do-it-yourself license restoration case, and is thereafter denied.  It doesn’t seem fair, but given the rules, fair has nothing to do with it.  This means, by extension, that appealing a loss to circuit court isn’t about what’s “fair,” either.  Instead, the Judge looks at the case that was filed, meaning all the evidence (you cannot testify or include any new evidence in a court appeal), and considers whether the hearing officer’s decision was lawful or not.  I remember sitting in court one time, some years ago, for a 3rd offense felony DUI I was handling.  As I waited for my case to be heard, the Judge called up some poor sap whose lawyer had filed an appeal after losing his client’s license restoration case.  I distinctly remember the Judge telling the guy (and his lawyer) that, had she been the hearing officer, she would have granted his license back.  She went on to explain that the standard for a circuit court appeal isn’t that the Judge would decide the case differently, but rather whether or not the hearing officer’s decision is not supported by material and competent evidence.  In other words, did the hearing officer violate the law?  Accordingly, and even though she would have decided his original case in his favor, the Judge could not reverse the hearing officer’s finding, even though she didn’t necessarily agree with it, because there was nothing illegal about it.  Hearing officers are given very broad discretion to decide these cases, and appealing a loss to court, as a backup plan, is no kind of plan at all.

You can take all this to mean that once you lose after a license hearing, you’re done until you can file again next year.  For some people, another year without the ability to drive limits job opportunities, the ability to get where they need to go, and requires them to have to seek out (and often pay for) rides everywhere.  And while I understand the existence of the “do-it-yourself” mentality, I don’t really understand why anyone goes that route in all but the very simplest of things.  I know plenty of people who try and save a buck, and many of them really enjoy doing it, but I’m not one of them.  My dad was a mailman, and he never was a high wage earner, but he believed in doing things right, so when it came to anything important, he’d hire a professional.  I’m the same way.  I just spent about 3 hours with my CPA doing taxes.  I could certainly have tried to struggle through the job myself, but I’d much rather pay his fee and know everything was done correctly.  Here again we can look to the old sa

ying that “You don’t know what you don’t know,” and I do not know the subtleties of the tax code, how they’re interpreted by the IRS, and, most important, how they apply to me.  I’m as likely to miss something completely as I am to get it wrong, and I see the same thing all the time in do-it-yourself license appeals.

To make my point, here are 4 questions that anyone filing a license appeal should be able to answer without hesitation:

Later, after the appeal is filed, you should be able to answer this question, as well:

Admittedly, this is kind of a set-up, because unless you spend the majority of your workweek handling license appeals, you’re going to have a difficult time answering any of these questions, much less all of them, but you need to get these things right to win your case, even if you don’t have a clue but you manage to get them right by sheer luck alone.  The question then becomes, given the cost of losing, do you feel lucky?

A key thing to bear in mind is that the primary rule governing license appeals opens with this language: “The hearing officer shall NOT order that a license be issued…”  This is a negative mandate, meaning that the hearing officer is instructed to look for a reason to deny an appeal.  If you have 99 good reasons why you should win, and 1 key thing that’s not so clear, you lose.  This is why license appeals are so hard to win and why the prevailing reputation about them perpetuates that notion.  Actually, if they’re done right, they’re easy to win, and that explains why I guarantee to win every case I take.  Yet it is against this background, and in the face of that negative instruction to the hearing officer, that every license restoration case is filed.

For everything I’ve written here, I should be clear that I don’t discourage anyone from taking a shot at a free, do-it-yourself appeal, or one handled by a bargain-priced lawyer.  You could get lucky.  While there is always damage from a lost appeal that needs to be fixed in the next one, I rarely encounter problems too difficult for me to overcome.  That’s not to say that you can’t really screw things up, but unlike certain home improvement projects where you’ll pay more to undo what you’ve done wrong before you even start the project itself, I work on a flat fee basis, so about the worst thing I encounter is a case that may have to wait more than just a year before it should be filed, and those are few and far in-between.

If you’re sober and serious about winning your license back the first time, I’m here; call me.  If you’ve already tried and lost (and, of course, have quit drinking), then call me, as well.  My office is open Monday through Friday, from 8:30 a.m. until 5:00 p.m.  I have the friendliest and most helpful staff you can find anywhere.  My staff knows more about license appeals than a stadium full of lawyers, so whoever answers the phone can also answer your questions right then and there.  We’re here to help, and can be reached at 586-465-1980.  When you’re ready to get back on the road, I can help you regain the unmatched joy of driving again.