This short article, like many others on this blog, was inspired by a conversation I had with Ann, my senior assistant. She was giving me the details of a conversation she had with someone regarding his DUI and suspended license charges, and noted that the caller had pointed out how he watched in court as one woman went before the Judge for a drinking and driving offense and didn’t get any jail time, and then tried to use that as a basis to predict what would happen in his case. Ann asked, of course, it he knew anything about her charge, prior record, or case history, and he responded that he didn’t. Ann then explained to the caller that no two cases are alike, and that you can’t ever compare your situation to anyone else’s, especially if you don’t know all of the details. That’s when the idea hit me, because I realized that just about everyone one of us looks around for comparisons in just about every situation we find ourselves. That may work, or at least work better, when it comes to fixing a jammed garbage disposal or something like that, but not within the context of a criminal or DUI charge, where there are just way too many variables. 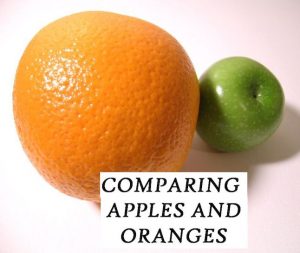 You most likely know this already, but that doesn’t stop you, or me, or really all of us from doing it anyway. That’s human nature. My hope is that this short article will help make clear how this not only doesn’t work in criminal and DUI cases, but can also be misleading. Let’s use an example: Imagine Drinking Dave picks up his 1st DUI in city “A.” On that same night, Tipsy Tina is also arrested for her 1st DUI in city “A,”, as well. Sounds kind of like they’re in the same boat, right? Well, there are about a million things (maybe even more) that could make their cases very different, and that, in turn, could make what happens to each of them very different, as well.

If Tina has had 2 prior MIP’s, even if they were quite a few years ago, her relationship to alcohol is going to be perceived by the court as risky, if not outright troublesome. This would be even more so if her BAC at the time of her arrest was high, like a .21. If Dave, by contrast, has never been in any kind of trouble before and his BAC was .12, he’s just automatically going to be seen as less risky than Tina. Generally speaking he’s likely to wind up with a less demanding term of probation, meaning he’s likely to have to test less frequently, and will probably not be found to need the level of rehabilitative or treatment services that seem almost certain for Tina.

What if, instead of those facts, we assume that neither Dave nor Tina had any kind of prior record, and Dave blew a .16, while Tina blew a .12. Now it sounds like Dave is worse off than Tina. However, as it turns out, city “A” has 3 Judges, and Tina’s case is assigned to the one known as the toughest of the group, while Dave’s case is sent to the most lenient. Dave is still more likely to get out easier than Tina.

Finally, let’s assume that both Dave and Tina have no prior record, and each blows a .15 at the time of their arrests, except that Dave is arrested in city “A,” while Tina is arrested in city “B.” As it turns out, city “B” is one of the few places left where, if the lawyer does things right, the client can get out a 1st offense DUI with nothing more that fines and costs, and no probation. City “A,” by contrast, is known for imposing the most demanding terms of probation. All other things being equal, Dave wins again (poor Tina!). There are, literally, endless situations like this that arise in the real world.

What’s more, the examples above involve known variables. When you sit in court or otherwise hear about someone else’s case, however, you have no idea what things are in their background and/or part of their case that can make their situation very different, even if it seems similar. Beyond a person’s prior record, or lack thereof, we each present with a kind of “value” called social capital. You can bet that a married nurse or teacher who lives with her husband and 2 kids in the home they own, and who has a decent driving record and no criminal priors, has a lot of it. By contrast, a guy who isn’t working, has some license suspensions, prior convictions, and even a few unpaid tickets on his record, and who lives with his current girlfriend, has 3 kids by 2 different women from his past (all of whom live with their “baby mamas”) brings very little social capital to the table. Who you are as a person matters.

In my practice, I could take the exact same case in every respect, and the outcome in one court would be very different than in another. This is why I always try to explain how much location matters. On top of that, Judges, like all people, are unique. Thus, even the same case before different Judges in the same courthouse can yield vastly different results. In addition, the police officer who arrests you can have an impact on your case, as well. Assume that Dave the drinker, from our example above, was originally pulled over for speeding. When asked for his paperwork, he realized he hadn’t put his current insurance card in his wallet. Frustrated because he wound up arrested for a DUI, he got a little “lippy” with the officer, and said, “Thanks for ruining my life. Like you’ve never driven with a buzz before. Yeah, thanks a lot, man. You have a good day now, officer.” One officer may just chalk up Dave’s attitude to the alcohol and the situation and not write Dave up for the insurance or the speeding, while another might ticket him for everything. Heck, the same officer might give a break or not depending on how his or her day is going. My point is that every case is different from every other case from the very beginning, so trying to compare your situation to someone else’s simply never works.

Most of the time, in the real world, I can usually get a darn good idea of what will happen in someone’s case just by asking some questions. Still, I know enough not to draw any firm conclusions too early. Back when I was in college, I had a job at the Detroit News, in the sports department. There was a giant poster on a wall there that read “NEVER ASSUME.” As a lawyer, I need to be mindful of that because even though I can, through my questions, pretty closely figure out a person’s situation, there are things I won’t know until everything comes together, so it’s a capital mistake, as the old saying goes, to assume. The thing is, as a local, Detroit-area lawyer, I am aware of and work daily with most of the variables that affect the outcome of every case I know all about the local courts and Judges and prosecutors, and how those things combine differently in each and every situation to make it unique, and different from all others. I know, for example, how one thing that goes unnoticed by one Judge can send another into orbit, or how one court will charge almost double for the same as another. Thus, the woman who says her DUI cost about $650 in fines and costs is not a barometer for the unlucky guy who, even though his case is pretty much identical, ends up in the court that charges the most, and winds up paying over $1500.

Imagine your cousin Louie calling you up and saying he had a pizza last night and it was terrible. Do you now stop eating pizza? Maybe Louie threw a frozen pizza in the oven and didn’t cook it right. Maybe you have an awesome, independent pizzeria near your house. Would Louis have said the same thing if he’d have eaten that? The point is, you can’t compare your situation to anyone else, especially with so many variables involved.

And that’s our grand takeaway here: you can’t compare. You can, however, ask about your situation and come to understand why it is the way it is. That’s part of your lawyer’s job. If you are facing a criminal or DUI charge in any court anywhere in Macomb, Wayne or Oakland County, and looking to hire a lawyer, I can help. I know how to make things better and secure the best outcome possible, whatever the situation. All of my consultations are done over the phone, right when you call, and my office can be reached Monday through Friday, from 8:30 a.m. until 5:00 p.m., at 586-465-1980. We’re here to help.