The idea for this article came from my associate attorneys after a week where we saw how things go bad the minute someone starts talking to the police without a lawyer (meaning before coming to us). What I want to make clear in this article is the one universal piece of legal advice that holds true in every situation: shut up. If you are being questioned by the police, always exercise your right to remain silent. 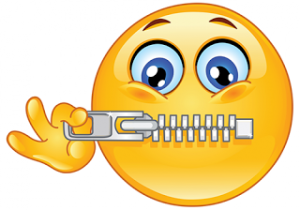 Indeed, of all the rights we have as Americans, none is waived so freely, so frequently, and so much to a person’s legal detriment, as the right to remain silent. In the real world nobody ever talks themselves out of trouble – it’s just the opposite. If you haven’t talked to the police yet, then don’t. If you already have, then we are simply left with the reality of that, and have to make the best of it.

We’ll begin by restating what is far more overlooked than obvious: you have an absolute right to remain silent. We’ll get into this more later, but the day before this article was written, I met with a client who hired me after he spoke to a police detective and was subsequently arrested and charged with a crime. Because he is a nice guy who has never been in trouble before, my client naively asked the detective if it was a good idea to be talking to him, and if he should get a lawyer first.  The detective astutely replied, “I can’t tell you what to do.”  Of course, my client now understands that he shouldn’t have said a word.

People often feel obligated, or in some way “pressured” to answer questions when asked by the police. Most people are good by nature, and even though they may have broken a law, they don’t want to appear uncooperative, and because of that, they “cooperate” themselves straight into more trouble, only to later realize they should have just kept quiet.

If you watch ANY news shows on TV and ever see any of the super-star, million dollar lawyers being interviewed, you’ll hear each and every one of them repeat, without exception, that they’ll never allow a client to say anything to the police.

Right now (and this is NOT any kind of political opinion), there are questions swirling about whether Donald Trump will sit down for an interview with Robert Muller, the Special Counsel. Whether any lawyer loves Trump, or hates him, absolutely every last one is crystal clear that if Trump was their client, they’d NEVER permit him to testify, and they’ll further indicate that only an idiot for a lawyer would ever let a client go in to speak with the police or a prosecutor.

What’s significant about all this is that you never hear any lawyer make an exception – ever – because there isn’t one.

What’s also true is that most people learn this lesson after they’ve talked to the police. If I haven’t already made it clear enough, the point we’re driving at is shut up and don’t answer any police questions.  Always exercise your constitutional right to remain silent

If you have said anything so far, do yourself a favor and let your lawyer do the talking from here on out. This applies in everything from embezzlement and DUI to indecent exposure and drug possession cases. Even if you’re asked about something and you can prove that, when it happened, you were out of the country, on vacation, it’s best to let your lawyer do that for you.

If you pay attention to the news at all, you’ll notice that anytime a police officer gets in trouble with the law, the first thing he or she gets is a good lawyer.

You should take that as a pretty big clue.

To be perfectly clear, you should shut up right from the get-go. In many cases, the police don’t have to read your Miranda rights until after you’ve been placed under arrest or otherwise “detained.” The requirement that you be advised of your Miranda rights applies only after you have been detained, and usually not when you first encounter an officer.

The fact is that you don’t have to answer any questions, ever, beyond identifying yourself, and this applies at all times, including the very first moment you have contact with the police.

Here’s a real world example: a friend of mine whose dad is a retired police officer told the story of another retired cop who moved up north. One day, he called the local sheriff to report his wife was dead. When the deputies arrived, they asked him what happened. He replied, “You’re the detectives; you figure it out.”

Obviously, the implication is that there was some kind of foul play, but whether or not that was the case isn’t the point. The idea is that the caller knew he didn’t have to say a word from the outset, and wisely chose to remain silent.

You should to. And if you have a pending case and you didn’t do that, then we’re going to have to try and undo any damage you did by talking.

Let’s look at another hypothetical example:

Assume that Honest Carl lives with his wife and kids in some far away state, like Arizona or California, and that he has a sister, Diane, back here in Michigan who is a police detective.

One day, Detective Diane gets a call from Carl who says that the local police have contacted him about his son having left the scene of an accident. The officer asked if any younger person was driving the family car on Saturday, and, if so, where they went with it.

Carl tells his sister, the Detective, that he knows his son was driving the car at that time, and in the area where the officer indicated the accident occurred, no less. He checked the car and found is had no damage. As Carl tells it, he isn’t certain, but he’s pretty sure that the local police mentioned something about a “partial plate number” and the family car matching the description that was provided being driven by a young man.

Carl asks Diane if he should have his son talk to the officer.

What do you think Detective Diane is going to say?

Do you think that, because she’s in law enforcement, she’s going to suggest that her nephew speak with the nice officer and wind up admitting that, yes, he was driving the car on Saturday, and yes, he was in the area where the accident occurred?

Do you think that she’s going to suggest he admit to a misdemeanor crime, when it appears the police don’t have enough info yet to charge him?

She’s going to tell her brother to make sure both he and the kid shuts up. She’s going to explain that if he so much as admits that sonny boy was out with the car that day, then the police will be getting evidence that they don’t have right now. Police are very good at solving crimes, and they often do it by getting people to answer questions.

If Carl’s son was caught on video leaving the scene of the accident, the police wouldn’t be calling to question him; they’d simply charge him.

A very common ploy is that a detective or officer will call and either say that, if you don’t call back, they’ll charge you. If they had enough evidence to do that, they would have already done so. Anytime you hear something like that, it’s almost always because the police DON’T have enough evidence to make a charge and need you to fill in the blanks.

Imagine Carl’s son returning the officer’s call; it would quickly get to something like this:

So, you were driving the red car on Saturday, then…

Okay, and you admit that you were around X and Y streets sometime around 4 pm…

This example can be applied to just about any situation. If the police have enough evidence in a case to issue charges against you, then they will just go ahead and do so. This happens all the time in things like DUI, possession of drug and suspended license cases. If you’re pulled over and found to be intoxicated, the police don’t need “your side” of the story.

It’s the same if you’re pulled over and you are found to have weed in your pocket, or your license is suspended.

For all we know, in Carl’s case, the person who gave the police a description of the car, the young driver and partial plate that led to the police calling him could have gotten it wrong. The police need to place a car in the area of the accident first, and then find out who was driving it. It’s very possible that it could have been someone else – anyone else. Without Carl or his son confirming that the son was driving the car and was in the area of the accident, it is highly unlikely that he’d ever be charged.

In my office, we’ve seen many a case fizzle out because our client called us first, and we told the police that he or she wouldn’t be answering any questions. This doesn’t make the police want to buy us lunch, but they fully understand how things work.

Police are used to wrapping up most cases through questioning, and they are very good at it. If I needed to elicit information from someone and I had my choice of using a veteran police detective or an Ivy-League lawyer to get it, I’d take the cop every time.

For all the highbrow legal analysis we could dive into here, the simple takeaway is to shut your mouth and don’t talk to the cops. If you have already spoken to the police, then we’ll have to look at what you said and how that affected your case.

If you haven’t said anything yet, then don’t.

This is one area where all lawyers agree, and, as much as the police don’t want you to exercise your right to remain silent when they want to question you, it’s the very first thing they’ll do if they ever find themselves in the hot seat.

If you are facing any kind of criminal trouble and have the police calling you, get a lawyer. Seriously. This isn’t a sales pitch for legal services; it’s just what you should do. If you cut your finger off, you should go to a hospital. When you’re facing criminal charges, you shouldn’t screw around doing the amateur thing. Instead, as you look for a lawyer, do your homework and read around. Then check around.

If your case is anywhere in the Greater-Detroit area (meaning Wayne, Oakland, Macomb, Lapeer, Livingston, St. Clair or Washtenaw County), give our office a ring. All of our consultations are free, confidential, and done over the phone, right when you call,