In part 1 of this article about why real sobriety is the absolute key to winning a Michigan driver’s license restoration or clearance case, we began by noting that there are really 3 kinds of people in the license appeal world: Those who are truly sober, those who think they’re sober, and those who pretend to be sober. We looked at the main rule governing license reinstatement cases, and boiled it all down to the essentials that a person must have been completely abstinent for a “legally sufficient” period of time, and must also have the ability and commitment to remain sober for life. 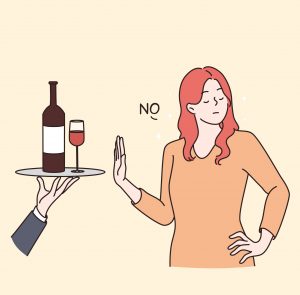 Essentially, this all means that a person has honestly quit drinking and is a safe bet to never drink again. To be clear, the abstinence/sobriety requirement also means a person can’t use drugs, and that included recreational marijuana. As Michigan driver’s license restoration lawyers, our job begins with us screening potential clients to make sure they really have quit drinking (and using drugs) for good. Because our firm guarantees to win every case we take, we need to make sure we don’t undertake representation for someone who is anything less than truly sober, or otherwise unable to succeed.

Our guarantee helps a potential client know that he or she isn’t risking any money by hiring us. The very fact that we take someone’s case answers any question like, “What are my chances?” We can’t afford to get stuck taking on an appeal that we can’t make into a winner the first time around, because we’re then obligated to do the whole thing all over again – for free – the next year. The key to our success, though, starts with a client who has honestly quit drinking, and has both the ability and a genuine commitment to remain clean and sober for life.

Because of the way the law works, anyone who even thinks he or she can or should be allowed back on the road by having cut back his or her drinking, or who otherwise thinks they’ve found a way to somehow “manage” it is a million miles away from being able to win a license appeal. This explains why we’re so thorough with our screenings.

We could detour down a very long road explaining why this is true, but the bottom line is that the license appeal rules make clear there is no room to even consider reinstating driving privileges for anyone who has consumed alcohol (or used any drugs, including recreational marijuana) for that “legally sufficient” period of time (remember, our firm won’t move forward until a person has been clear for at least 18 months), and/or who isn’t 100% convinced that he or she can’t ever drink again, and is otherwise committed to lifetime sobriety.

Thus, anyone who even thinks he or she can ever drink again, like on a special occasion – even if it’s nothing more than a toast at a wedding – in addition to not being truly sober, has absolutely NO chance to win a license appeal before the Michigan Secretary of State.

Some people will say that’s unfair, but the law was crafted in such a way to basically hold that if a person racks up multiple DUI’s, then he or she considered risky, and the state isn’t going to take any kind of chances that it won’t happen again unless and until they prove they don’t drink at all – precisely because people who don’t drink are exactly zero risk to ever drive while drunk.

The practical effect of the law is that anyone who has lost his or her driver’s license after having been convicted of 2 or more DUI’s can’t can’t get it back until and unless they prove that he or she has made an affirmative decision to remove alcohol from his or her life permanently. It does NOT matter that drinking (or even using recreational marijuana) is legal. The need for complete prior and continued abstinence is the price that must be paid paid by any such person to get their license back.

This need for complete abstinence is not a problem to anyone who is truly sober. However, it often becomes a source of frustration to those who think they’re sober, meaning those who think that having changed their drinking behavior is enough, or who otherwise think they can still drink, but believe themselves to be committed to never driving drunk again.

Often, when we explain what it takes to actually win a license appeal, people who aren’t genuinely sober will say something like, “This is bull$hit!”

Whatever one may think about the process, and as the old saying goes, “It is what it is.” In the context of a driver’s license appeal, there is simply NO room for a person to ever drink again – period.

In a strange way, people who pretend to be sober are the easiest of all to deal with. In practice, it can sometimes be hard for a genuinely sober person to prove his or her sobriety by the state’s standards, but my team and I know how to get that done. In fact, we do it so well, we guarantee to win every driver’s license restoration and clearance appeal case we take.

By contrast, anyone who isn’t really sober is not only easy to spot, but will fall seriously short of being able to make the proof required by the Secretary of State.

The hearing officers who decide these cases KNOW that people are going to lie to them every single day about when they last drank, if they plan to (or even think they can) drink again, and just about everything else related to their alcohol and drug use. Among the many skills hearing officers develop is an almost super ability to detect BS.

The reality is that winning a driver’s license restoration or clearance case is hard, and the system is set up in such a way that it is a lot more likely that a truly sober person will be denied because his or her proof wasn’t strong enough than any BS-er who is only pretending to be sober will ever get through.

Often enough, people who are truly sober need some work to be able to prove their case. Being sober is a foundational requirement to win a license appeal, but beyond just being sober, as we noted above, a person has to prove it by the required “clear and convincing evidence,” and must otherwise meet the requirements of the established process. That’s where our firm comes in.

Those who think they’re sober need to learn what real sobriety is. Almost everyone who is genuinely sober gets there by first trying to cut down, limit or manage their drinking, and when that doesn’t work out, then discover that the only way to have any peace from the problems brought by or surrounding their alcohol use is to completely sever any relationship to it.

Eventually, some of theme will “get it.”

Those who pretend to have quit drinking, however, are just living in denial.

Fortunately, some of them will get to the point of having had enough (the AA people describe this as “being sick and tired of being sick and tired”), and will at least try to get a handle on their drinking, and a lucky few of that group will have that life-changing “light bulb” moment and finally quit for good.

And those are the people who have the ingredients to make a winning case.

If you are looking for a lawyer to win back your driver’s license or obtain the clearance of a Michigan hold on your driving record so that you can get a license in another state, be a savvy consumer and read around. Pay attention to how different lawyers explain the license appeal process, and how they explain their various approaches to it.

When you’ve done enough of that, start checking around. You can learn a lot by actually talking to a live person. My team and I can handle your case no matter where you live.