Certain conditions must be met in order to win a Michigan driver’s license restoration or clearance case. The 2 most important of these are, first, that a person proves he or she has not had a drink for a “sufficient” period of time, and second, that he or she is a safe bet to never drink again. In my role as a Michigan driver’s license restoration lawyer, I sometimes encounter a few people who seem determined to have conflict with everyone and everything they meet. The State of Michigan has a very specific system in place to decide license appeal cases, and it doesn’t bend for anyone. In this article, I want to make clear that, unlike ordering a hamburger, when it comes to winning your license back, you can’t just have it your way. 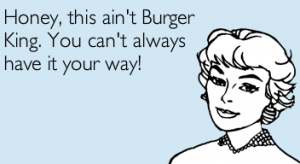 In order to win, a license appeal case must comply with the rules established by the Secretary of State. If it was up to me, there are lots of things I would change about the license appeal system, but it’s not. Instead, it is what it is, and not what you, me or anyone else wants it to be. In order to win, I have to work squarely within the state’s guidelines. Most people get this, but it can be a problem for those who aren’t particularly good at following rules.

The state, for its part, doesn’t “care” if someone ever drives again. It is important to understand that among those people whose driver’s licenses are revoked for multiple DUI’s, only a minority of them really do quit drinking for good, and that is the absolute key to winning a license appeal. The license restoration process, therefore, is really about screening these people out from the larger group. At the end of the day, a person either meets the standards set by the state or not.

The idea that a person doesn’t like how the process works, or doesn’t want to do something the way the state requires, is a complete non-starter. Moreover, my office has its own specific way of doing things to make sure all my cases meet the state’s criteria. I guarantee to win every license restoration or clearance appeal I take, but I couldn’t do that if I didn’t play by the rules. There is no room to modify what the state expects, or how my office does things just because someone wants to do it “their way.”

A reader with a more easygoing (as in “normal”) disposition would probably be surprised at how many people in this world seem hell-bent on making things more difficult than they need to be. Asking questions is all well and fine, but there are just certain things that can’t be done on one’s own terms, and driver’s license restoration appeals are one of them.

Let me use an example: I hate needles. If I have to undergo any kind of testing or medical procedure and I’m told that there will be a blood draw, or that I’ll be given an IV, I cannot help but ask if there is some way around that. I will almost always ask, “Does the blood test have to be done?” or “Do I really need the IV?” That’s a lot different, however than me saying something like I’ll do the procedure, but I refuse to have the needle. In these cases, I have to put on my big boy pants and just deal with the poke, because I can’t have it my way.

When someone seeks the clearance of a Michigan Secretary of State hold on their driving record in order to get a license in another state, they have the option of not holding an actual hearing and filing what’s called an “administrative review,” which is an appeal by mail. These are sure-fire losers, with 3 out of every 4 being denied (and who knows how many times the 1 out of 4 who eventually do win have tried before). I won’t do them, even when offered to be paid my full fee.

When I take a license appeal, it’s either done my way or not at all. In somewhat ironic sense, it’s a matter of “my way, or NOT the highway,” although my reasons for insisting that I control things is that when things are done my way, the client WILL be driving on the highway soon enough, whereas, the other way around, they won’t be on the highway at all, but will, instead, be stuck bumming rides.

What’s perhaps most frustrating to me is that the license appeal process isn’t all that hard, if you’re properly guided through it. In my office, we begin with an initial, 3-hour meeting that, in large part, prepares the client to have his or her substance use evaluation completed.

Once that has been completed by the evaluator, and we’ve reviewed it to make sure it’s satisfactory, we’ll work with the clients on his or her letters of support, and when those are finished, the case is filed and we wait for a hearing. We’ll have a “prep session” before the hearing, and then the next day, we’ll go in and conduct it.

This is not an exhausting process. It’s not like a person has to spend hours and hours, or days on end, in court. Instead, they really need to do nothing more than come to see me once, and then come back for the hearing, later.

Of course, it’s not as easy as 1-2-3, or I’d be out of business, but the point I’m trying to make is that there is nothing overly-demanding or “weird” about the license appeal process, so when people start having all kinds of trouble with it, the real problem usually lies within them. Often enough, it become obvious that these are just plain difficult people. Still, there are some otherwise seemingly normal people who want want the world to bend to them, rather than understanding that in certain situations, you either play by the rules, or you don’t play at all.

Often, people will contact me and say something like they “want to get this taken care of ASAP.” That’s nice, but it’s not going to happen, at least as quickly as they probably think it is. Here again, we have to play by the state’s rules.

There is no streamlined process for license appeals, nor is there any way to expedite a particular case. Forgetting any time it takes to get a case ready, from the first meeting, evaluation, to letters of support, there is a wait from the time the matter is filed with the Secretary of State until a hearing is scheduled. Once we file a case, we can’t do anything to push it through faster. The file is in a queue with all the rest, and all a person can do is wait patiently.

Or not – but that won’t make the case move along any faster.

Another source of frustration for me, as a lawyer, is when people start talking about the Secretary of State as “they.” I understand that it sucks not to have a license, but when someone asks, “How do they expect me to keep a job if I can’t drive,” how am I supposed to respond? There is no “they.” There is no person or group of people who have any expectations about how someone is supposed to get by, or not, without a license. A license is revoked automatically, by operation of law, after a person racks up 2 DUI’s within 7 years, or 3 within 10 years.

There are rules in place that control when and how a person can seek to have it reinstated, but there is no body of people – no “they” – who thinks about any of this. The closest there is to any “they” are the hearing officers, and their job is to decide each license appeal case by determining if a person followed the rules regarding the evidence submitted, and, if so, if that person’s evidence meets the legal standards set to either restore driving privileges or grant a clearance removing Michigan’s hold from the driving record of anyone who lives out of state.

The summary of those standards is that a person must submit a substance use evaluation and letters of support, among other documents, which must show, by “clear and convincing evidence,” that his or her alcohol and/or substance abuse problems are “under control,” and are “likely to remain under control.” What this means is that a person must convincingly show that he or she has quit drinking for a sufficient period of time, and has the ability and commitment to remain sober for good. That means to never drink again.

Right out of the gate, my office can rule out anyone who wants to argue that it’s unfair that the state is “telling” them they can’t drink, especially, as they’ll often point out, because drinking is legal. The goal of the license appeal process is to make sure that anyone who gets back on the road has quit drinking for good. When someone wants to argue that they shouldn’t be told not to drink in order to be able to drive again, they’re missing the point by a million miles.

Some people aren’t so specific, and become angry that they have to do anything to have their license reinstated beyond showing up at a Secretary of State branch office to get it back. These folks think that just needing a license is enough, or that the fact that they haven’t had one for a long time means anything. Ditto for those who point out how long it’s been since their last DUI.

None of this matters.

What does matter, though, is that a person accepts that there is an established process in place to get back on the road. The process is what it is, and cannot be modified because someone would rather do this, or not do that. As a driver’s license restoration lawyer, I know how to navigate this process. I don’t make the rules, and as much as I understand that some of them may be burdensome, it doesn’t matter what I think; it is what it is. This means it does absolutely no good, when someone gets frustrated, to ask me, “How am I supposed to….?”

Even though you need your license back, you can’t just “have it your way,” at least as far as the license appeal process is concerned. However, you sure can do a lot once you’re able to drive again, so relax and make sure it’s done the right way.

If you’re looking for a lawyer to help you win Michigan driver’s license restoration or clearance appeal, I can help. Be a good consumer, do your homework, and read around. Then, check around. All of my consultations are confidential, and done over the phone, right when you call. We’re really friendly people who will be glad to answer your questions and explain things. We can be reached Monday through Friday, from 8:30 a.m. until 5:00 p.m. (EST), at 586-465-1980.