In my role as a Michigan driver’s license restoration lawyer, I’ve written every article this blog, which is by far the best and most comprehensive resource for information about every facet of the license appeal and clearance process on the internet. One thing that I have to bring up regularly, just to keep squarely within view, is that you must have quit drinking in order to win your license back. While I guarantee to win every case I take, I do not take every case that comes my way, and will only accept cases for people who genuinely do not drink anymore. I get endless emails from people who tell me how much they need a license and how long they’ve gone without one, but when I ask how long they’ve been sober, things suddenly go quiet. In this familiar-themed article, I want to make clear, once again, that you must have completely severed your relationship with alcohol as a pre-condition to winning a driver’s license clearance or restoration case filed with the Michigan Secretary of State’s Administrative Hearing Section (AHS). 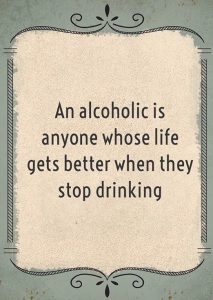 Look, I’m in business to make money, not turn away people who are willing to hire me. However, I do have a conscience AND a guarantee, so I simply cannot and will not take on a case that cannot win. Sobriety is a non-negotiable requirement to win your license back. I was speaking with another lawyer recently about this, and he kind of laughed in agreement and said that once, when he asked a guy if he was sober, the reply was something like, “Yep. I only drink beer now.” Among other things, over 27 years as a lawyer has taught me that many people simply don’t understand that an important part of what sobriety means is that you have completely stopped drinking. For its part, the Michigan Secretary of State (SOS) has drawn a line in the sand regarding license restoration and clearance appeals; only people who have quit drinking for good can win. Period. The state knows that, whatever people will say about how they are “different” now when it comes to drinking, and despite all the commitments and promises they make to never drink and drive again, those who no longer drink alcohol are exactly zero risk for a repeat performance. That’s the safest bet, and the only one the state will make. It’s that simple.

At least to me. And the Secretary of State. Part of the problem here is that everybody needs a license, so when some of them go online and find something like this blog or my website, see that I guarantee to win every case I take, they think, “Eureka!” It’s human nature, I suppose, for someone to focus more on how tough things have been without a license and how long they haven’t had one, than anything else. It’s perfectly understandable that a person will believe, in his or her heart of hearts, that no matter what, they’ll never drive drunk again. Under the main rule (Rule 13) governing license appeals, however, a person has to prove that he or she has been completely abstinent from alcohol for a sufficient period of time (in the rule, this is stated as the person’s alcohol problem being “under control“). The Secretary of State’s AHS hearing officers are given rather wide discretion in determining how much abstinence is enough (i.s., “sufficient”). More important, the second part of the rule requires that a person prove that his or her alcohol problem is “likely to remain under control,” which means that he or she has the commitment and the tools to remain alcohol-free for good, and otherwise seems like a safe enough bet to not drink again. This is really the “meat and potatoes” of the license appeal process – proving that a person will never drink again.

Now, if the whole thing was as easy as saying you haven’t had a drink in so many years and will never have another as long as you live, we could all go home. I’d be out of business and all the SOS hearing officers would be out of jobs. In fact, lots of people are smart enough to figure out that you have to at least say you quit drinking and plan on NOT drinking in the future. The license appeal process, however, requires more than just saying this, it’s about  proving it. The AHS hearing officers spend all day, every day, examining the documents required to file a license appeal, especially the substance use evaluation and letters of support, to see if they describe someone who has really quit drinking and has a genuine commitment to sobriety. They expect this evidence to be honest and unbiased. They know what to look for, and, more important, they can smell BS a mile away. On top of all that, they get to “reverse engineer” those cases where someone previously convinced the state that their alcohol problem was “under control” and also “likely to remain under control,” won a license, and then lost it again for drinking to see what they missed, or what went wrong.

In a very real sense, the hearing officer’s job is to be a skeptic and doubt everything. Actually, this function is written into Rule 13 rule itself, which begins by advising that “The hearing officer shall NOT (emphasis added) order that a license be issued…” To someone filing a license appeal, this means that despite the 99 reasons why you should win your case, the hearing officer is looking for the 1 reason why you shouldn’t. Imagine you’ve been put in charge of inspecting the exterior of a small submarine before it dives to the bottom of some lake with 10 people on board. Would you give it the “okay” if it was only 99% waterproof? Your job wouldn’t be to look for all the things that are right with the sub, but rather the 1 thing that isn’t. Ditto for the hearing officer deciding a license appeal.

To be sure, there are some people who know so little about the license restoration process that they’ll admit to having the occasional drink, either to the substance use evaluator and/or to the hearing officer. This, of course, is an automatic (and legally required, no less) deal-breaker. As a side note, when I am contacted by someone who lost for this reason, I have to explain that they’ve really dug a hole for themselves because if they come back next year and say they don’t drink anymore, the hearing officer is (rightfully) going to be suspicious of that claim. After all, the person was only just saying that they can drink occasionally without problem, and then they suddenly realized their drinking was, in fact, such a problem they had to quit. And even if that was true, it would provide far from enough sober time. The larger point I’m trying to make is that while the hearing officers have plenty enough people who will automatically (and must) be denied because they admit to drinking, they have the experience and skills necessary to figure out who is really sober from someone who just says so.

That same skill is also important in my office, as well. For my part, I have completed a post-graduate program of addiction studies; I understand the clinical realities of addiction (including denial) and recovery. Because the central inquiry in every license appeal is whether or not a person has quit drinking for good, and since I guarantee to win every case I take, I NEED to make sure anyone I represent has honestly done that, and really is sober. If I didn’t, I be stuck trying again and again to win a license back for someone who is not qualified. No thanks.

As much as I want this article to be informative, I’d also be less than honest if I didn’t admit that I have a huge self-serving interest in publishing it, as well. I receive loads of inquiries from people who need their license back and because of the scope of my writings about license appeals on both this blog and my website, see me as rather dominant in this area of practice. Add my guarantee to all that, and they figure, “He’s the guy!” And I am, at least if you’ve honestly quit drinking. Yet no matter how many times I repeat “you must be sober,” many people don’t read anything beyond my guarantee, or don’t do more than size up how much I’ve written and contact my office explaining how much they need a license, or how long they’ve been without one, never also mentioning that they’ve been sober for X number of years. Truth be told, most (but certainly not all) of the time a qualified candidate for my services contacts us, we don’t have to ask how long he or she has gone without a drink. Many of them offer that information right out of the gate. These people have read enough about the process to understand that getting sober is the key to winning a license restoration or clearance case.

Thus, my self-serving interest here is to reduce the number of inquiries from people who haven’t made the commitment to stop drinking for good. Beyond someone merely saying they have or have not quit, the markers of real sobriety often rather obvious. Even when they’re not, we use that “skill” I mentioned a couple of paragraphs before, just as the hearing officers use their knowledge and experience, to uncover whether a person really has undergone the profound transformation involved in going from drinker to non-drinker. When a person really does “put the plug in the jug,” so to speak, his or her life usually changes so dramatically that it just cannot be faked. To be blunt about it, only a dumba$$ will think he or she can really fake having hit bottom and then getting, and ultimately staying, sober. If it was just as easy as someone saying that he or she has quit drinking, then this wouldn’t be called the license appeal process.

So, what’s our grand takeaway here? That you must have really, truly and honestly quit drinking to win a license appeal. I have the same requirement to accept a case, because I guarantee to win every one I take. Yet for everything I’ve written here, I would NEVER want to discourage anyone from calling my office, even if it’s just to perhaps help him or her make the decision to finally quit drinking. I’m NOT interested arguing the law; in other words, the process is what it is and you really must be sober to win. As unfair that may seem in your situation, well, that’s your problem. My integrity is not for sale, and I will not take a case for anyone who still drinks, or even thinks he or she can drink again. The whole system has been designed to keep people who think like that from ever getting back on the road. However, maybe there’s something I can say, or some insight I can provide, that helps a person tip the scales in favor of not drinking anymore, and if I can do that, then I will consider myself honored to have helped.

If you have lost your license for multiple DUI’s, have really quit drinking, and are looking to hire a lawyer to win it back, I do that. If I take your case, I guarantee that I’ll win it, period. Do your homework, read around, and be a smart consumer. Then, when you’re ready to get back behind the wheel, call my office. All of my consultations are confidential, free, and done over the phone, right when you call. You can reach us Monday through Friday, from 8:30 a.m. until 5:00 p.m. (EST) at 586-465-1980. We’re here to help.