The “meat and potatoes” of a Michigan driver’s license restoration or clearance case requires proving that you’ve quit drinking and will remain sober. In this article, I want to explore that in a way that makes sense to those readers who have made the transition from drinker to non-drinker. Many sober people simply “put the plug in the jug,” so to speak, and then get on with life, too busy to think about all this. Instead, these folks  “just do it” and move forward. Given that most of my clients are NOT active in AA, there is often little reason to sit down and analyze one’s own recovery, as opposed to just getting on with it. 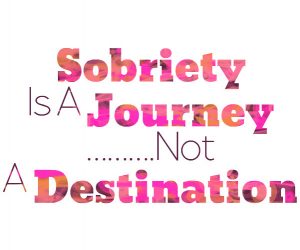 What I want to make clear here that, for as complicated as a license appeal and all this sobriety stuff can be, if you have genuinely quit drinking, then that’s all you need, and I can win your license back, guaranteed. The 2 main issues to be proven in a license appeal are, first, that your alcohol problem is “under control,” meaning that you have been sober for a certain minimum period of time, and second, that it is “likely to remain under control,” which essentially means that you’re a safe bet to never drink again.

From a purely legal point of view, the hearing officers who decide these cases must (and do) know about addiction and alcohol problems, and understand some basic points about the diagnosis of and recovery from them. In other words, they need to know about recovery. Knowing about something, however, is different from actually knowing it, as in having lived it.

For example, each and every one of us knows about different races of people, but none of us knows what it’s like to be a different race. The world’s foremost expert on cancer knows more about it than anyone, but he or she will never really know cancer without actually getting the disease.

The irony here, and it’s important, is that you don’t need to be an expert in the subject of recovery to have actually gone through it and become sober. For many people, it’s a matter of just putting down the bottle and getting back into the game of life.

A key part of my role as a license restoration lawyer is to help my clients look back on their decision to quit drinking and the profound life changes that followed, and cast those events into the framework of a license appeal in a way that’s understandable to those who know about recovery, but don’t actually know it – the hearing officers.

While some people do observe, in the moment, how their lives change as they work to become alcohol-free, others simply work more, and talk less, while they just plow through those life changes. Either way, once a person has racked up some genuine sober time, it is rather easy to look back and see the stark contrast between how life has become without alcohol, from how it used to be with it.

In every case, a sober person’s life does get better, and its trajectory rises dramatically. Sober people get promoted at work, or get better jobs, or complete degrees or other training; they stop wasting money and time on drinking and fixing the problems it creates, and they otherwise experience a huge upgrade in just about every measurable aspect of their lives.

This is were we can rather easily sort the cherries from the pits, because anyone who cannot enthusiastically point out how his or her life has improved since quitting drinking isn’t really sober yet. Such a person may be completely abstinent from alcohol, but there is a huge difference between mere abstinence and real sobriety. All sober people are abstinent, but not all abstinent people are sober. Let’s explore this a bit more…

To be sure, it’s not like quitting drinking instantly makes everything better and suddenly pays off all your bills and makes you rich, but life does start to improve rather quickly once you’ve taken action to not pick up again. First, the physical body itself begins to feel better, and most notably after 30 days. Second, the mind begins to clear. Some of this may be chemical, but some of it is undoubtedly due to having a clear focus and establishing goals, as well.

As anyone who has gone through this knows, quitting drinking is about a lot more than just quitting drinking. In other words, to quit, and stay quit, requires some very substantial life changes. You don’t keep hanging out with the party friends, keep booze in the house, and spend your time at the bar thinking the only thing that’s going to be different is that you’ll drink Diet Coke, instead.

When you really quit drinking, you change everything, from where you go. to who you hang with, to what you do with your time.

The honest truth is that quitting drinking can suck, at least early on. No one quits drinking because it’s working out so well, but for many people, it’s all they know, or the only way they know to socialize or spend their time. The first few days without the comfort of anything you know well (including drinking) can be frustrating.

You wonder, will you ever have fun again? Does this mean you’ll spend the rest of your life alone and bored, or otherwise not knowing what to do?

Even people who go through an IOP (Intensive Outpatient Program) and attend AA will eventually have to go home without and get through the first few nights without their old routine. Less frequent drinkers may not have quite the same problem, but it still takes time to adjust to anything significantly different in one’s life, and quitting drinking is no different.

The key is that you DO adjust. It happens, and it doesn’t take that long, either. As the weeks roll on, you get busy with life. You regain the respect and trust of the people who matter to you. You ditch the drinking friends and realize they weren’t really friends, anyway.

Perhaps most important, you begin to actually do things. Some people take up hobbies, or get into exercise, while others just begin to become real participants in life and life’s events. Whether it’s something intense, like building model airplanes in the basement, or something more passive, like playing video games or just watching TV, the point is that you begin to do a lot more than just wast time drinking and talking the same BS with the same people.

If you were a solo drinker, this experience is largely the same, except that instead of disappearing with a bottle, you may become more social now than before, or just otherwise find stuff to do, like get busier around the house. Even if all you ever did then and do now is just watch TV, at least you can remember it!

For most people who do get sober, the work involved is, in large part, a solo project. Of course, most people have done some kind of counseling or treatment, and maybe even some AA, but the truth is that most do manage to stay sober on their own, and with the help of friends and family.

This is important to me as a driver’s license restoration lawyer, because sobriety is NOT dependent on AA. There is a misconception that a person must be in AA to win a license appeal, and just so I’m clear, it is absolutely, 100% wrong.

In fact, the week this article was written, I met with a new client who had lost his previous license appeal because he had hired some lawyer who told him to start going to AA because it would help his case, so he did, but since he wasn’t really into it, he didn’t convince the hearing officer. The guy had previously gone to AA under court order, but then stopped when it was no longer required because, quite frankly, the program just wasn’t for him.

To be honest, most people tell me that. Anyway, this new client was relieved to find out that we’ll win his license back without him having to pretend that he goes or is otherwise “into” AA when he’s not. The key to winning a license appeal is that you are genuinely sober, and it doesn’t mater whether that’s because you attend some kind of support group, do sober yoga, or do nothing at all except not drink anymore.

I speak with authority on this because I guarantee to win every license appeal case I take. The main requirement for me to accept a case is that the you must be genuinely sober. Because I both know and know about sobriety, I understand that people come to it from many different paths.

The key is that when we go into that hearing room, you can look the hearing officer in the eye and talk about how your life has changed since and because you quit drinking. If you go to AA, then you’ve undoubtedly become used to talking about this, and have a better handle on your recovery as an actual story. If you’ve never been to AA, then you may not have had the perspective and words to describe your journey from drinker to non-drinker, but you’ve still gone through it, all the same.

This is where I help, and this is what I do, all day, everyday. If you hire me, I will win your case, guaranteed.

Sobriety is a truly deep subject, and this article really only scratches the surface. Even so, it’s a good litmus test for those who really “get it” because what we’ve covered here will either resonate with you, or not. If you identify with what I’ve covered, then you’re probably ready to go, as long as your otherwise eligible.

If our discussion doesn’t make much sense or otherwise reflect some of what you’ve gone through, then you may not yet have crossed that line between mere abstinence and real sobriety. That’s not a bad thing, and I would encourage you to keep up the good work.

For those looking to win back their driver’s license, however, or who need to clear a Michigan “hold” on their driving record, we’re going to have to show how your abstinence grew into sobriety, and how your life has changed as a result.

If you are looking to hire a lawyer to get you back on the road, and you really have quit drinking, then I can help. All of our consultations are free,  confidential and done over the phone, right when you call. My team and I are very friendly people who will be glad to answer your questions and explain things.