For everything that has been and can be written about Michigan driver’s license restoration and clearance appeals (and there is a lot), all of it can be reduced to one word: Sobriety.  Sobriety is not only the key to winning your license back, it is the foundation (the real meat and potatoes) of the license appeal process; it is the first and a necessary requirement to beginning that process and, very often, the motivator for those who are truly inspired to improve their lives. 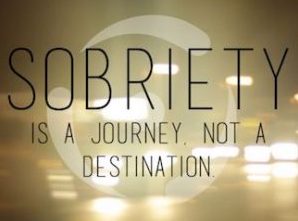 To put that another way, while it is understood that everybody “needs” a license, when people get sober, their lives get better; they do things like get married, have kids, and get better jobs.  As their responsibilities in the world rise (a direct result of not drinking anymore), they not only need a license, but want one to ride the wave of their life getting better.  In that sense, sobriety is the cause for life getting better, and that, in turn, becomes the cause for the need to get back on the road.

In my numerous writings about the license appeal process, I am very clear that I will only take cases for people who are genuinely sober.  That’s not just some standard that I set.  The whole license restoration system is really focused on that single point; people who have honestly quit drinking for good are no risk to drink and drive again.  Anyone who is seen as a risk to pick up a drink again is also seen as an unacceptable risk to drink and drive again.

The Michigan Secretary of State has drawn a line in the sand, and it separates non-drinkers from everyone else.  I could have just as easily said “drinkers from non-drinkers,” but that’s the kind of wordplay some people try to use as they argue that they don’t really “drink” very much, and, as such, aren’t really “drinkers” anymore.  They’ll insist that they can manage to enjoy the occasional glass of wine with dinner or such, once in a while, without risk.

The Michigan license reinstatement rules and the court cases interpreting them (and, most importantly, the hearing officers who apply all that to real life cases and make the real-world decisions about who wins and who loses) don’t allow for any of that.  No one in the state system buys the “once in a while” thing about drinking, and the rules specifically forbid anyone who still drinks, however infrequently, from winning their license back.

The only people who will even be considered for re-licensure are those who can prove that they have completely given up drinking, and who really mean to stay sober for life.

That last part is important, because plenty of people will figure out enough about the license restoration process to know that the only chance to win back the ability to drive is to convince the state that they won’t drink again.  If it was just as easy as saying so, I’d almost be out of a job, and all anyone would have to do is keep a straight face and tell the hearing officer that they’ve quit drinking for good.  The whole point of the appeal process is to make people prove that they are genuinely sober, and for the AHS hearing officers to sniff out those who are just saying it from those who really mean it.

What’s more, since the overriding concern is to make sure that no one who is seen as a risk to ever drink again wins his or her case, it is understood that plenty of genuinely sober people will get denied.  This is just the price for setting the bar so high.  The idea here is that even if a person who has honestly quit drinking gets denied a time or two, they’ll eventually get the right help to be able to prove their sobriety.  And that’s where I come in…

If there’s one rather obvious thing that sets my blog articles and my site apart from everything else out there, it’s my focus on sobriety.  License appeals are governed by rules, and in that sense, they are legal, mechanical, and even technical.  But for all of that, there is a “soul” to the whole process, and that’s sobriety.  You can take any song and break it down into measures and notes, but when you’re talking about the kind of music that really moves you, none of that really captures the “soul.”  Anyone can sing a James Brown tune, but only James Brown can really “sing” it.  Get what I mean?

The process of getting sober can be broken down into its constituent parts, but as anyone who has really undergone the profound transformation from drinker to non-drinker knows, there is also something special – something magical (some even say spiritual) – about that point in life when a person has his or her light bulb (epiphany) moment and really decides to quit.  No one quits drinking because they’ve filled out a balance sheet comparing the benefits of drinking to the benefits of quitting and added up more points on the “quit” side than the “continue” side.

In fact, people caught up in the struggle with alcohol will continue to drink even though they know there are a million reasons to stop and not a single damn good one to continue.  Instead, something inside goes “poof!” and the whole equation just flips.  AA people call this getting “sick and tired of being sick and tired.”  It’s not a purely intellectual decision that causes a person to stop drinking.  There is, in most cases, something deeply emotional that finally stirs a person’s soul to stop drinking.  You can’t really see it, and you can’t put a name on it, but it is what makes the day you quit drinking for good different from all the days before, and it’s an absolutely real thing.

It is this that I help my client capture in words so that we win his or her license appeal, because when it’s properly presented to the hearing officer, there can be no doubt about a person’s sobriety, or commitment to it.  People who have not had this experience can’t fake it, at least not in the way I go about proving it.

You can’t really do this anywhere near as well as me if you don’t understand sobriety from every angle.  I know it from the inside out and from the outside looking in.  And while I understand it legally, and clinically, as well (I completed a post-graduate program of addiction studies), it is that connection with the “soul” of sobriety that makes it come alive to me.

My guarantee to win each case I take is not a marketing ploy, nor is it cockiness.  It’s the result of confidence.  When I respond to an email about getting someone’s license back, I almost always mention sobriety in my first reply.  My office gets countless calls about license appeals every day because, as I noted, everyone “needs” a license, but the truth is that most people who want their license back aren’t sober.  It is a minority of people who manage any kind of long-term sobriety (in the world of academia, it is understood that better than 95% of all alcoholics don’t recover; 3 out of 4 never get any help for their drinking, and the average alcoholic dies a statistical average of 26 years earlier than he or she otherwise would have).

I decline representation on behalf of those who haven’t yet quit drinking for good.  If you’re sober, I can get your license back.  If you haven’t quit drinking, I won’t take your “case,”, although I’m glad to speak to you or anyone to help tip the decisional balance (tip the scales, so to speak) in favor of quitting.  Even if you’re not there yet, I’m glad to offer what I can by way of inspiration to help you finally put the plug in the jug.

The Michigan Secretary of State’s Administrative Hearing Section (AHS) follows the rules made for it in trying to determine if a person has really quit drinking for good.  I know these rules like the back of my hand, and while missing any part of them can prove fatal to a license appeal case, I believe that beyond just observing them, a winning case is made out by showing that a person really has that “soul” of recovery and sobriety.  This is where my deeper understanding of sobriety matters.  I think it matters a lot that I truly understand what you’ve gone through.  No one decides to stop drinking because it’s working out so well.  No one goes into AA or counseling on a roll.

For all of the people who go to AA or counseling, sometimes again and again, most never get better.  Many people get better without AA.  However it happens, those that do get sober, those who really “get it,” know that there is something different about any past attempts to quit that didn’t stick as opposed to one time it did.  I like to say that a person only really quits drinking one time – the last time.  It is capturing the essence of this life-changing experience and explaining your recovery story within the framework of the state’s license appeal rules to show the true spirit of your recovery that will win your license back, and allows me to guarantee it in every case I take.

Sobriety is a necessary prerequisite to filing a license appeal.  It is also the foundation of a license appeal case, the focus of the entire process, and, often enough, the catalyst for someone to get the ball rolling in the first place.  Sobriety is also a process, and a goal, and a mindset.  It is a way of life, and outlook on life, and, for those who ultimately “get it,” a state of being.

If you have it, consider yourself lucky.  If you need it, or want it, but aren’t quite there yet, NEVER stop trying to get it.  It’s worth the effort, and most people have to try again and again before they finally get it.  As the old saying goes, nothing good comes easy.

If you need to win a Michigan driver’s license restoration or clearance appeal and you have honestly quit drinking, I can get you back on the road.  Do your homework, read the articles other lawyers have written, and narrow down the field of contenders.  Then, call around.  All of my consultations are done over the phone, right when you call.  My office can be reached Monday through Friday, from 8:30 a.m. until 5:00 p.m. (EST) at 586-465-1980.  We’re here to help.