To file a Michigan driver’s license restoration or clearance case with the Michigan Secretary of State’s Administrative Hearing Section (AHS), you need to submit certain evidence.  In the last article in what I’m calling this “loose series” (LS) about license appeals, we looked at the substance use evaluation (SUE), and described it as essentially being the foundation of license restoration and clearance cases.  In this piece, we’ll turn to the other major required evidentiary component required in every case, the letters of support. The SUE and the support letters are almost like bookends in this process, and are the 2 supporting pillars of your case. 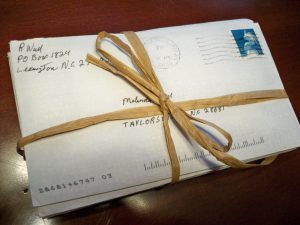 As I’ve pointed out, license appeals require proving 2 primary issues: first, that your alcohol problem is “under control,” meaning that you can fix a date since you last drank, and second, that your alcohol problem is “likely to remain under control,” meaning that you can show you’re a safe bet to not drink again. It’s that fist issue that concerns us here – that you’ve stopped drinking, and it’s the letters of support that are the primary evidence submitted to prove it.

In the course of my practice, I review and edit well over 500 letters of support per year.  I can honestly say that over 95% of them need help.  To put this another way, of the 500-plus support letters I read annually, only about 25 (that’s about 2 each month) are good enough “as is.”  As a result, I live in a world surrounded by red pens.  I point this out because there is almost no way for anyone to get the letters “right” without the help of substantial editing.

I provide my clients with a sample or template letter in the folder I give out at our first meeting, but I also explain that all the letters need to come back to me in rough draft form, and that the client should expect all of them returned with suggested edits, usually in red ink.  Getting letters of support in good enough shape to be filed takes a lot of work, and most of it is on my part.  That, of course, is part of what you’re paying for.

It’s much easier to discuss what the letters are not, and should not be, rather than how they should be written.  Besides, it’s no secret that lots of other lawyers use my blog and resources to help with license restoration issues.  I field plenty of calls from attorneys around the state who’ve gotten stuck on some point or other, and while I’m flattered, and glad to help, I’m not about to give away the proprietary formula I use in revising my client’s support letters anymore that Busch’s Baked Beans or KFC is about to give away their secret recipes, either.

The one thing I can say is that if there is any universal constant to that underlying formula, it’s that the letters have to be genuine.  Better letters are better in every sense, and not only stand as support for a person’s sobriety, but often enough either detail a person’s transition from drinker to non-drinker, or, as in the case of someone who didn’t know the person before he or she quit drinking, at least extoll the depth of the person’s commitment to remaining alcohol-free.  Good support letters are far more complex than what a colleague of mine calls “good guy letters.”

There are a few common mistakes in rough draft support letters, and they show up no matter what kind of “example” letters are given out.  It’s like people can’t help themselves when they get to writing:

The first, and most common mistake is that the letters become testimonials to a person’s character.  The fact that Sober Sam is a good guy, or that Sober Sally is a good gal, is of no relevance whatsoever in a support letter.

Snake the Biker may be the meanest guy around, but if his support letters detail his abstinence from alcohol well enough, then they’ll help him win his license back.  Of course, it’s not all black and white.

Sally may be wonderful woman, and while that, standing alone, is of no help, if it is offered in the context of a juxtaposition between the old, unlikable drinking Sally and the new, sober, loving Sally, then it has some evidentiary value.

In general, the “good guy” letters aren’t really worth the paper they’re printed on.

The second most common mistake that sabotages letters of support occurs when the writer tries to explain how much the subject needs a license.  As one hearing officer puts it, “Everybody needs a license.”  The fact that Jill the Job Hunter has missed out on dozens of opportunities because she cannot drive is of precisely zero value to the hearing officer deciding the case.

In that same way, the idea that a person will be able to score the career of a lifetime if he or she is allowed to drive again  does nothing to help the case.  The state doesn’t care because the license appeal process itself has no component for caring.  If you had been in the desert for 3 days without water, were seconds away from dying of dehydration, and found yourself in front of a vending machine that sold water, it couldn’t care less about your situation because it has no mechanism to care.  The only way to get water is to to put your dollar in the slot.

“Needing” a license has nothing to do with being able to win a license appeal.

In a distant third place for mistakes that need to be edited out of sport letters comes the writer’s judgment that the subject should get his or her license back, or a too-strong plea made to the hearing officer to grant the appeal.  These letters are testimonial, and they’re supposed to be testimony about a person not drinking.  Going beyond that limited purpose not only fails to help at all, but can complicate things.

It is the hearing officer’s job to decide the case.  It’s fine if a parent slips a line in a letter to the effect that they hope their son or daughter wins, but it is not fine to go on and on about how the son or daughter deserves a license.  While those are understandable sentiments, they do NOT bring any light on the issue of whether that son or daughter has stopped drinking, since when, and what the letter writer has observed and otherwise knows of that.

Letters are supposed to provide an accurate picture of the person about whom they are written.

I point this out because the state expects as much.  I would be lying if I didn’t admit to having been asked to actually write the letters on a few occasions.  Of course, I must decline that for a multitude of reasons, not the least of which is that I don’t live in my client’s world.  Even if my client is another lawyer, I don’t hang around with him or her.  And there, really, we have it: letters do and should come from the people with whom you hang out, or who know you, and the world you live in.

The process of editing the letters takes a lot of time.  It can be a source of frustration that it takes me a while to get it done, but I have certain standards I keep in order to do the job well.  I do not, for example, edit a letter here and another there.  Before I pick up my pen to start, I read my client’s entire file first.  I have to know the case, and have freshly read my checklist and his or her evaluation before I get into what the letter writers have to say.

In addition, I have to be fresh.  Remember, I have a guarantee at stake here, so the quality of my work is on the line.  I will not just do a file to get it out of the way.

For example, by the time a regular workday is over for me, I don’t have enough energy or focus to do the kind of job I want to do when reviewing and editing letters.  If I find myself having some time during the day at the office because an appointment reschedules, that’s one thing, but normally, I work on the files when I have a gap in time during, but not after, regular hours.  It’s not like I cut my workday off at 5 or 6; I’m often still working and answering emails until 9 or 10 o’clock at night, but that doesn’t require the same focus that must be given to the letters.

Also, it has always been my rule that I will never start on the letters unless I know I can finish them all in one sitting.  Nothing would be worse than to start work on a case, get called away, and come back later, only to forget or overlook something inconsistent in one letter with what’s been stated in a previous letter.  By doing all the letters at once, I don’t have to worry about that.  The bottom line here is that this is a very important job and needs to be treated as such, and that’s exactly what i do.

When I’ve finished with my edits, the letters are sent back to the client (letters can be emailed/scanned, faxed or mailed back and forth; whatever works best for the client works best for me) to be reviewed and corrected accordingly.  If a suggested edit isn’t accurate or truthful, then I expect a call from the client so we can figure out what to do.  At the end of the day, the letters have to be honest, and although that’s almost never an issue, I make sure they are.

Finally, before the final copies are sent back to me, the letters have to be notarized.  Once that’s done, we’re ready to go.  In combination with the SUE, the letters of support make up the second half of the evidentiary package we submit to file and formally begin a license restoration or clearance case.  Of course, everything is checked, and then re-checked before it’s submitted.  My first time win guarantee means that I want to win as much as my client does, and that I’m equally invested in making sure we do.

In our next installment, we’ll begin looking at the people, rules, and steps that make up the rest of the license appeal process.