This will be the final installment in our non-consecutive, and what I’ve called “loose series (LS)” about the Michigan driver’s license restoration and clearance process. Up to now, I’ve covered every step in that process, starting with my first, 3-hour meeting (LS1) with a new client, the substance use evaluation(LS2), or SUE (often mistakenly called the “substance abuse evaluation), the letters of support (LS3) that must also be filed with the case, the standard of proof (LS4), meaning how the evidence is evaluated, the hearing officers (LS5) who decide these cases, the live hearing (LS6) and what takes place there, the all-important prep session (LS7) to get ready for it, the kind of license you win (LS8) if you filed for a restoration, rather than a clearance, and the dreaded ignition interlock violation (LS9) for some non-compliance or problem while using the device. Although there are no more steps in the process left to examine, there is one aspect of license appeals that is foundational to every one of them, and really at the core of everything: sobriety. 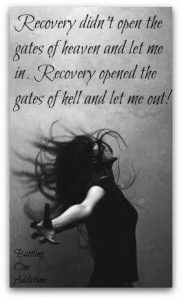 Sobriety is so important to a license appeal that you could say it is everything. In fact, it is. On my website, I call it the “meat and potatoes” of winning back your license. To really gain a sense of it’s importance, we need to back up a bit, for perspective, and look at the big picture. When a person loses his or her driver’s license for multiple DUI’s, the state concludes he or she has a drinking problem. Key here is the word “conclude.” There is no debating this, and the Secretary of State won’t even listen to why anyone thinks he or she is an exception to that. As a result, when a person comes back and appeals to the Michigan Secretary of State for a license, no matter how many years later, the threshold inquiry is about what they have done to fix that drinking problem, as is get clean and sober, and not whether there is or was one. In the view of the state, anyone with multiple substance-abuse related driving offenses is seen as too much of a risk to put back on the road unless they have completely quit drinking and/or using drugs. This means that the ONLY people who will ever get their licenses back are those who no longer drink, and have been and plan to continue living an alcohol (and drug) free lifestyle. The indisputable, simple fact is that people who do not drink anymore are ZERO risk to ever drink and drive again.

This is it, folks – the keys to the kingdom, so to speak. Absolutely nothing else matters in a license reinstatement case if you’re not sober. It couldn’t matter less if you haven’t been in trouble for over 20 years and have a very sick child who needs to be driven to medical treatment to survive – unless you can first prove your sobriety, your case is not even legally qualified for consideration. Needing a license, not having had one for a long time, or having stayed out of trouble, even for decades, is completely and utterly meaningless in the context of winning a Michigan driver’s license restoration or clearance appeal without also being able to demonstrate that you’ve quit drinking for good.

There’s more to it, of course. It’s a humbling experience to get sober, and usually, when a person undergoes this transformation, his or her whole attitude changes for the better. We all know the world is full of a$$holes, but when someone claiming to be sober acts like a real jerk, you can’t help but wonder if he or she really has quit drinking. That better attitude usually extends to every corner of a person’s life, so that a genuinely sober person approaches the license appeal process with hope and respect, rather than anger and impatience. Seriously, you can often just tell someone is NOT sober within a few words, even within an email.

Inevitably, some people figure out at least this much about the license appeal process and think they can “wing” the sobriety thing enough to win. Within this group, many misunderstand the term “sober.” I hear from plenty of people who claim that things are different, and that now they can have the occasional drink. They’ll say they don’t drink like they used to, and that they’ve somehow morphed into responsible, social drinkers, or that they rarely drink at all. They’ll insist that, no matter what, they will never drink and drive again. This is all a non-starter for the Secretary of State, and let me be perfectly clear from my end, as well: I am ONLY interested in taking a case for someone who has completely stopped drinking. I’ll be glad to speak with anyone who’s not there yet, and will do what I can to help tip the balance in favor of quitting altogether, but I won’t file an appeal for anyone who is not genuinely sober. To be clearer still, “sober” means you’ve not only quit drinking, but intend to remain alcohol-free for the rest of your life.

Other people may understand that they’re not truly sober, but figure they can fake it well enough to fool the Secretary of State’s Administrative Hearing Section (AHS) hearing officers. Have fun with that, and understand I want no part of it, or anything like it. These hearing officers spend all day, every day, sorting out the dedicated, sober, non-drinkers from everyone else. They’re good at what they do, and they know, up front, that they are going to be lied to all the time. It sure helps, but you don’t have to be an expert to tell the fakers from the genuinely sober people, either. I can spot the real thing a mile away. That whole change in attitude is just part of what a person undergoes as he or she transforms from drinker to non-drinker. When a person gets sober, almost everything about him or her changes, and all for the better. You can stand back and watch the trajectory of a person’s life rise as they earn back the trust and respect of those who matter to them. They begin to feel better physically, mentally and emotionally. Sober people move forward and up in life, and do things like complete unfinished degrees, or get better jobs, or get promoted and recognized at the job they already have. They meet new partners and form healthy relationships, and have families and save money and just all around improve their lives. The comparison between a person’s life when they were drinking to what it is like after they quit are stark, and unmistakable.

When it comes to describing all these things, you just can’t fake it. People who aren’t sober have simply not experienced this kind of joy and improved outlook, so they can’t talk about it from the heart. This is huge. Either you’re sober, or you’re not. I’m not naive enough to believe no one has ever fooled the state before, or that some people who have quit drinking won’t pick up again and relapse, but I’d argue that they were never really “sober” in the first place. I know true sobriety when I see it, and so does the state.

If just being sober was enough to win your licenses back, however, well, I’d be out of work. You have to prove that sobriety, and prove it within the framework and specific rules of the license appeal process. That’s where I come in. I do this stuff all day, every day, and have enough confidence in my abilities to guarantee to win every license appeal case I take. First, though, I require genuine sobriety.

When you think about it, this really only makes sense. The state cannot be concerned with how badly someone “needs” to drive, especially when they lost the ability to do so for repeated getting busted for drunk driving. The state isn’t unforgiving, though, and has carved out a way for such people to get back on the road, but it draws the line at drinking. Non-drinkers won’t drive drunk, so only non-drinkers will ever be able to win back their license. Of course, the state knows that plenty of people will show up and say they don’t drink anymore, so the process has been designed to really separate those who have genuinely quit drinking for good from everyone else.

I know how to navigate that system and prove sobriety in a way that wins licenses back, but that, of course, requires a client who is genuinely sober. If you have quit drinking and need to win your license back, or obtain the clearance of a Michigan “hold” on your driving record, I can do that for you. All of my consultations are done over the phone, right when you call. My office can be reached Monday through Friday, from 8:30 a.m. until 5:00 p.m. (EST) at 586-465-1980. We’re here to help