In our roles as Michigan driver’s license restoration lawyers, we are frequently contacted by people who have tried a “do-it-yourself” appeal, or who hired some lawyer who claimed to “do” license reinstatement cases, and lost. This article will examine something most people don’t know about – that all license appeals begin with a “NO” answer. A big source of frustration among many people who have lost is the fact that they actually are sober – in other words, they have the key ingredient the Michigan Secretary of State looks for in every case – but that their appeal was nevertheless denied. 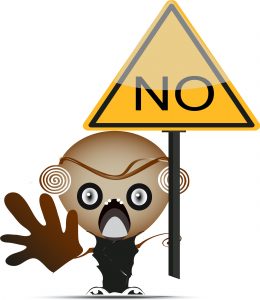 In fact, the day before this article was written, I received just such a contact (I’ll reprint it below), and that made me think that neither this person nor their lawyer understood simple but profound implication of a key passage in the main license appeal rule: “The hearing officer shall not order that a license be issued to the petitioner unless the petitioner proves, by clear and convincing evidence, all of the following…” Although it seems straightforward, this wording is very easy to overlook, or not fully understand – except by lawyers, like us, who concentrate their practice in license restoration and clearance cases.

For as much as we can say about this provision of the law, it all turns on those 2 key words: shall not. The significance of that phrase cannot be overstated, because it amounts to a directive and instruction to the hearing officer to NOT grant a license appeal unless the person who has filed it hits certain markers. This is a very different protocol than is used in any other legal setting, where, no matter what the standard of proof, a case begins with what we could described as the scales of justice evenly balanced. In license appeals, the scales are tipped firmly to the “no” side, and to win, a person must tip them all the way to the “yes” side.

Although we’re using the “scales of justice” as kind of analogy or verbal illustration here, it does help visualize them in the context of what we’re talking about:

When someone walks into court facing a criminal charge, like a DUI, those imaginary scales are tilted to the side of “innocent.” The standard of proof required to convict someone of a crime is “beyond a reasonable doubt.” This means the scales have to tilt from the “innocent” sider, past the middle, and far enough to the “guilty” side to be considered “beyond a reasonable doubt.”

If a person files a lawsuit for personal injury, the matter starts out, again, with the scales evenly balanced, not in favor of either party. The standard of proof in civil cases is a “preponderance of the evidence,” meaning that whoever tilts them just past the halfway point to his or her side wins.

In a license restoration appeal, a case starts out with the scales weighted all the way down on the “no” side. As the opening language of the rule, (Rule 13) makes clear, the standard of proof needed to win is“clear and convincing evidence.”

This means that a person not only has to pile up enough evidence to tip the scales all the way from “no” to the halfway point, but must thereafter keep piling on even more, in order to tip them past midway, almost all the way down on the “yes” side.

The “shall not” language of the main license appeal rule means the hearing officer is instructed to deny the appeal unless, to put it in baseball terms, the person hits a home run. The hearing officer is therefore directed, not to start off with a neutral mindset, but rather to begin with the idea that he or she WILL deny the appeal unless the evidence presented is “clear and convincing” in the client’s favor.

In a very real way, “clear and convincing” is very much like “home run.”

To put this another way, the hearing officer isn’t looking at the 99 things with a person’s appeal that are right; instead, the rule directs him or her to look fo the 1 thing that’s wrong with it.

When you think about an airplane crashing (I know this is a horrible thought, but stay with me for bit…), that doesn’t happen because 99.9% of the mechanical parts were working properly, it goes down because of the 1 thing that wasn’t.

The Michigan Secretary of State operates on the belief that its job is to screen everyone who files a license appeal to make sure that it NEVER puts a person back on the road who is any kind of risk to injure or kill someone by driving drunk (again).

The hearing officer’s job is to look deep for any sign of such risk, not just wait for something big to jump out at them.

If I seem to be making a really big deal out of this, I AM. The simple truth is that there is no other legal proceeding that begins with a negative instruction to the person deciding it.

Here’s that email I referenced at the outset.  I have reprinted it below exactly as it was written, except that I have redacted (X’s out) any potentially personally identifying information:

Given what’s at stake (the safety of everyone else on the road), the whole “we start out at no” position isn’t unfair or harsh, or in any way “over the top.” A little perspective may help here, so let’s look at a larger portion (what is essentially the key part) of Rule 13, which establishes how license restoration and clearance cases should be decided:

While just about every word in this section is important, there are 4 things within it that are foundational, and they all begin with and are dependent on the negative (“shall not”) language that opens the rule. Let’s translate all that legalese from above into plain English:

1. The hearing officer’s instruction is to NOT grant an appeal, unless –

2. The person presents evidence that is “clear and convincing” to prove that –

3. His or her alcohol problem is “under control,” which means that he or she has been completely abstinent from alcohol for a legally sufficient period of time (the precise amount of which can vary from case to case, but in our practice we generally require a person to have been alcohol-free for at least 18 months) and

4. His or her alcohol problem is “likely to remain under control,” which equates to showing the person has both the ability and commitment to never drink again.

Underlying the license appeal process is the fact that anyone who has lost his or her license after racking up 2 or more DUI’s is, by law, categorized as a “habitual alcohol offender,” and, as such, is presumed to have some kind of problem with alcohol.

Accordingly, such people, whatever that problem is or isn’t, are seen as just being too much of a risk to put back on the road as long as they have ANY relationship to alcohol whatsoever.

In other words, to win a license appeal, a person must prove that he or she has quit drinking, hasn’t had a drink for a “long enough” period of time, and is otherwise a safe bet to never drink again.

It is a simple, indisputable fact that people who don’t drink are exactly ZERO risk to ever drink and drive.

Accordingly, the law provides that these are the only people who can win back their licenses.

The unfortunate fact is that, in the real world, most people looking to get back on the road haven’t completely quit drinking and embraced a sober lifestyle. This, then, requires the hearing officers to have to separate out a minority of people who have actually given up alcohol from the larger number who haven’t.

Thus, rather than beginning a license appeal case with a open mind and the scales balanced evenly, each case start out with the decision being a firm “no,” thereby requiring a person to pile on enough evidence to really leave no doubt that he or she has been abstinent for that “legally sufficient” period of time, and that he or she is unlikely to ever drink again in order to change it to “yes.”

Accordingly, license appeals aARE tough, because they’re designed to be tough. The thinking that went into making the rules what they are is consistent with the idea that it’s far better to deny a genuinely sober person’s case any number of times simply because his or her proof wasn’t strong enough than it is to EVER put someone back on the road who might drink and drive again.

If you are looking to hire a lawyer to win back your driver’s license, or obtain a clearance of the Michigan hold on your driving record so that you can get a license in another state, be a good consumer and do your homework. Read around, and see how lawyers explain the license appeal process, and how they explain their approach to it. See if and how they understand recovery and sobriety, and the various ways people can and do recover in the real world (more often than not, without AA).

When you’ve done enough of that, start checking around. You can learn a lot by actually speaking with a live person. All of our consultations are free, confidential, and done over the phone, right when you call. My team and I are very friendly people who will be glad to answer your questions, explain things, and even compare notes with anything some other lawyer has told you.

Remember, we guarantee to win every restoration and clearance appeal case we take.