In our role as Michigan driver’s license restoration lawyers, my team and I are contacted every day by people whose cases have recently been denied. Many of those who call us are “do-it-yourselfers” who live here, in Michigan, while others live out of state and took a shot at an administrative appeal on their own. Some even had hired a lawyer (NOT us), but no matter what, these callers all have one thing in common: They lost. Once they receive the notice of their denial, the first thing they all want to know is if there is anything that can be done to fix whatever went wrong. 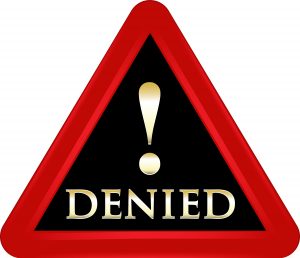 While the answer is a definite “maybe,” what’s even more important is the reality that, in the overwhelming majority of cases that are denied, something did, indeed, go wrong with how the case was prepared, handled, and/or presented. We’ll break down who can “appeal” a loss, and how, later in this article, but for now, what’s more important is to take a step back and recognize that, with very few exceptions, a driver’s license appeal case gets denied because it simply wasn’t good enough to win. Very few losing decisions are ever overturned in court.

The denial of a case may (or may not) reflect on the person who filed it every bit as much as it may or may not be a result of the way his or her case was managed. For example, a person may be truly sober and otherwise qualified to win, but wind up getting denied because his or her case wasn’t carefully prepared, or not properly presented. On the flip side, a person may simply NOT meet the Secretary of State’s requirements to win, meaning that no lawyer, no amount of preparation, nor any approach to presenting the case could have produced a successful outcome.

And it’s right there that we run head-first into a key issue in every potential license restoration case: Do you have what it takes to win?

Are you really sober? Have you honestly given up drinking, and do you intend to remain alcohol-free for the rest of your life?

That’s what it takes to win.

The cold, hard truth is that most losing decisions people get are correct, even though they’re also disappointing. Of course, everyone who files a license appeal thinks they should win, but that’s not how license appeals work. In the real world, people can feel very strongly about things they think are important, but that doesn’t make any of them relevant.

When it comes to restoration and clearance cases, nothing matters without sobriety.

Feelings aside, the practical reality is that concerns and issues not specified in the law don’t matter in the context of a license appeal. Here’s what I mean:

Everyone who has lost his or her license will say how much they need to drive, but “needing” a license is NOT a legal issue in the license appeal process. In fact, as one of the veteran hearing officers puts it, “everybody needs a license.”

Everybody needs money, too, but unless a person takes the right actions to get some (like getting a job), then all the “needing” in the world won’t make a bit of difference, and certainly won’t make it happen.

Even then, a person has to be qualified for any given job. I’m a lawyer with 30-plus years of experience, but I know nothing about being a plumber, and could never be employed as one because I don’t have what it takes.

Yet for as true as that is, it’s only natural for people to think certain things matter, even though they don’t, and I’m sure my team and I do that all the time when it comes to subjects outside our field of practice.

For example, I remember when my wife and I kept seeing water drip into our basement from under our refrigerator, and I was sure that the water line connected to it was the problem. We were upset that there was not shut-off valve from the water line to the fridge itself, and we just “knew” that if we could cut off the flow of water, that would fix the problem.

Later, however, we discovered that our model of refrigerator had a design defect that caused excessive icing in the freezer. The drip had nothing to do the with the water line, and the actual fix was to install a new part to replace the one that didn’t work properly. A shut-off wouldn’t have made a bit of difference.

In that same way, people have a lot of mistaken beliefs regarding what matters in a license appeal case. After more than 30 years as Michigan driver’s license restoration lawyers, my team and I have certainly heard it all. Here is a short list of some of the most common things people say that, as strongly as they may feel about them, don’t matter:

It sounds cold, but the truth is that none of those things are the least bit relevant to winning. Neither, for that matter, is the fact that a person completed his or her DUI sentence and paid everything.

Instead, what really matters in a license appeal is sobriety. Without it, a person can’t win, but even if he or she truly is sober, they still have to prove it to the satisfaction of the hearing officer assigned to their case.

While it’s understandable that nobody likes to lose, there is a whole other dimension of statements people make in anger and frustration after being informed they’ve been denied. Here are several of the most common:

This is bull$hit!
This isn’t fair!
Drinking is legal!
I’ve never had a problem with marijuana!
They’re just going to force me to be a criminal because I have to drive!
I know other people who have gotten their licenses back and they drink!
They want me to say I’m an alcoholic, but I’m not!

We hear that last statement all the time, and when it’s made, it is a telltale sign that a person is not genuinely sober.

Although the Michigan Secretary of State isn’t necessarily waiting for someone to describe themselves as an alcoholic, anyone whose license has been revoked for multiple DUI’s is PRESUMED, by law, to have some kind of alcohol problem, and has, no matter what, demonstrated themselves to be a risk to drive drunk after drinking.

This is important, because, in Michigan, if a person is convicted of 2 DUI’s within 7years, or 3 (or more) DUI’s within 10 years, then he or she will be legally categorized as a “habitual alcohol offender.” That designation carries a legal presumption that he or she does, in fact, have some kind of drinking problem.

This means it is a foregone conclusion that anyone filing an appeal to try and get his or her license back after multiple DUI’s has some kind of drinking problem.  He or she will, therefore, have to prove that he or she has quit drinking, and has both the ability and commitment to stay quit.

Everything about the driver’s license restoration process is based upon and otherwise directly connected to sobriety. That’s the simple bottom line.  It is a non-negotiable requirement to win a license appeal that a person must be genuinely sober, and the key to success in any case is actually proving that.

The main rule governing license appeals sets out the legal issues and the standard by which they must be proven. I’ll put up the rule first, and then explain, in short order, what it really means.

As written, Rule 13 provides as follows:

We can reduce all of that down to 4 key things:

We can boil this down even further into a rather simple, single statement:

The hearing officer is required to deny a license appeal unless the person who files it proves, by clear and convincing evidence, that he or she has been COMPLETELY alcohol-free (problem “under control”) for a legally sufficient period of time (our firm generally requires a person to have been clear for at least 18 months before we’ll move forward with a case), and has the ability and commitment to remain alcohol-free for the rest of his or her life (problem “likely to remain under control”).

In other words, a person has to prove that he or she has really quit drinking and is a safe bet to NEVER drink again.

We’ll stop here for now, and pick up from this point in part 2.