The law specifies that, in order to win a Michigan driver’s license restoration case, a person must submit proof that meets the “clear and convincing evidence” legal standard. Every license appeal case is decided by a hearing officer, each of whom is a trained professional tasked with evaluating the evidence submitted, listening to what is said, and then concluding whether or not it meets that standard. This installment will tie in to the previous article about how any notion of “you tell me what I need to say” is almost proof-positive that a person is NOT sober, and in no position to win a license appeal. 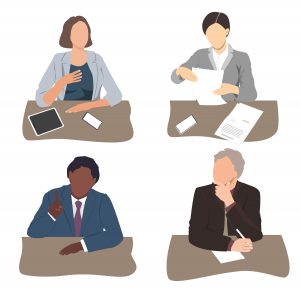 The inspiration for this piece, like so many others, came from our senior assistant, after another busy day at the office. As we got ready to close up shop one recent afternoon, she remarked that some people mistakenly think they can BS the hearing officers, and that’s because these folks don’t have a clue about the skill those hearing officers bring to their jobs. Unless someone does license appeals for a living, they simply can’t grasp the absolutely central role of the hearing officer, and the depth of experience they have listening to people testify. In the context of a license appeal, that can be a fatal mistake.

It’s critical to understand that, in addition to the key role the hearing officer plays in all of this, he or she does so pursuant to very specific rules, and very clear instructions spelled out in the law. This is huge, but also largely overlooked, and is no doubt one of the reasons that so many license appeals (and especially those of the “do-it-yourself” variety) wind up getting denied. By contrast, our firm GUARANTEES to win every restoration and clearance appeal case we take (more on that later), precisely because we understand the subtleties of the law and rules, and the role of the hearing officer in applying them.

This can all seem rather complicated at first, but it’s really not, and a little bit of explanation will make it quite easy to grasp. To help clarify, let’s first set out Rule 13 (the main rule governing license appeals), and then I’ll essentially “translate” and simplify it after:

So what does all this mean?

Let’s begin by looking at the opening words: “The hearing officer shall not order that a license be issued to the petitioner unless the petitioner proves, by clear and convincing evidence, all of the following:”

That sentence is critical, because it contains 2 very clear instructions:

1. The hearing officer is directed to NOT grant (in other words, to DENY) an appeal unless –

2. The person proves his case by what that sentence further specifies as “clear and convincing evidence.”

Put another way, the hearing officer is basically supposed to begin every case with “no” as the answer, and only change his or her mind if the person who filed it proves what the rule requires by “clear and convincing evidence.”

In a number of past articles, and in one very recently, I explained what “clear and convincing” means, so we don’t need to get into that here, other than to point out that, as a legal standard of proof, it’s very near the “beyond a reasonable doubt” standard needed to convict someone of a criminal offense.

Although Rule 13 sets out several legal issues, there are 2 that are mandatory in every case, and they are spelled out in subsection “i.” This is where we’ll do a little analysis before we summarize things. Just to repeat, subsection “i” provides as follows:

“That the petitioner’s alcohol or substance abuse problems, if any, are under control and likely to remain under control.”

Now, forget about the words “if any” in the sentence above. In other words, read that sentence as follows:

That the petitioner’s alcohol or substance abuse problems are under control and likely to remain under control.

The reason the “if any” language doesn’t matter is both a matter of law, and a matter of practice. Here’s why: In Michigan, anyone convicted of 2 DUI’s within 7 years, or 3 or more DUI’s within 10 years, is legally categorizes as a “habitual alcohol offender.”

An important consequence of being categorized as “habitual alcohol offender” is that any such person is also PRESUMED, by law, to have a drinking problem.

This means that when someone files a license appeal after having his or her license revoked for multiple DUI’s, he or she is automatically assumed to have an alcohol problem. No matter what anyone may think or feel about it, the fact is, that’s the starting point for every Michigan driver’s license restoration and clearance case.

The idea that a person starts out presumed to have a drinking problem can be a complete obstacle for anyone who thinks they don’t. To be clear, that arguments is, without exception, the fastest way to lose a license appeal, and do long-term damage to any chances to ever win one in the future.

Accordingly, the key to winning a Michigan driver’s license or clearance case is proving the following 2 things:

• First, that the person’s alcohol or substance abuse problems are under control.

• Second, that his or her alcohol or substance abuse problems are likely to remain under control.

Now, let’s look at what all that really means…

Someone’s alcohol (and/or substance abuse) problem is considered to be “under control” when he or she has been completely abstinent for a legally sufficient period of time. This can vary from case to case, but in our office, we will generally never move forward with an appeal until a person has been alcohol-free for at least 18 months.

What people often miss is the need to have been COMPLETELY abstinent from alcohol (and everything thing else, including recreational marijuana). Thus, if someone took a sip of champagne at a wedding toast, then he or she hasn’t been completely abstinent. Ditto if someone had a glass of wine with a holiday dinner or shared a beer.

Abstinent means totally alcohol and drug-free, as in having consumed nothing – not a drop, not a sip, not a hit off a joint, nada.

A person’s alcohol (and/or substance abuse) problem is “likely to remain under control” when he or she has intentionally quit drinking (and/or using any drugs, including recreational marijuana) and has both the ability and the commitment to never drink (or use any other substances) again.

A key component of that is the intention to remain clean and sober for life.

Personally, I am amazed at the sheer number of people who think they can appear before the Michigan Secretary of State for a license appeal and BS the hearing officer about this. That’s just not going to happen…

The Michigan Secretary of State hearing officers are professionals; they are lawyers who, in the role of administrative law examiners, spend pretty much every moment of their working lives evaluating evidence and deciding whether or not a person has submitted “clear and convincing” proof that his or her alcohol problem is both under control, and likely to remain under control.

Even though it’s their job to make a decision using that legal standard, what really underlies their work is a search for the truth. Before the reader thinks that’s some “suck up” statement, let me explain:

Most of that day-to-day experience that hearing officers have is being lied to by people who claim to have been alcohol-free, and who will try and spin some BS story about having quit drinking for good.

In the previous article, I detailed some of the telltale signs of real sobriety. The decision to quit drinking and get sober is huge, and following through with it is life-changing. The hearing officers know, through both training and experience, how to question a person to discover whether he or she has really gone through all that’s required to actually get and stay sober.

Even if a person isn’t good at speaking, the very act of having made the profound transformation from drinker to non-drinker is fairly easy to uncover with the right questions.

By contrast, even if someone is a skilled BS-er and a great “salesperson,” NOT having gone through that transformation leaves a void of experience that simply cannot be faked.

Unfortunately, though, that doesn’t stop some people from trying.

To be clear, my team and I want NO part of any of that. We screen potential clients to make sure they’ve quit drinking, because when we take a case, we guarantee to win it, and the last thing we would ever want to do is get stuck having to do “warranty work” for someone who actually hasn’t quit drinking.

In fact, it is an exception to our guarantee for a person to misrepresent his or her abstinence or sobriety. Even if someone offered to pay us our full fee and was willing to skip the guarantee altogether, we wouldn’t do it because we simply do NOT want to handle a case for anyone who is not genuinely sober.

At the end of the day, winning a driver’s license appeal – or not – comes down to proving to the hearing officer, by clear and convincing evidence, that one’s alcohol (and/or substance abuse) problem is under control, and that it is likely to remain under control.

Thus, a person must first be genuinely sober, and then we have to prove that to the hearing officer, who is legally required to be skeptical, and who starts every workday expecting people to come in and lie about having quit drinking, about their marijuana use, both past and present, and about their ability and intention to remain clean and sober for life.

For us, as Michigan driver’s license restoration attorneys, as long as we have a sober client, we can take care of the rest, and we guarantee the results.

If you are looking for a lawyer to win back your Michigan driver’s license, or to remove a Michigan hold on your driving record so that you can get a license in another state, be a wise consumer and read around. Pay attention to how different lawyers analyze the license appeal process, and how they explain their various approaches to it.

When you’ve done enough of that, start checking around. You can learn a lot by actually speaking with a live person. My team and I are very friendly people who will be glad to answer your questions, explain things, and even compare notes with anything some other lawyer has told you. We can handle your case no matter where you live.