One of the 2 main things every person must prove in order to win a Michigan driver’s license restoration or clearance case is that his or her alcohol problem is “under control.” As Michigan driver’s license restoration lawyers, my team and I regularly have to explain to people that “under control” means a person is not drinking at all , and not that he or she is somehow trying to limit or manage their drinking. In this article, we’ll examine what the term “under control” really means as interpreted and used by the Michigan Secretary of State in license appeal cases. 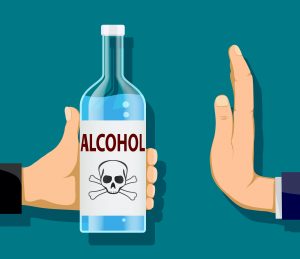 To really get a grasp on this, a person must first understand the way the law works. This part of things is actually not as complicated as it might seem, and is really quite easy to follow. In Michigan, if a person winds up having been convicted of 2 DUI’s within 7 years, or 3 DUI’s within 10 years, he or she will be legally categorized as a “habitual alcohol offender.” One of the consequences of this categorization is that the person’s driver’s license will be revoked because he or she is considered too risky to be allowed on the road.

Here’s why that happens: Another consequence of being designated a “habitual alcohol offender” after racking up multiple DUI’s, a person will also be presumed, by law, to have some sort of alcohol problem. This is where people often get confused or frustrated, because they misunderstand this, and feel like the state is, in a manner of speaking, pointing a finger at them and saying “you’re an alcoholic.” That’s not the case, so stay with me while I explain this in a way that will clear things up.

Ultimately, the reader may not agree with the way the law works, but at least he or she will understand why it functions the way it does:

It worth first pointing out that the “habitual alcohol offender” designation is important – not just in it’s own right – but also because, beyond being a legal term, it essentially describes the way society at large feels about people who rack up multiple DUI’s.

On the flip side, it’s natural for someone going through their own 2nd (or subsequent) DUI to want to explain themselves, and how they got into the whole drunk driving situation again, but to the rest of the world, none of that really matters as much as the simple fact that the person just seems “risky,” and even downright dangerous.

That might not be what someone wants to hear, but that’s just the way things are.

Now, let’s jump ahead for a moment: Except for certain cities in the US, just about everyone, everywhere, needs to drive. This is especially true for us in the Greater-Detroit area of Michigan; we’re not New York City, where a person can hop on a subway train to just about anywhere. It’s hard – and can be extremely hard for some – to get by without a license here.

To be honest about it, our bus system in Metro-Detroit (which is our entire “transit system”) is the envy of absolutely no one. You can’t help but feel sorry as you drive by and see some poor soul standing in the cold or the rain or the snow waiting for a bus to show up.

Better you than me…

In fact, about the only thing the Metro-Detroit bus system is good for is to serve as a model for any other place to evaluate so as NOT to screw things up so badly….

Therefore, it’s inevitable that just about everyone who loses their license is going to want it back – especially anyone who doesn’t have convenient and reliable mass transit available.

Driver’s licenses are issued by the state, so it is the state that sets the rules regarding who can get back on the road, who cannot, and how those decisions are made. A successful license restoration appeal must ultimately based on evidence and proof that a person isn’t a risk to drink and drive again, not his or her mere promises not to do it again.

Of course, absolutely every person who has lost his or her license for multiple DUI’s will promise they’ll never drive drunk again. However it’s probably also the case that almost every person made that very same promise any number or times, starting right after his or her 1st DUI, and following every one one after that.

The state, therefore, is understandably skeptical, given that every person who has racked up multiple DUI’s had made and broken that very promise any number of times before.

Expectations, hope and promises aside, there is only one iron-clad guarantee in the DUI world, and it’s this: People who do not consume alcohol are exactly zero risk to ever drive drunk.

Not surprisingly, then, the rules governing Michigan driver’s license restoration and clearance appeals are designed to single out these people from everyone else.

The main license appeal rule (Rule 13) provides that, in order to win a restoration or clearance case, a person must prove 2 things by what the law specifies as clear and convincing evidence:

First, that his or her alcohol and/or substance abuse problem(s) are “under control.” The practical translation of this is that a person must prove that he or she has been completely alcohol and drug free for a “legally sufficient” period of time. We’ll come back to this shortly, because it’s the really the whole point of this article.

What a lot of people don’t get about this is that there is absolutely no allowance or room for a person to ever to consume ANY alcohol (or, for that matter, to use marijuana) again.

Remember, the state is taking the safe bet.

Is it clinically possible that someone may have gone through an unlucky phase with his or her drinking and driving, and somehow accumulated 2 DUI’s without actually having an alcohol problem?

Is it likely, however?

The State of Michigan, for its part, and through the written law, has decided that, rather than screw around with any more broken promises or take any chances, and for the safety of the rest of society, anyone who has lost his or license after multiple DUI’s can only get it back if and when he or she can prove they’ve completely severed any relationship with alcohol.

That starts with proving a person’s presumed alcohol problem being “under control,” which, as we have seen, means that a person has completely given up drinking.

Remember, the law categorizes anyone who gets 2 DUI’s within 7 years, or 3 DUI’s within 10 years, as a “habitual alcohol offender” and therefore presumes that he or she has some kind of drinking problem. This doesn’t necessarily mean that a person is any kind of “alcoholic.” Indeed, it can even mean that someone who rarely drinks is just considered too “risky” simply because of his or her DUI record.

Clinically speaking, though, the chance that anyone with 2 DUI’s doesn’t have a drinking problem is rather remote, and when you’re talking about 3 or more DUI’s, no matter how far apart they occurred, it’s a foregone conclusion that he or she has some kind of troubled relationship to alcohol.

The Michigan Secretary of State, for its part, has decided that once someone loses the privilege to drive after racking up 2 or more DUI convictions, it’s not going to take any chances, and will therefore only consider re-licensing a person who can show he or she has been alcohol-free long enough and who can demonstrate both the ability and commitment to never drink again.

In our office, we generally require a person to have at least 18 months’ of clean time before we’ll plow ahead with a license appeal case.

No matter how much a person may not like it, and no matter how strongly he or she may disagree with it, in the context of a Michigan driver’s license restoration or clearance appeal, having one’s drinking “under control” means NOT DRINKING.

As simple and straightforward as this is, lots of people just don’t get it.

There is no contrary argument that can be made here. Instead, the state has established a clear requirement for getting one’s license back.

I’m reminded of this variation of the Golden Rule: He who has the gold makes the rules.

Some people, frustrated by all this, speak of driving as a “right,” but it is not. The law is beyond settled on this point. A license to operate a vehicle on the public roads is a privilege, and a person must meet and maintain certain requirements to have one, and meet others to ever get it back if that license has been revoked as the result to multiple DUI convictions.

For all the things that go into Michigan driver’s license restoration cases, having one’s alcohol problem “under control” simply means having been completely alcohol-free for that legally sufficient period of time.

As we have seen, in addition to having one’s alcohol problem under control, a person must also have both the ability and commitment to remain alcohol-free for life. In other words, after proving that he or she has given up alcohol, the person must demonstrate him or herself to be a safe bet to never drink again.

This may not be the information someone wants to find, but it’s the simple truth, and, whatever else, it should be clear that there is no room in any of that for another drink.

If you’re looking for a Michigan Driver’s License Restoration lawyer to win your license back, or obtain the clearance of a Michigan hold on your driving record so that you can get a license in another state, do yourself a favor and be a smart consumer. Read around, and see how other lawyers explain the license appeal process and how they explain their various approaches to it.

As long as it involves a Michigan revocation or hold, our firm can can your license appeal case no matter where you live. All of our consultations are free, confidential, and – best of all – done over the phone, right when you call. We guarantee to win every initial restoration and clearance appeal case we take.