As Michigan driver’s license restoration lawyers, my team and I concentrate in winning back driving privileges for people who have had their licenses revoked as the result of multiple DUI convictions. No matter what, in any and every license appeal case, the focus is, and always be, upon a person’s drinking; specifically, when he or she last drank, their decision to quit, and his or her resolve to never drink again. In every way possible, license reinstatement cases are all about proving sobriety. 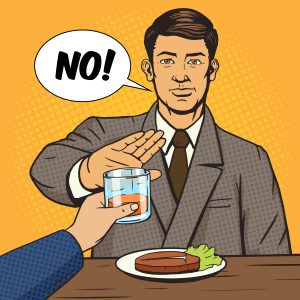 n other words, the whole point of the driver’s license restoration in Michigan process in Michigan boils down to whether or not a person can prove that he or she has given up drinking, and is truly committed to remaining alcohol-free for life. The way the Michigan Secretary of State (and just about everyone else in the world) sees it, anyone whose license has been revoked after racking up multiple DUI’s is too dangerous to be allowed on the road, unless and until he or she can prove they’re not a risk to drive drunk again, and that, in turn, is done by showing themselves to be a safe bet to never drink again.

Underlying the consideration of restoring driving privileges for those who have lost them as the result of 2 or more DUI’s is that the simple proposition that people who do not drink are exactly zero risk to drive while intoxicated. These are the only people who have a chance at winning a license appeal. As we’ll see, the written law is clear that a person must not only prove that he or she has been completely abstinent from alcohol for a “legally sufficient” period of time, but also that he or she has both the ability and the commitment to never drink again.

It is the lucky minority of people who can demonstrate themselves to be truly invested in life-long sobriety who are that safe bet, and they are the only one the law contemplates putting back behind the wheel. Accordingly, anyone who even thinks he or she can ever drink again isn’t a candidate to win back his or her driver’s license.

Of course, some people might take this as a clue that all he or she has to do to win a license restoration or clearance case is say they have quit drinking, and promise that he or she will never consume alcohol again. However, the entire purpose of the license appeal process is to verify such claims, and screen out those who are the real deal from everyone else who will just say so.

Here’s what a lot of people don’t really get: The Michigan Secretary of State hearing officers who decide these cases know that, every single day, they’re going to be lied to about this.

Moreover, the written law expects that to happen, so it has structured the license appeal process to be very thorough, and it is guided by the idea that it’s far better to deny the restoration of driving privileges license for someone who really is sober but whose proof may not reach the required standard than it ever is to put some risky drinker (who may be a good talker) back on the road.

By operation of law, anyone convicted of 2 DUI’s within 7 years or 3 DUI’s within 10 years will have his or her driver’s license revoked, and be categorized as a “habitual alcohol offender,” a designation that also creates a legal presumption that he or she has a drinking problem.

In point of fact, it means that anyone who has to file a license appeal following a revocation for multiple DUI’s is presumed to have some kind of problem with alcohol.

As some people find out the hard way, the quickest way to lose a license appeal is to try and argue differently.

Remember, the state is ONLY looking to take the safe bet and reinstate driving privileges for people who present no risk to ever drive drunk again because they don’t drink.

The process, therefore, doesn’t allow for consideration of someone’s explanations like, things are different now, or that they’d never drive after drinking, or that they only drink at home, or only drink once in a while, or only on special occasions, or only moderately, like enjoying a glass of wine with dinner.

Absolutely none of that will fly.

However, and as I’ve already noted, a lot more is required to win a license appeal than just saying the right things, and not saying the wrong ones.

In some of my other articles in the driver’s license restoration section of this blog, I explain that one of the most important facets of Michigan driver’s license restoration law is the specific choice of words at the very beginning of the governing rule. As that phrasing makes crystal-clear, the Secretary of State hearing officer deciding a license appeal case is specifically directed NOT grant it (in other words, he or she is instructed to DENY it) unless the person proves certain things by what the law defines as “clear and convincing evidence.”

The 2 most important of those things, both of which apply in every case, are as follows:

First, that the person’s alcohol problem is “under control.”

This means that he or she has quit drinking, and has remained completely alcohol-free for a legally sufficient period of time. The exact amount of necessary clean time someone needs can vary from case to case, but our firm will generally never even consider moving forward with an appeal until a person has been abstinent for at least 18 months.

Second (and directly relevant to the point of this article), is that his or her alcohol problem is “likely to remain under control.”

This requires a person to prove that he or she is a safe bet to never drink again. There are no exceptions, qualifications or other interpretations of that beyond the simple, plain meaning of “never drink again.”

Remember, the license appeal process is about screening people to make sure they are genuinely sober and truly committed to remaining so, and not merely saying so.

However, once someone has developed a troublesome relationship to alcohol, actually quitting and then staying quit can be very difficult. To really quit drinking and then remain clean and sober is a genuinely life-changing experience, and not something that can be easily faked.

Indeed, to those who know what to look for, the markers of genuine sobriety are rather easily distinguishable from anything less. That’s why, more than what anyone says, it’s what they do (and don’t do) that really matters.

As the old saying goes, “The proof is in the pudding.”

When a person makes the decision to never drink again, and then follows that up by choosing to live a sober lifestyle, every facet of his or her life will change, and all for the better.

This gets really deep, and I mean that in multiple ways. Within the context of a Michigan driver’s license restoration or clearance case, it means that the inquiry will go beyond merely whether a person realized that his or her drinking was problematic, and then decided to stop, and bore down into what he or she has done to make sure they never pick up again.

Most people can “lay off” drinking for at least a little while. Unfortunately, in the world of recovery, a lot of people get stuck in the mistaken belief that having done that for a time, they have somehow “learned” their lesson and it will be okay for them to have the occasional drink again.

That’s not any kind of real sobriety, and it’s certainly not anything like what the Secretary of State is looking for.

Instead, and as I’ve tried to make clear in this piece, the key to winning a driver’s license appeal is proving that one has truly had enough, has hit his or her “bottom,” so to speak, and has decided to quit drinking forever.

As with all things, and as another old saying goes, “actions speak louder than words.” What a person has done to make sure he or she stays sober and never drink again will, in a very real way, speak for itself, and demonstrate that he or she has both the ability and commitment to never drink again.

That’s what it takes to win a driver’s license restoration case.

If you are looking for a lawyer to win back your Michigan driver’s license, or to clear a Michigan hold on your driving record so that you can get a license in another state, be a savvy consumer and read around. Read how different lawyers explain the license appeal process, and how they explain their various approaches to it.

No matter where you live, if your case involves a Michigan hold or revocation, my team and I can help. All of our consultations are free, confidential, and – best of all – done over the phone, right when you call.